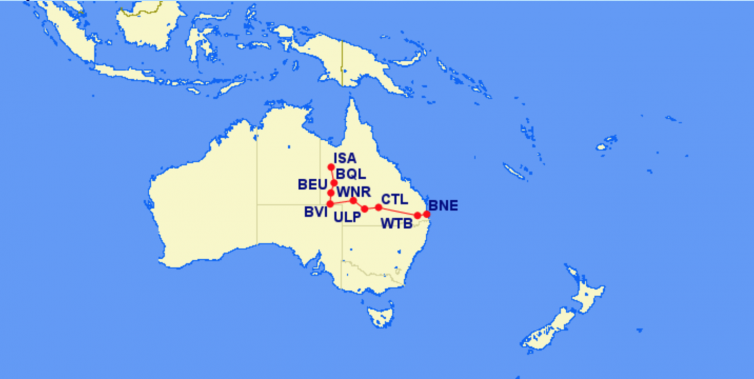 Seven sectors, eight hours and at just over 1200 miles, this is Rex’s “Milk run” – Image: www.gcmap.com

Rex operates the flight twice per week in each direction. Similarly, as with Airnorth’s “Centre Run,” the route is subsidized by the Queensland State government. Without government subsidies, many of these regional routes within Australia would not be viable and countless remote communities would be left without vital air service. The flights not only provide the communities with a much-needed link to healthcare and other vital services,  but it is also an efficient way for local residents to move between the various communities. 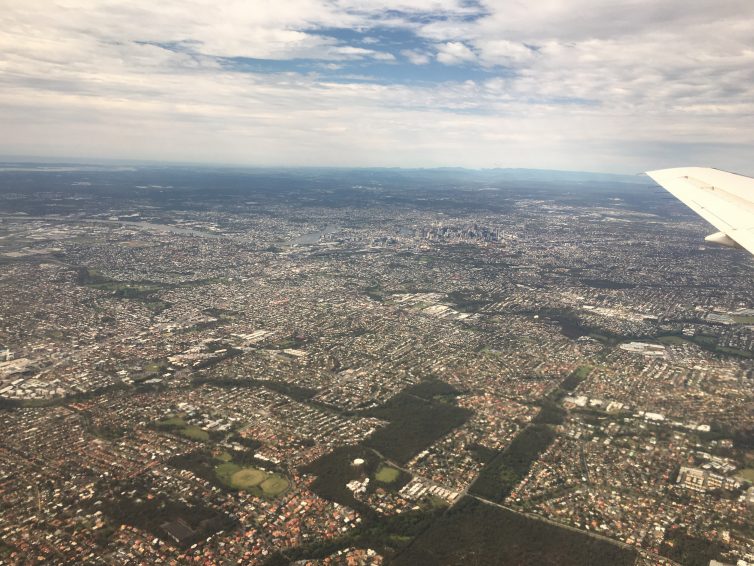 Rex offers online check-in for its flights, which is available from 48-hours prior to departure. It allows for seat selection and there is also an option to pay for extra legroom seating (or as Rex refers to it, “Rextra”) if desired. Given that it was going to be a long day and I was going to spend close to nine hours on the plane, I selected a seat in the rear of the aircraft where the engine noise was lower. 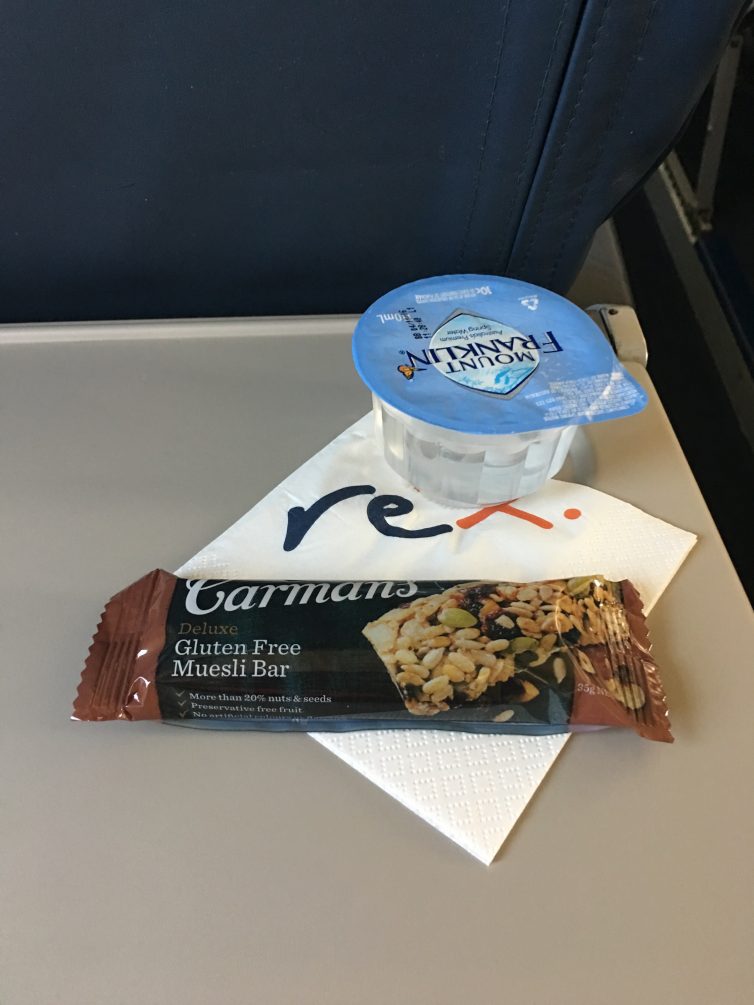 Service on the flights is basic, but always with a smile – Photo: Jacob Pfleger | AirlineReporter

Check-in and boarding was undertaken from the common user (read: low-cost) terminal. For the first flight, we had a delay of a little over an hour. This was caused by fog at our first destination airport, Wellcamp (Brisbane West/Toowoomba), but it was nice of Rex to send a detailed SMS about the delay to all passengers. The first flight to Wellcamp took only 25 minutes.

Wellcamp airport is Australia’s newest privately run and constructed airport. The airport recently came to fame when a dedicated Cathay Pacific cargo charter operated there last year and then only just last month it handled its first international passenger charter. The airport is nice, but a little too remote. It is really pushing the boundaries by calling itself Brisbane West airport. 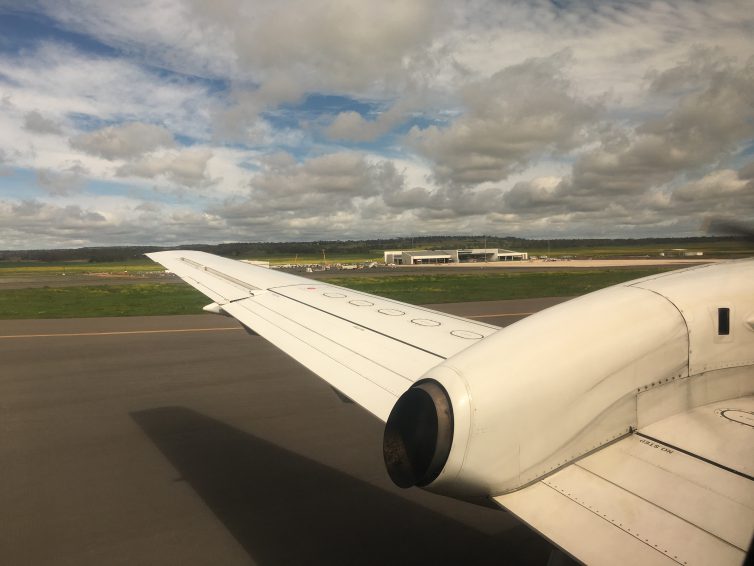 The next flight was to Charleville, which was the longest sector of the day at one hour and twenty minutes. On this flight, we were served sweet or salty snacks as well as water. Soft drinks and beer were available for purchase at very reasonable prices. A word of warning: if you do take the flight all the way to Mount Isa, make sure you get some lunch in the terminal at Brisbane to take with you; the snacks do tend to get old after the third flight. 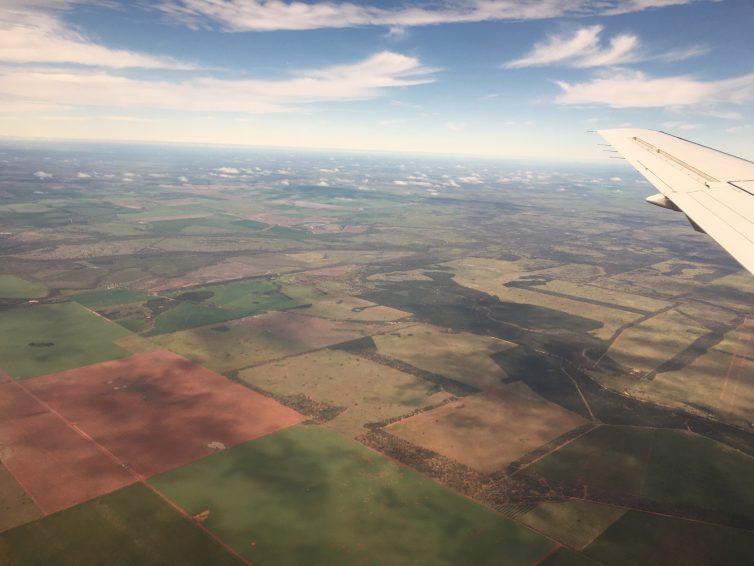 We were allowed to disembark the aircraft in Charleville, which was a nice opportunity to stretch my legs and get my first true experience of the outback: being “attacked” by thousands of flies! After our brief 30-minute stop, we continued onto Quilpie with a flight time of about 45 minutes. 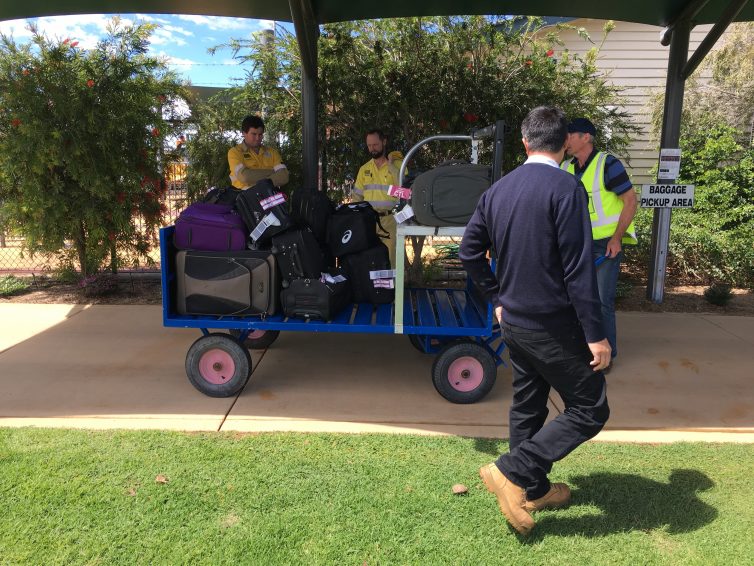 We were not permitted to disembark in Quilpie, and the crew performed a “hot turn-around” (a common occurrence in a number of locations on the trip), meaning that the right-hand engine was left on for the duration of our stop as there is a lack of ground power. Being seated in the rear of the aircraft, it was interesting to see some of the cargo being loaded/off-loaded, perhaps the most amusing cargo was the fresh beef steak and farmhouse eggs. Once again proof that these flights really do serve a vital purpose in the local economies of these remote communities. 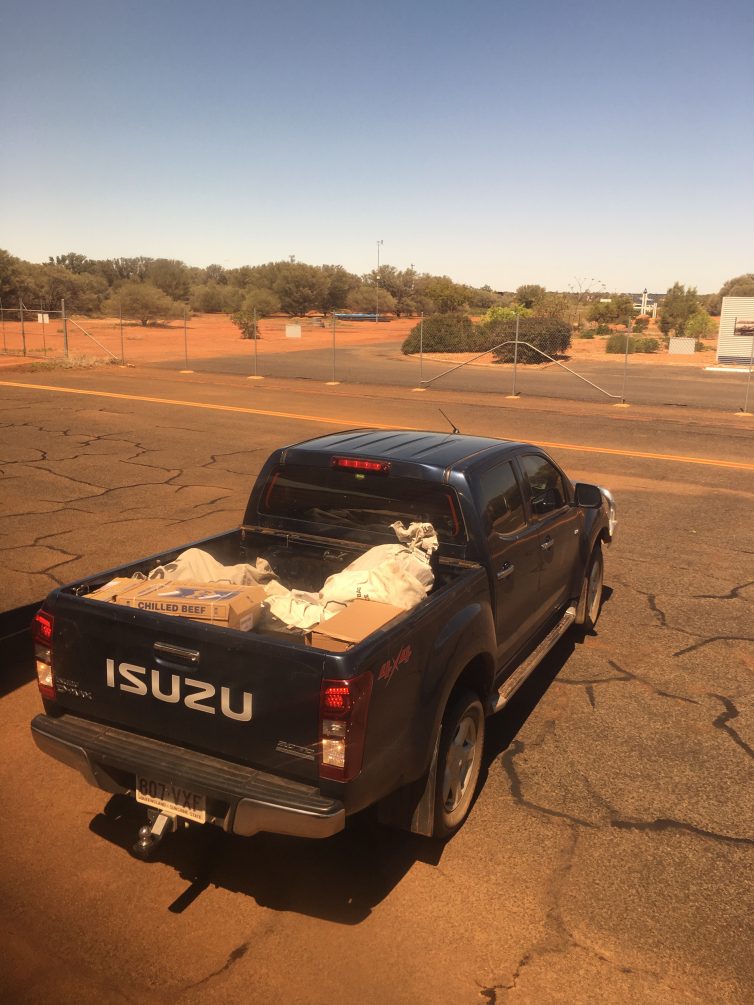 Loading some tasty cargo on the flight, if only the catering on-board were this good – Photo: Jacob Pfleger | AirlineReporter 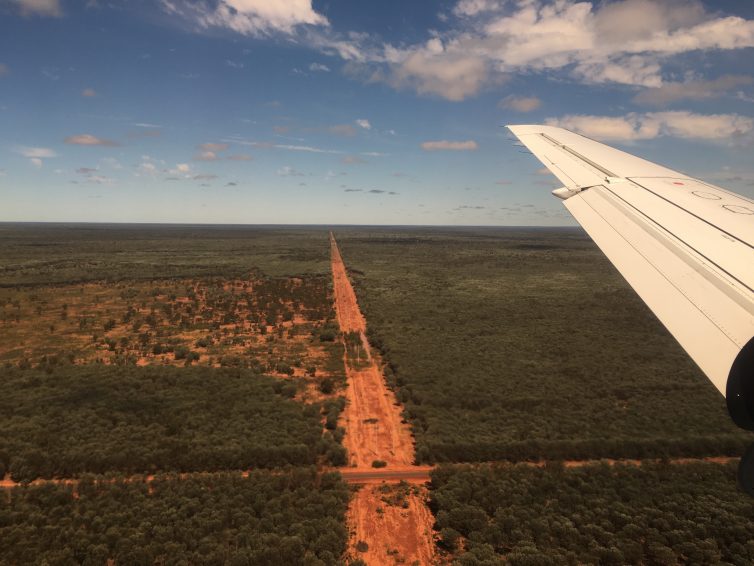 After another 45-minute flight we arrived in Windorah, with a population of around 200 (with just 60 in the town itself). This small community is literally “off-the grid.” All power is provided by giant solar panels, which dominate the landscape. There is not even any cell phone coverage at the airport; it is limited to the town “centre.” 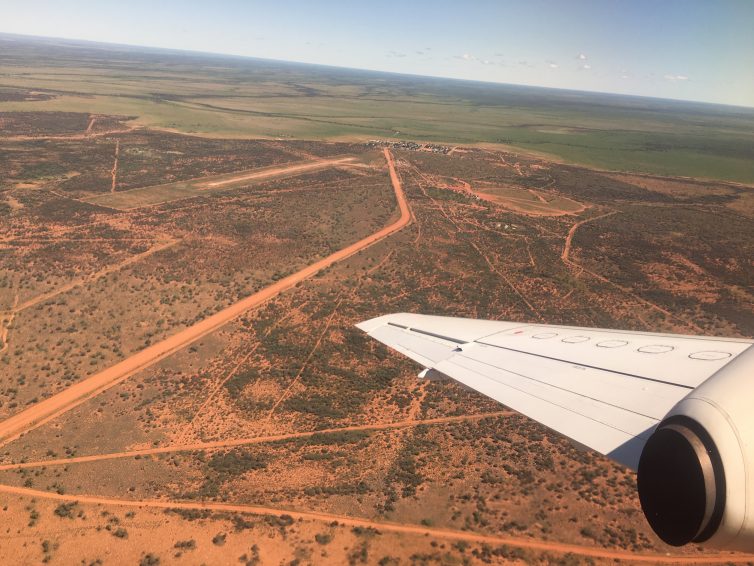 The remote township of Windorah with less than 200 residents – Photo: Jacob Pfleger | AirlineReporter 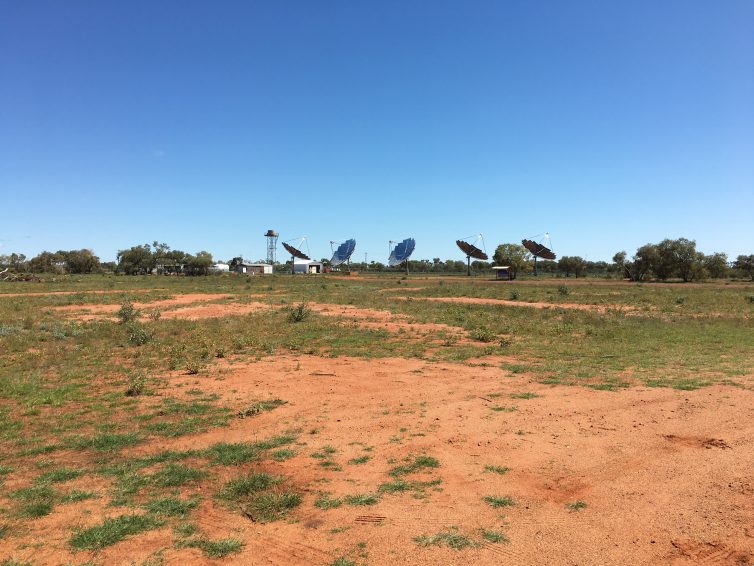 After a slightly longer stopover for refueling, as well as a crew lunch break, we were soon underway to Birdsville, Bedourie, and finally Mount Isa. Our arrival into Mount Isa was some 20 minutes ahead of our original schedule. Given our delay departing Brisbane, it is impressive that we were able to make up all of the time. I suspect Rex generously pads their schedules for these multi-stage flights to account for any unforeseen delays. 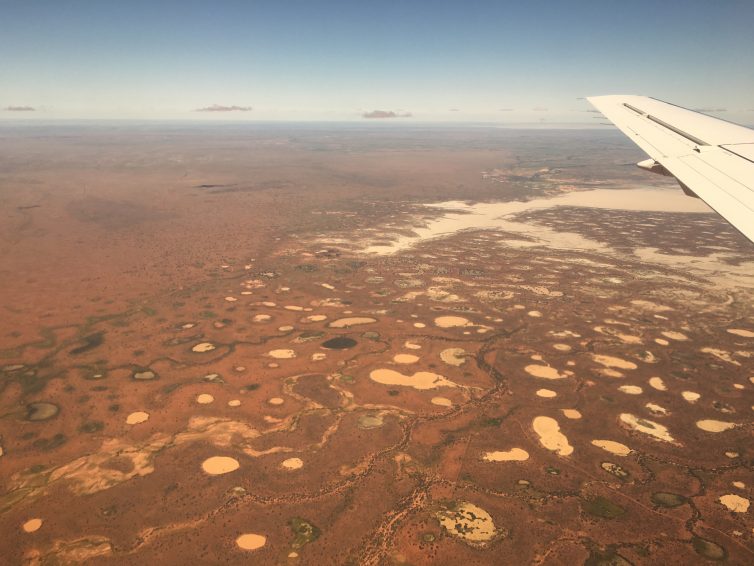 The beginning of the Simpson desert on the way to Birdsville – Photo: Jacob Pfleger | AirlineReporter

Part of me was sad to see the end of the trip, but I was not sad to see my hotel room bed in Mount Isa and the Qantaslink Boeing 717 the next day. As much as I love flying, even I have my limits. To spend over eight hours on a small regional turboprop really is quite exhausting, but even so the experience was amazing. 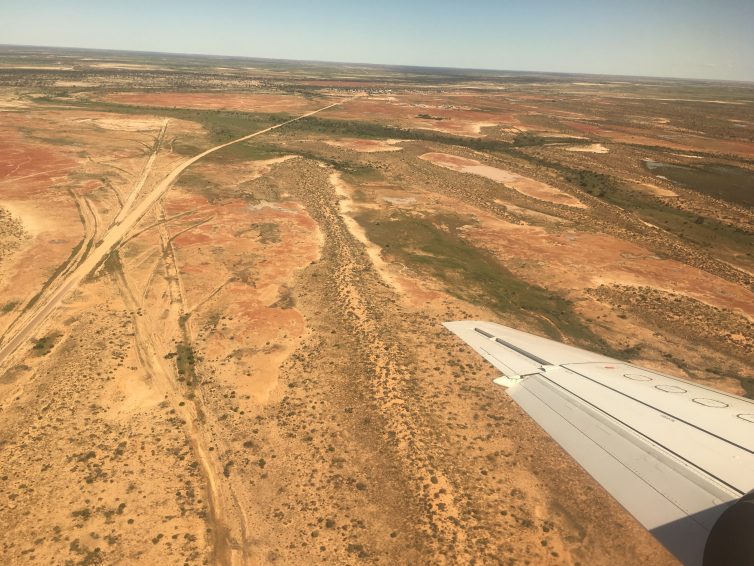 Coming into Birdsville, can you spot the airport? – Photo: Jacob Pfleger | AirlineReporter

As with my “Centre Run” flights earlier this year, the most amazing aspect of the “Milk Run” was the gradual change in the scenery. What made the landscapes even more dramatic was the fact that during September, which is traditionally the driest month of the year, there had been a record amount of rainfall in regional Queensland. 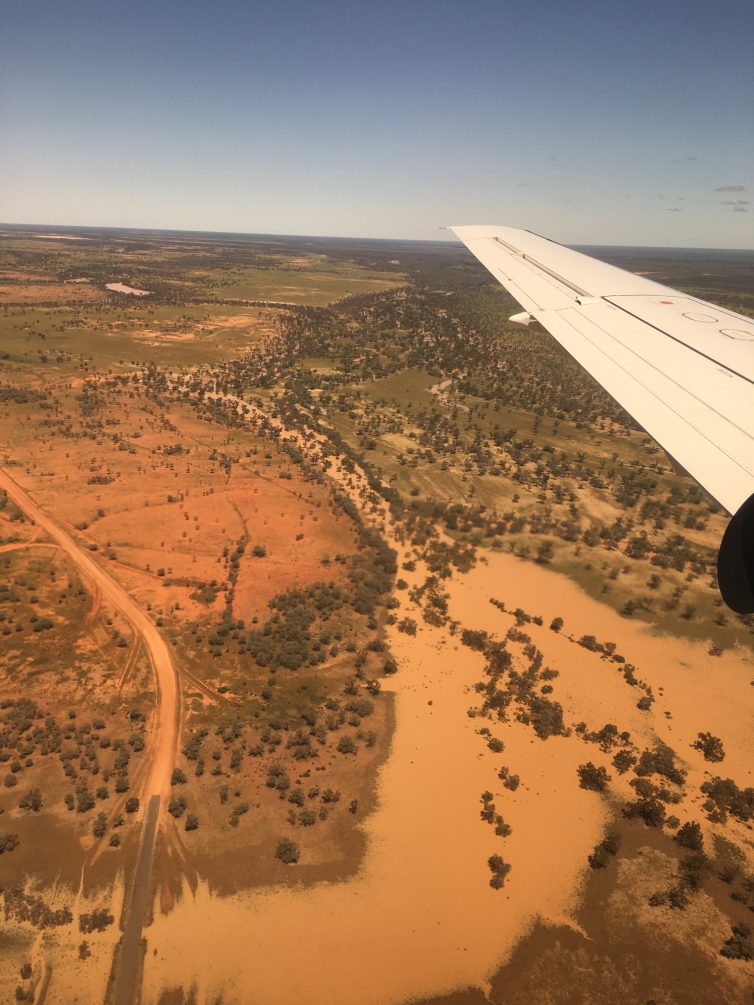 Thanks to record rainfall, the flight was very scenic and there was never anything dull to be seen – Photo: Jacob Pfleger | AirlineReporter

This provided for some magnificent vistas along the way with swollen and overflowing rivers as well as vast green areas in an otherwise barren and inhospitable landscape. It also made for some interesting discussions with fellow passengers, some of which were forced to take the flight as the roads in many places were impassable because of the flooding. Once again, this has proven the dependance that local residents have on these air services. 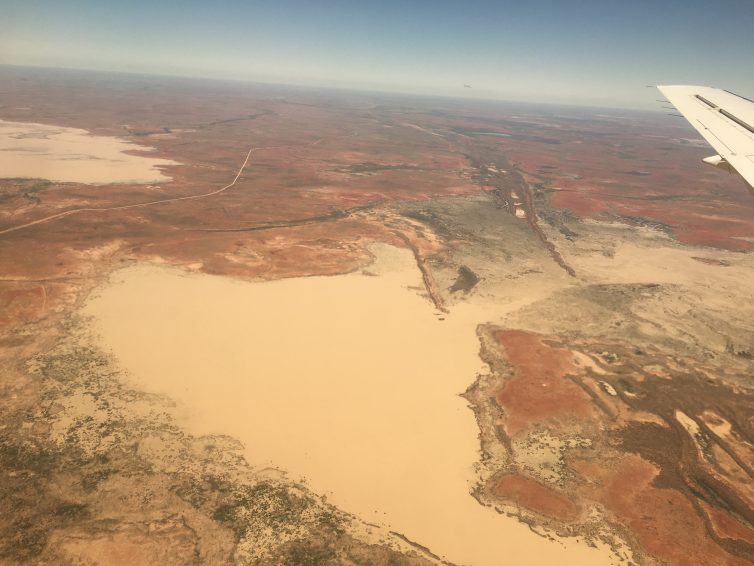 With record flooding, many residents had to resort to air transport to get between communities – Photo: Jacob Pfleger | AirlineReporter

The “Milk Run” was unlike any other flight I have been on before. Most of the passengers and crew were on a first-name basis. It resembled an atmosphere more akin to an outback pub rather than a regional aircraft. It is these sort of experiences and interactions that give me far greater satisfaction from flying than, for example, flying first class on Etihad.

You really tend to focus on the raw fun and excitement of flying rather than the on-board service, etc., which at times can detract from the true aviation experience.  It’s these sort of experiences and interactions that remind me why I am an AvGeek and that continue to drive my passion for aviation. 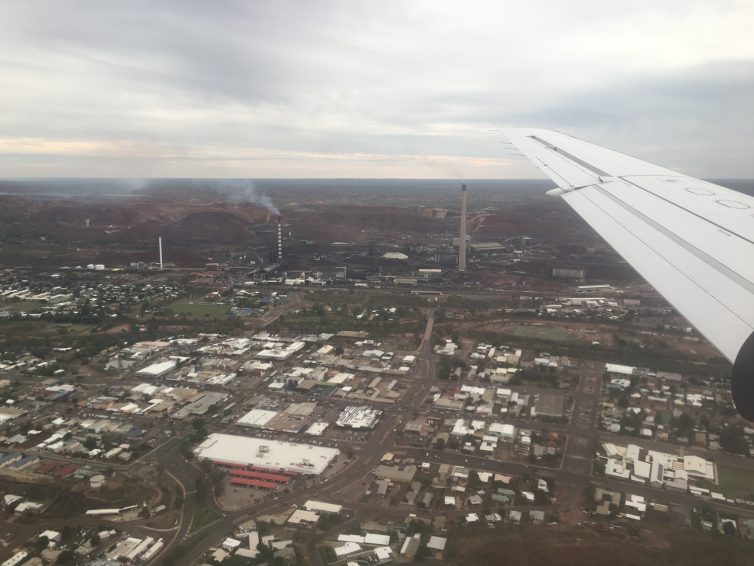 Arriving into Mount Isa after a looong day on a Saab – Photo: Jacob Pfleger | AirlineReporter

This trip has also made me truly appreciate the vastness and remoteness of the Australian outback, allowing me to have a brief taste and experience it. And, if anything, it has made me want to return and explore more in-depth this amazing part of the world. 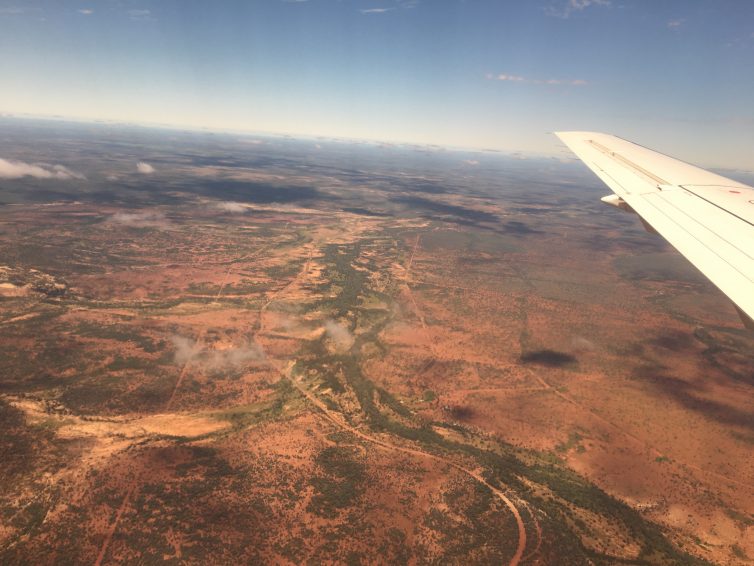 The scenery and outback spirit on these flights makes me want to come back and see more – Photo: Jacob Pfleger | AirlineReporter

https://www.airlinereporter.com
The Next Steps for AirlineReporter: Stepping Back to Move Forward
The Queen of the Skies Still Delights on EVA Air
4 Comments

How is the trip crewed? e.g. Where are they domiciled and where do they lay over? I’m hoping one crew isn’t required to do all 7 flights in one day.

All flights are crewed by the one crew as it is within duty limits.

They are based in Brisbane. They do the flight up one day go to hotel then fly back the next day.

Thankyou for posting this interesting report mate.
I hope you enjoyed flying with my colleagues.
All the best!