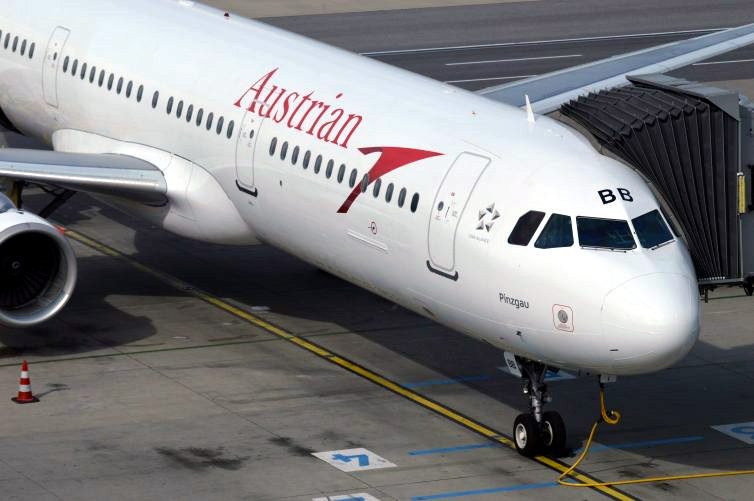 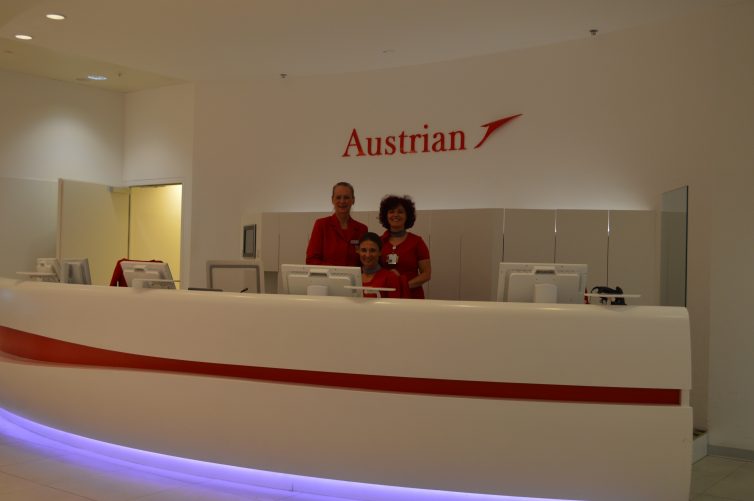 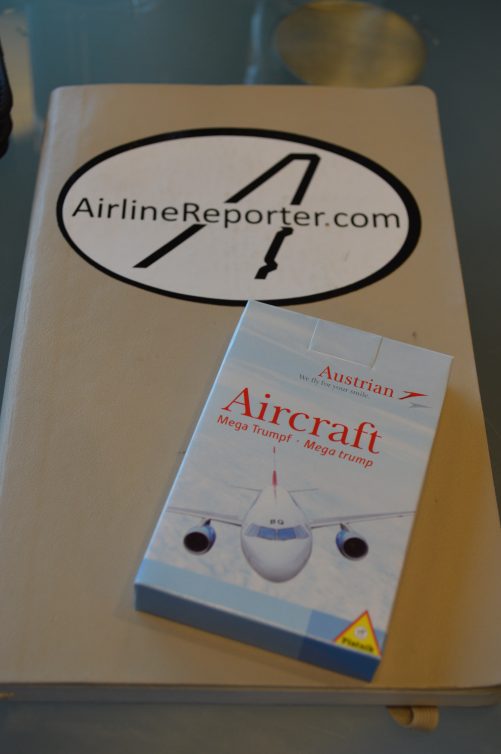 Austrian’s lounge is unpretentious and relaxing, although I suspect that more seasoned business travelers will find it a little spartan and antiquatedÂ compared to more upmarket airport lounges in hub airports around the world. The Star Alliance Sky Lounge next door looked considerably newer and more swanky. However, Austrian’s facility,Â resplendent in its red, white, and older sky blue livery (the blue is on its way out since re-branding in 2015), was peaceful, comfortable, and oddly charming in a lycÃ©e canteen sort of way. 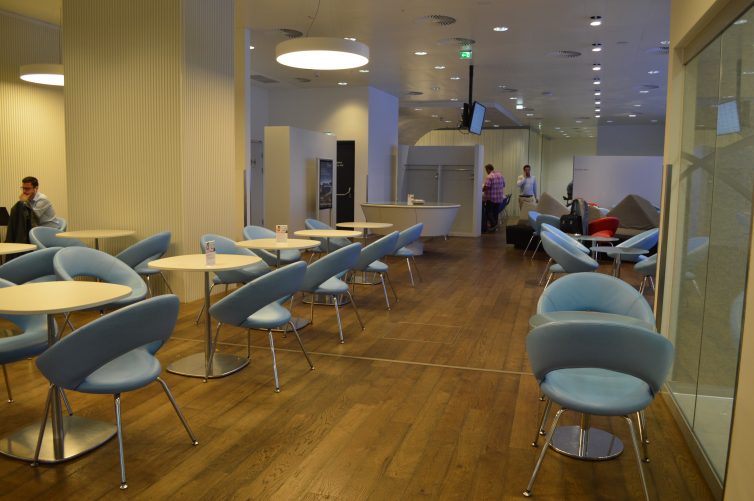 The lounge had the usual amenities, including a range of hot and cold drinks, food, international business newspapers and magazines,Â a business area with printers, WiFi, showers (upon request), and a quiet ‘relax’ roomÂ with curved recliners to snooze – all this with an appropriate Alpine backdrop. 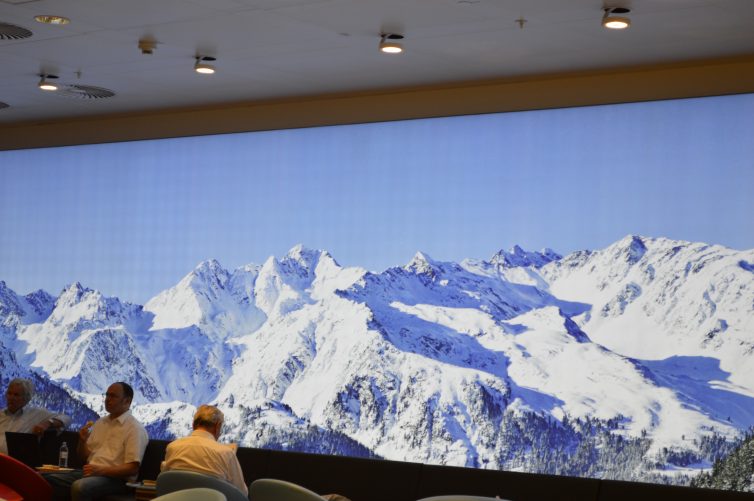 We found a nice ramp-view table and prepared to consume some of Austrian’s fare. 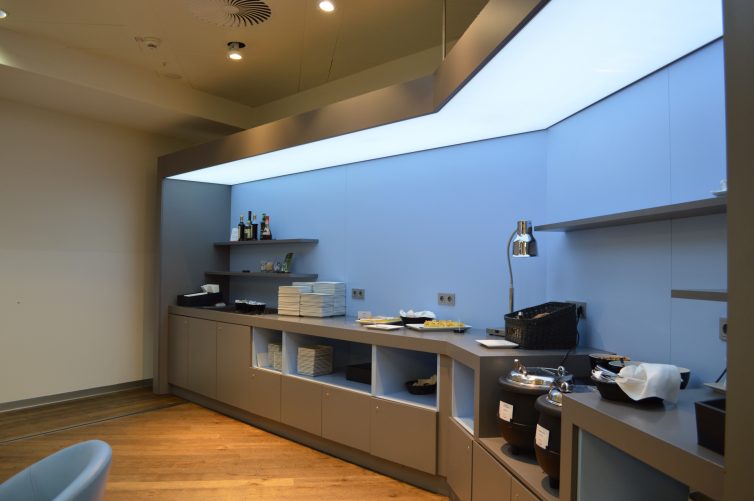 Austria produces some nice red wine. What’s more,Â the airline had some past form -Â Austrian won Global Traveler’s best business class in-flight wines in 2010. I therefore helped myself to a small glass of 2013 Esterhazy Zweigelt and then an equally small glass of 2013 St LaurentÂ BrockenÂ Burgenland. Both wines were very pleasant. 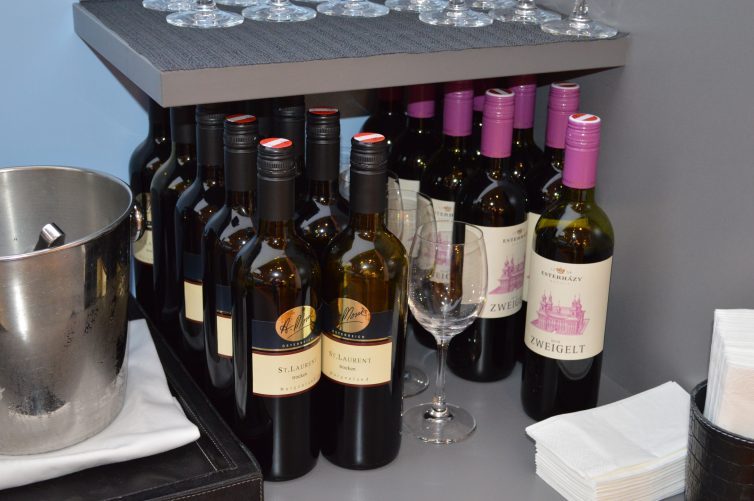 TheyÂ should probably have accompaniedÂ a bowlÂ of either rindsuppeÂ (Viennese beef soup) or erbsensuppeÂ (pea soup) with someÂ rye bread and croutons, but soup late-afternoon isn’t really my thing and I didn’t want to spoil my appetite for schnitzel. 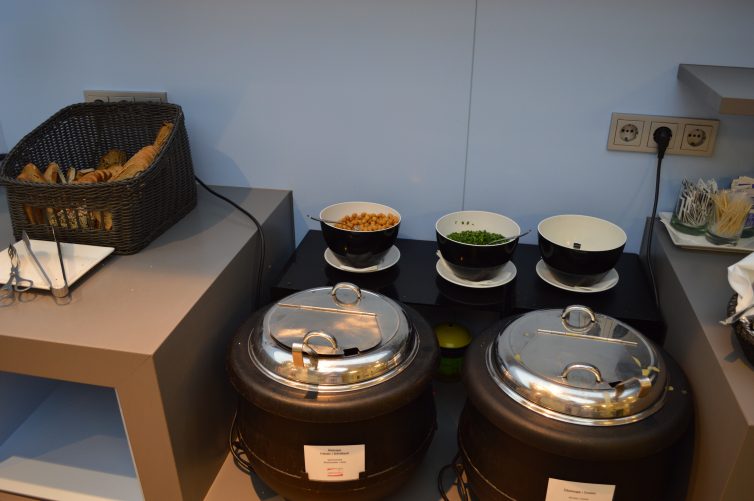 Our flight was announced at Gate G12, in the non-Schengen departures area (the UK is not part ofÂ the Schengen group of European border-less countries), so we pootled on down to the boarding zone. 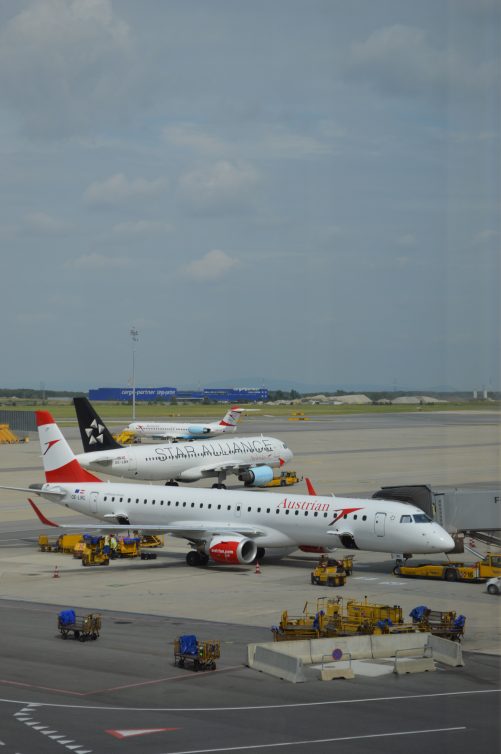 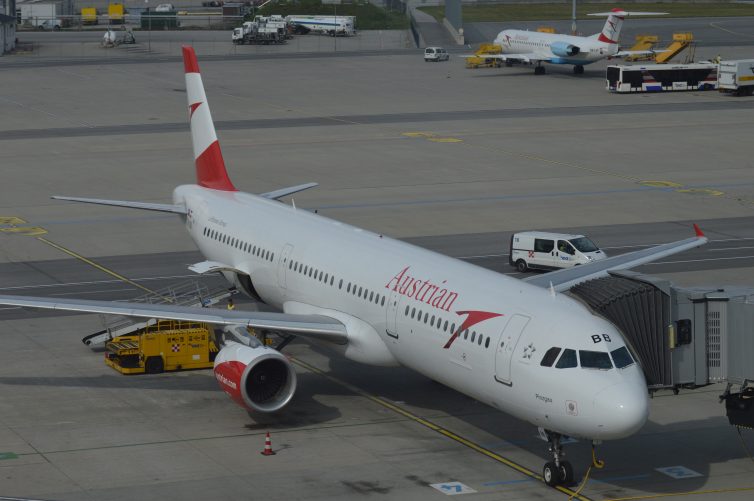 The flight was not full, so boarding the 200-seater was also quite leisurely. It naturally beganÂ Austrian’s Senator/Star Alliance Gold passengers, then those with small children, etc. The front three business class rows on the Pinzgau are separated from the rest of the cabin by a bulkhead and sky blue curtainÂ partition. The middle seatÂ is deliberately vacant. 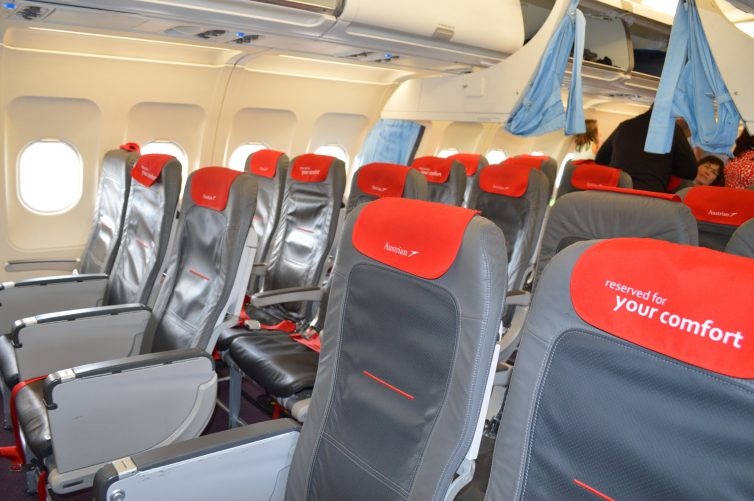 We occupied economy seats 8E and 8F, discovering to our delight that 8D would be empty – our row becameÂ business class by chance! The 18″ width seats are lightweight design with a leather finish and a small amount of recline. Pitch is 30″, which wasÂ comfortable enough for us for a two-hour sector. 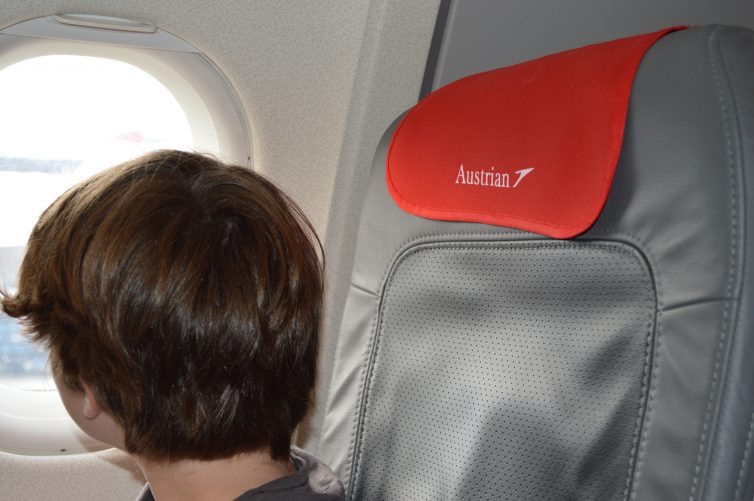 Upon boarding, my son was handed a small pack of sweets and a kids magazine. It was very touching although much of it was in German, a language that he does not yet speak. Pushback and taxiing was fast and in no time the “whining dog”-sounding CFM power plants had thrusted us forward and airborne with a lovely view of the Danube below. 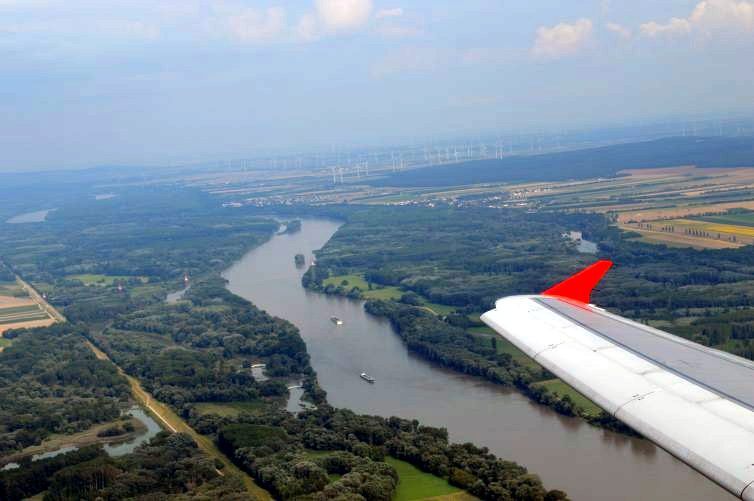 Climbing through the clouds to reach our cruising height, I caught the faintest scent of hot food. As mentioned, I had pre-ordered Austrian’s wiener schnitzel and a kids’ meal consisting of frankfurters, chicken goujons, grilled courgette, and corn-on-the cob. It struck me as a strange culinary combination. However,Â my son scoffed it all down shortly after it arrived.Â DO&CO, Austrian’s caterers since 2007, obviously know what they are doing. 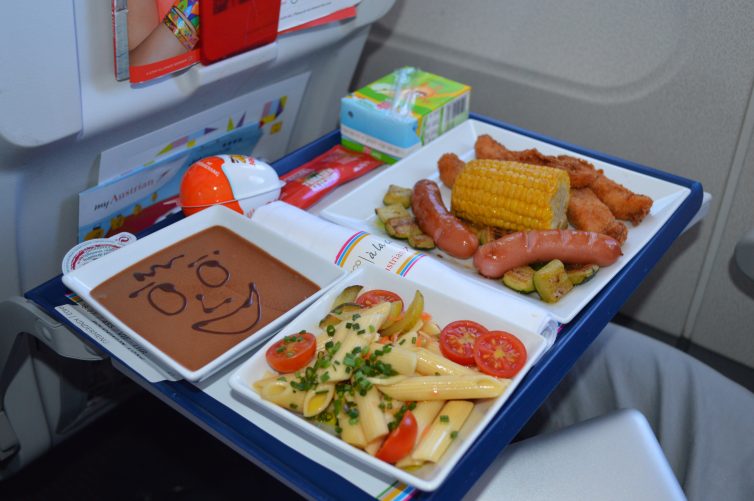 I said at the start that I had been on a wiener schnitzel recon in Vienna. Not only had I consumed schnitzel from Vienna’s premier schnitzel house, Figlmueller, but I had also eaten my way through DO&CO’s own golden breadcrumb dish at its classy restaurant on Stephansplatz in the city centre. How would this airborne one compare to the others, eaten at 37,000ft? 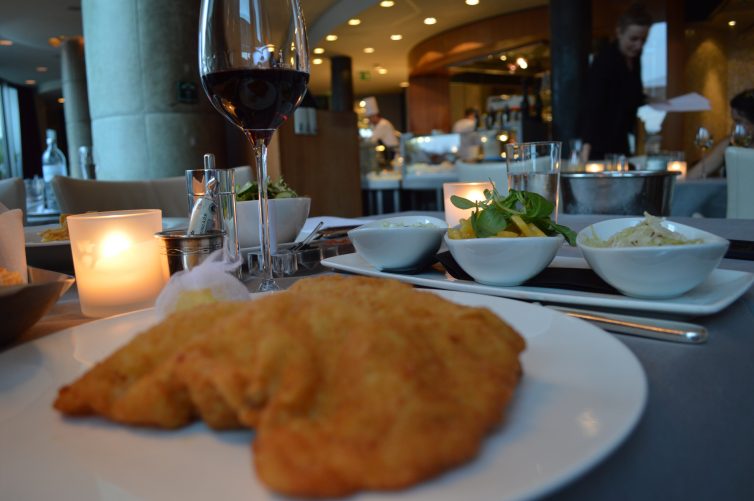 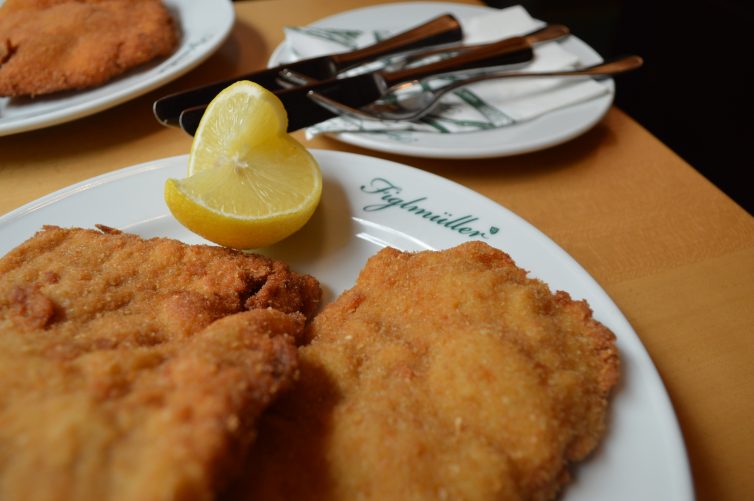 Well, this on-board dinnerÂ was a pork wiener schnitzel. Ok, so DO&CO’s short-haul offering was unlikely to beat its ground-based one (although the long-haul one is made by a sky chef, so it may come closer). Nor would it top Figlmueller’s signature dish. That said, Austrian’s portion was generous and delicious, accompanied by aÂ potato and cucumber salad, chocolate mousse, and three hot Austrian rolls in a paper bag. The tiny wooden peg to close the bag to retain the heat was a quaintÂ touch. 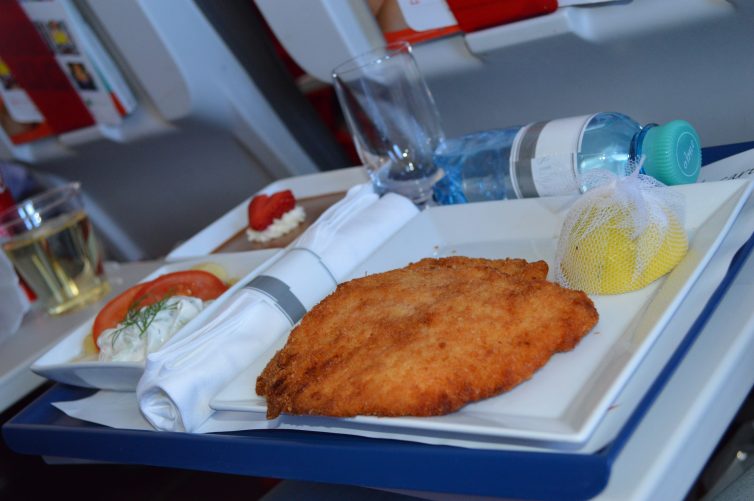 Cabin crew recommended their on-board white wine -Â a 2015 Gemischter Satz from northeast Austria – that I duly supped whilstÂ thoroughly enjoying my Austrian meal. I finished it off with some refreshingly strong coffee and sat back to read my book. The AustrianÂ a la carteÂ meal (which has nine other options) is available for economy class pax to purchase 36 hours in advance of certain flights for a supplement of 15 EUR. I thought I would have been “schnitzelled” out by then, but apparently not. This wasÂ a decentÂ treat to end a Viennese vacation. 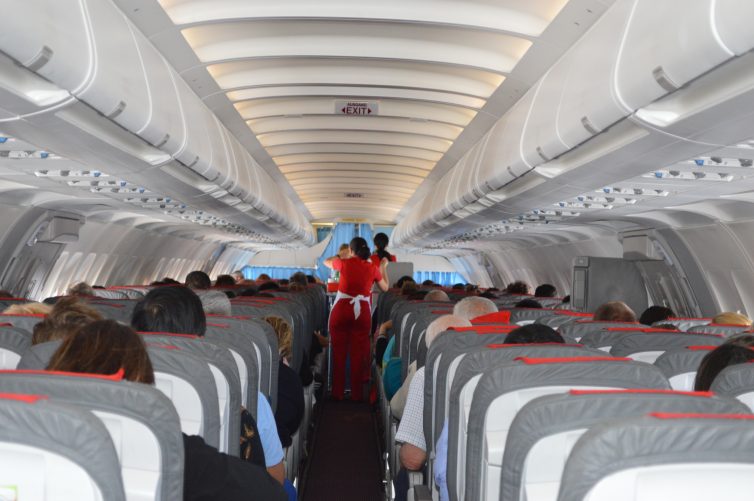 There were at least two drinks rounds. In fact, cabin crew didn’t stop pacing the aisle with aforementioned trollies, serving out hot and cold beverages aplenty. Perhaps the only downside was the natural traffic jam to get to the rear galley toilets. There was no room to pass! 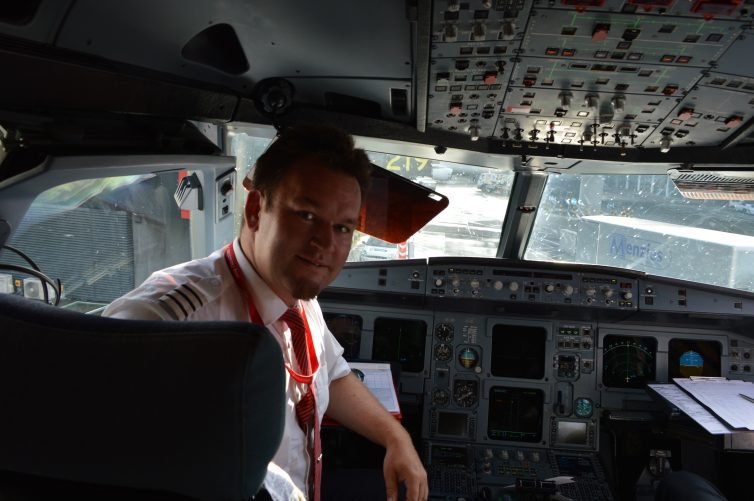 We landed in LHR on schedule and Strauss’ Blue Danube waltzÂ serenaded us as we taxied to stand – very apt, such grace and serenityÂ might evenÂ have done the Habsburgs proud. 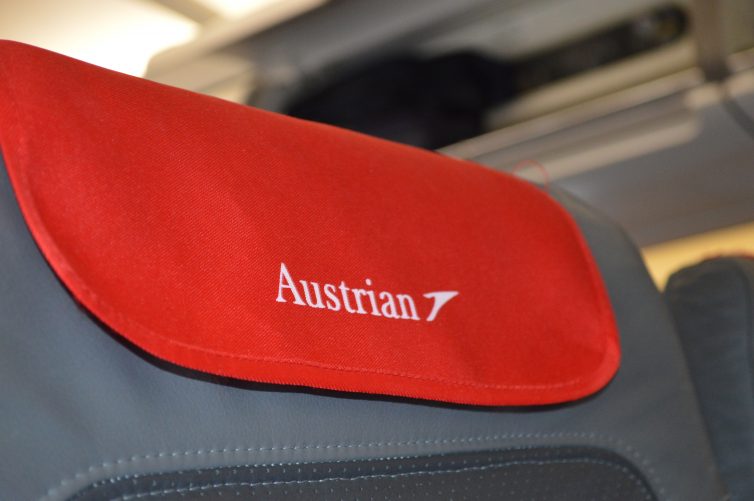 There are perhaps more cost-effective flightsÂ to Vienna from the UK. Low-cost carrier easyJet flies to VIE from London Gatwick (LGW) and Ryanair flies from London Stansted (STN) to Bratislava (BTS) in neighboring Slovakia, which is an hour’s drive, train, or boat ride to Vienna. 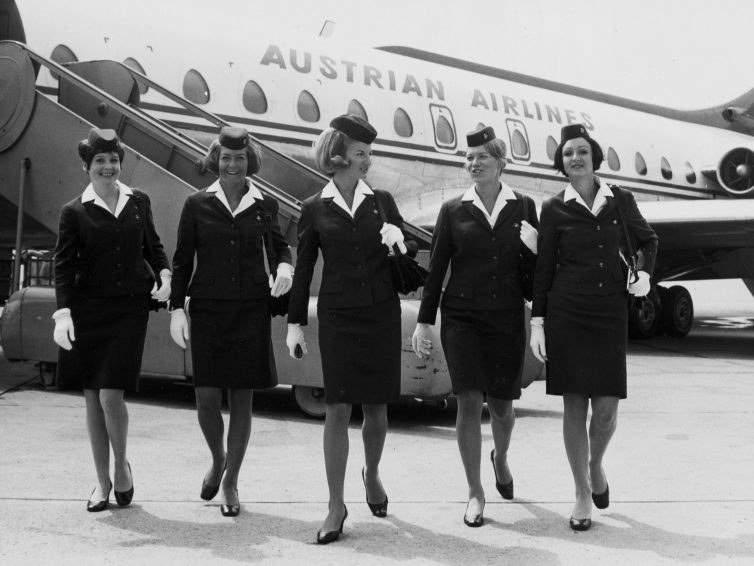 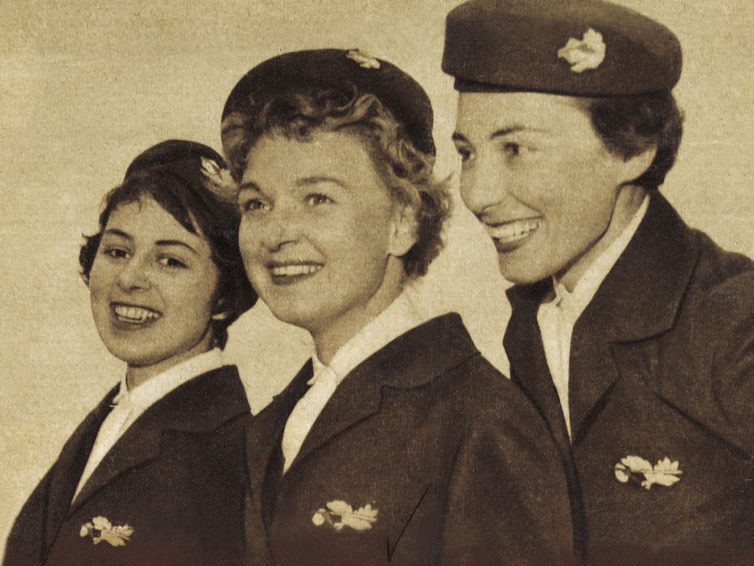 Austrian is worth the extra expense, in my view. It wasÂ one of the best European full-service short-haul flights experiences that I’ve had in a long time. Possibly the best. That is particularly nice to report since manyÂ aÂ legacy carrier’s short-haul product has beenÂ slowly trimmedÂ to compete with budget airlines. Operating since 1957, Austrian is indeed a charming airline. As the ladies above have shown,Â the smile has gone a long way.

https://www.airlinereporter.com
Behind the Scenes: When the President Flies into Town
Taking Out the Trash â€” Pitching in on an Annual Airport FOD Walk
14 Comments

30″ pitch? Sorry, that is below my minimum. I refuse to sit in anything under 31″ pitch, and actively seek out 32″-33″ pitch. When the kids are grown, I’ll probably start paying for preferred or Premium Economy seats, but now I choose my seats by choosing my airline.

Is that minimum pitch for long-haul, short-haul or for all flights generally, Mark?

All flights. I recently flew 1:10 on an AC E190 with 31″ pitch and felt jammed too tight. I’d never book anything smaller, even on a short trip.

I will admit that the headrest that pushed against my shoulders in a backache inducing way made the tight legroom feel much worse. The A320 on the return trip had enough legroom and a better headrest. Seatguru says that AC has 31-33 inch pitch on the A320. I figure this was 32″.

Are you flying regularly in Europe, Mark? Sorry for the questions, but with the likes of easyJet, Ryanair, Wizz and other LCCs covering so much of the short-haul network better seat pitch only tends to come with “extra leg room” upgrades. Your options become a bit limited, at least in economy. I’m 5’11 but have long legs so do have some sympathy.

Alastair: I’m based in Canada and don’t fly within Europe, just to and from with a connection to get to a major airport.

We don’t have much for low cost airlines here. Westjet and Porter flirt with some of the low cost practices, but they still have ~32 inch pitch in economy. Air Canada’s Rouge branch has tight pitch, but I won’t fly them unless the plus seats are cheaper than the competition’s regular seats. I’d rather go to Europe than Cuba or the Dominican Republic, so sardine charter airlines like Sunwing aren’t an option for me either. Newleaf has just started to fly as a real LCC, but only comes my way twice a week. They have 30″ seat pitch, so I wouldn’t fly them anyway.

I’m sure that seat pitch will get worse here as time goes on. I dread it. An hour in a bad seat make for many hours of pain. Preferred or Premium Economy seats are likely in my future.

My kids would never leave the plane if they got served a meal like that. 🙂

I don’t think my son could quite believe it either! He’s yet to experience any long haul flying though.

Thanks for the nice article! It was great having you on bord!!! 🙂

Thanks Teresa! The whole experience (airport and flight) capped a great few days in the city.

Thanks Cook. I overdid it somewhat on schnitzel in four days in Vienna (strictly for research purposes you understand), but it was worth it!

Great article! I was chuckling as I recently extended my connection in Vienna on my way from Amsterdam to Beijing just to pop into town and have schnitzel at FiglmÃ¼ller (I could not find my plate under that enormous schnitzel!). Austrian definitely has one of the better food services in the sky — both for the ‘domestic’ European routes as well as the international routes. The F/A can be a bit hit-n-miss, but I always find a smile and a bit of humour helps to melt the glacial exterior 🙂

OS in-flight service in Y-class short haul is absolutely dreadful! Alastair paid the 15 euro extra for a warmed-up schniztel and kids meal. If you don’t pay the 15 euro extra you get served either a bag of pretzels or a chocolate bar (Milka) and one drink in a plastic cup! I don’t know whether OS paid you for this publicity but anyone who decides to travel on this awful airline need to know the reality of life in Y-class on OS. Ironically, as a SEN, I have been upgraded on OS after having ordered a Do&Co meal for 15 euro. The C-class meal is WORSE than the 15 euro pre-order meal. In short, don’t fly OS in Europe for food. Only fly if (a) they have a route monopoly or (b) they are the cheapest ticket. Dreadful.