Being a photojournalist can mean a lot of stressful work, but it definitely has its perks and one of the best experiences for an AvGeek photojournalist is being approved for White House press credentials and covering a presidential visit. I’ve been lucky enough to do that three times, and it never, ever, gets old.

This story is not about politics; it’s about the plane, the process of transporting a head of state, and what it’s like to cover the amazing ritual that is an Air Force One arrival/departure sequence.

Presidential travels are never a simple affair; watching the ballet of security and military ritual, one can’t help but to be impressed by the sheer magnitude of managing the task. 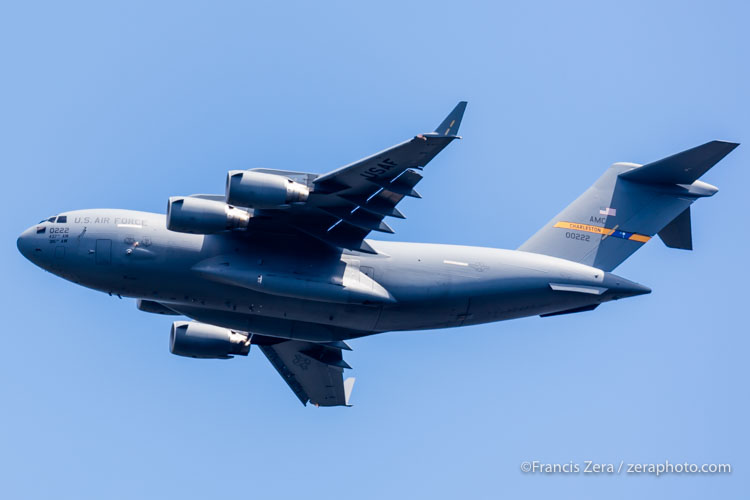 Two C-17 cargo jets first ferry in the presidential motorcade a day or so in advance of the visit. Advance teams scout travel routes and hotels, and roads are closed with little warning once the final plans have been made. This one is outbound from SEA following AF1’s departure. 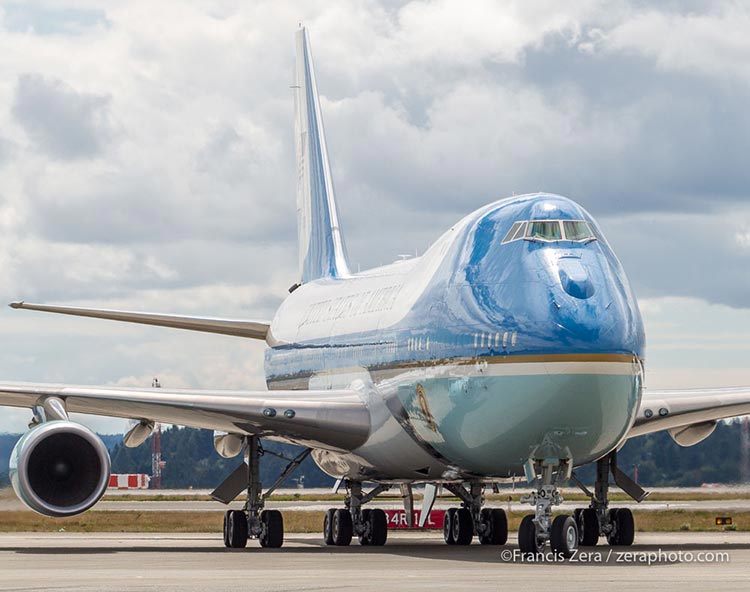 The aircraft is also one of the most recognizable symbols of the U.S. presidency and, as such, it’s treated like the flagship that it is. The plane is always kept immaculately clean. 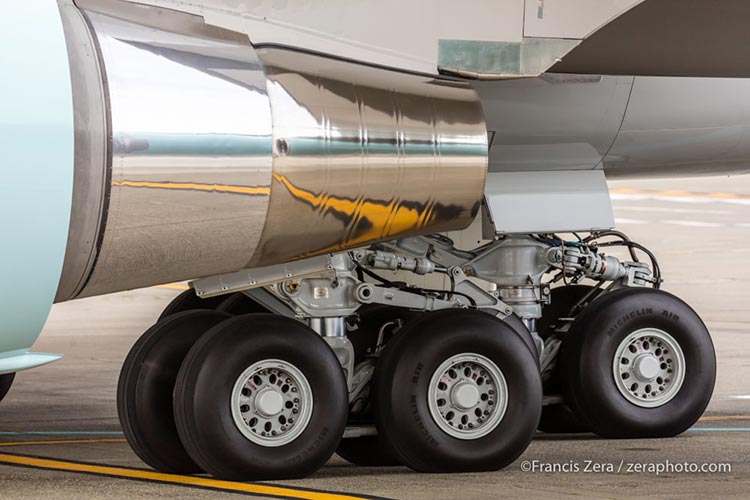 The experience of the credentialed media covering the arrival/departure process is also fascinating. Invitations to apply for credentials arrive via email from the White House Press Office. Then a simple web form is filled out and one waits and hopes that the application is approved. If all goes well, a confirmation email will soon arrive containing detailed instructions, times, and distances from the press platform to the plane so camera operators can figure out which lenses are necessary.
As you’d expect, journalists and their equipment are searched incredibly thoroughly by dogs, metal detectors, and security staff. All cameras and lenses are inspected and tested; phones, tablets, and computers are powered up and operated, and then everything is given a thorough sniff by the K-9s on duty. This is definitely unlike your standard TSA screening and, to differentiate the experience even further, the security staff are always efficient, polite, and extraordinarily professional. 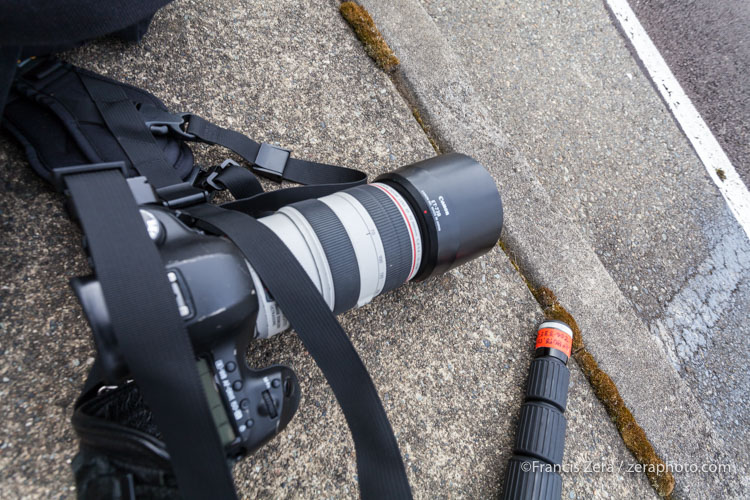 My souvenir Secret Service test photo (they normally just take a photo of the ground; this time he at least included one of my other cameras)

Once through the checkpoints, it’s time to walk through the gate and out to the press platform, which is often the back of a reasonably-large flatbed truck commandeered from a given airport’s ground fleet, or a parked flatbed trailer. 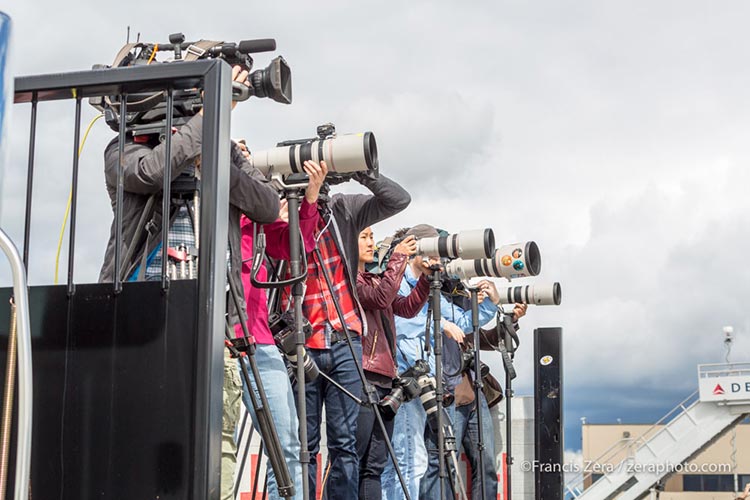 With all that gear, the platform gets crowded. The Seattle press corps are always a delight to work with.

Like many things in life, covering the event consists of a ton of waiting around punctuated by just a few minutes of frantic activity. It’s easy to tell when the president’s plane is nearing, as Air Traffic Control will call a full ground stop when AF1 is on approach no planes move in or out until the VC-25 (the military’s designation for the heavily-modified 747-200) has landed, taxied, parked, and the president and his motorcade have left the airfield. It’s a bit odd to be at a normally busy international airport and not hear aircraft noise.

Eventually, AF1 makes its appearance, gracefully glides to a landing in the way only a 747 can do, and taxis to its designated stand.

From the time the aircraft’s wheels are chocked to the motorcade’s speedy departure seldom takes more than a few frantic minutes. The airstairs are brought up, the door opens, the president steps out, offers a wave before walking down the stairs, and sometimes pops over to a VIP area for some handshakes and well-wishes (there’s not always a VIP contingent; sometimes only the press is in attendance). During that time, the motorcade has rolled up, and the two matching limousine’s doors are opened and staffed by very alert-looking men in impeccable suits. The president is always accompanied by several Secret Service agents while walking around, and, having completed the requisite number of handshakes, he heads to one of the limos (they’re absolutely identical, right down to having the same license plate number), the doors close, and the motorcade speeds off. 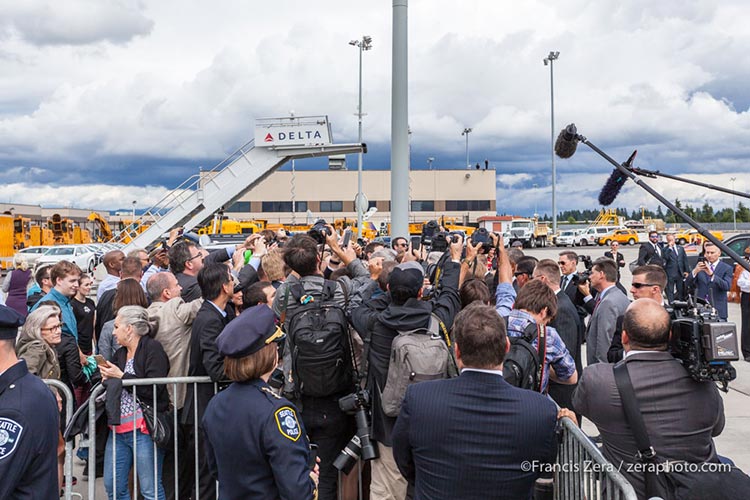 I’m sure that there’s a president in there somewhere

If it’s not an overnight visit, then there’s more waiting involved, as it’s typically easier to just hang out on the secure side instead of leaving and having to run through the security gauntlet a second time. Everyone brings their laptops and, sitting on the back of the truck, take advantage of the down time by processing and filing images and/or stories. Then, we wait some more.

Eventually the motorcade returns, and the process is reversed. Turnaround times are always impressive. At some point in the arrival process another airport ground stop is called, the president boards the plane followed by any high-ranking officials, and the boarding door is quickly closed. Everyone else (other officials, dignitaries, and the traveling press corps) boards through a built-in airstair at the rear of the aircraft. They’re all hustling to board, as the engines are already spooling up by that time. As soon as the last person is through the aft door, it’s closed and the plane starts rolling. Within five or so minutes of arrival, the plane is taxiing, then it’s away. It’d be delightful if commercial air travel were even fractionally as efficient at boarding/departure sequences. 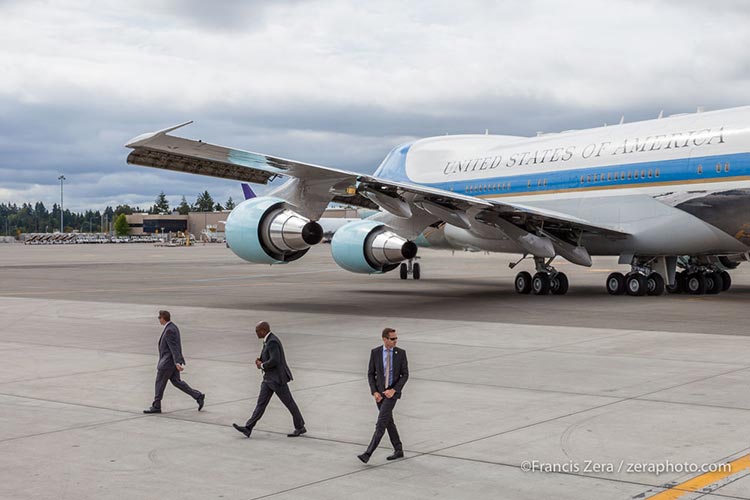 A couple of SUVs with tinted windows keep pace with the jet as it taxies and does its takeoff roll; they drop off as the plane outruns them and gets airborne. Once that happens, the mood perceptibly relaxes because the president is safely on his way, so all that remains are logistics: clear out the press area, load up the motorcade into the waiting C-17s, and get back to work. 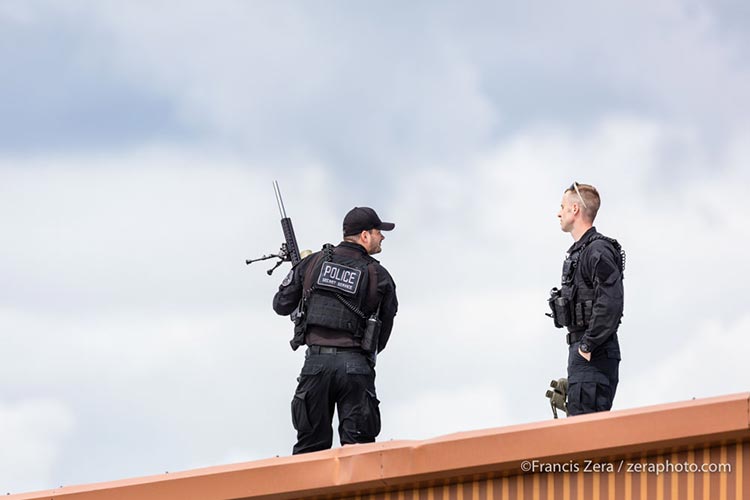 As if there were ever any doubt, presidential visits are serious business

I wonder who gets engine cleaning detail? Great story!

I usually abhor the term “American exceptionalism,” but Air Force 1 would be a prime example of it, no matter who it was carrying.

Thanks, everyone, for reading and for commenting. It was a very fun story to work on.