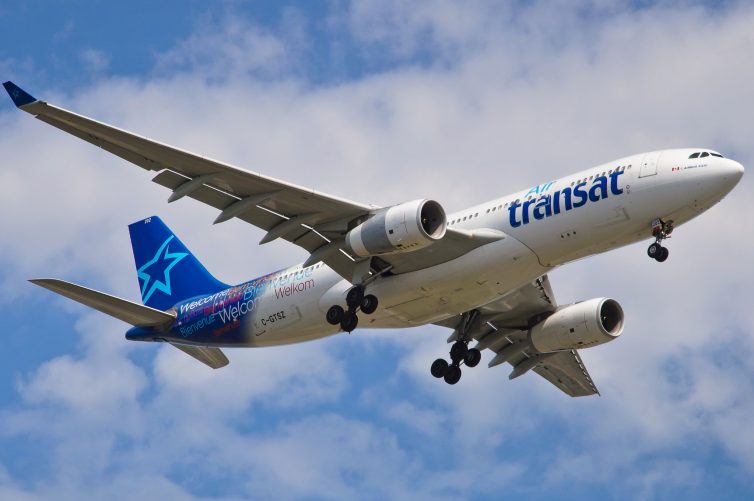 I recently had the opportunity to fly Air Transat’s Club Class on their service from Manchester to Vancouver using an Airbus A330-200.

Club Class on Air Transat is more equal to premium economy on other European carriers, or World Traveller Plus on British Airways; it is not a true business class. That said, there are only two rows of seats in a 2-2-2 configuration, the seats sport a 36-inch pitch, and there is a dedicated cabin crew member; all this makes the cabin feel very personal. 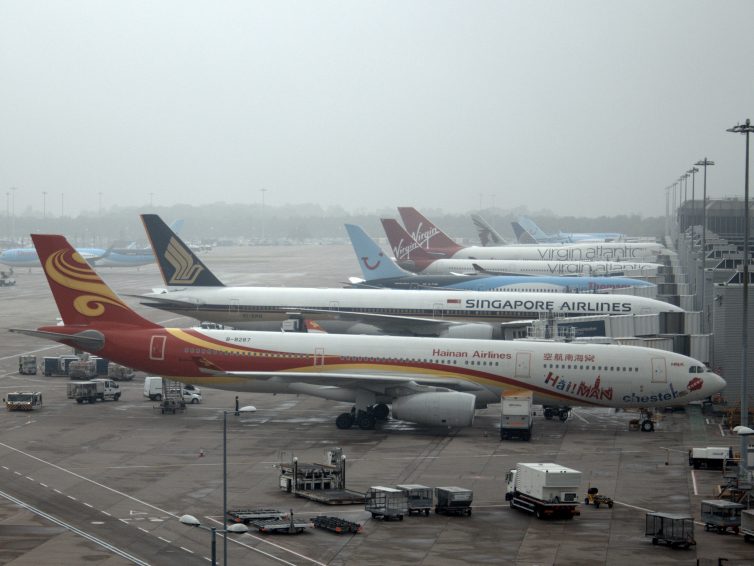 Planes lined up and ready to go – Photo: Sholto Douglas

One advantage of being at the airport so early was the opportunity to visit the top of the multi-story car park of Terminal 1 to witness the inaugural flight of Hainan Airlines’ service to Beijing; they, along with Singapore Airlines, Virgin Atlantic, Qatar Airways, and United, use Terminal 2.

Having not flown for more than five years I had read reports on local forums about problems with Manchester’s security screening and delays than can occur. Air Transat do not offer Fast Track facilities for their Club Class passengers departing the UK; however, processing was relatively painless, taking 25 minutes from entering the area to being in the departure lounge. During that time staff were heard to be calling passengers with flights departing within 30 minutes to the head of the queues, thus ensuring no missed departures. 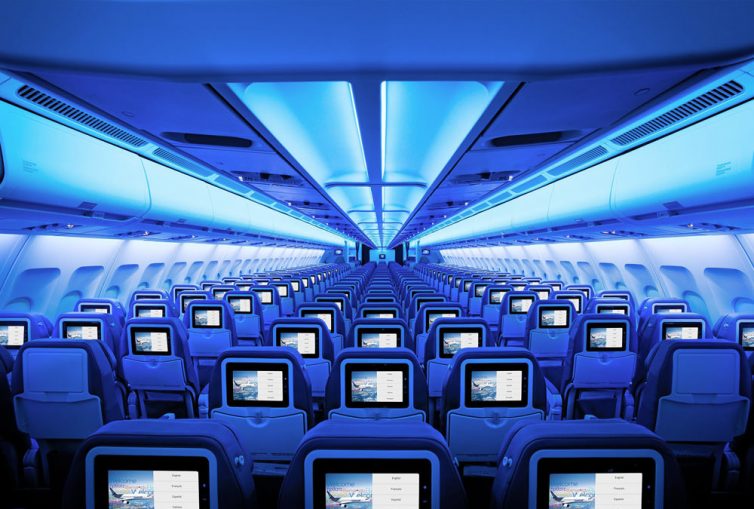 Just under an hour before departure I went down to Gate 32 in Pier C and found that boarding was already well under way. Fortunately, my check-in agent who was in the area recognized me and escorted me straight to the front of the boarding queue. On entering the cabin, at door 2L, it was necessary to walk forward by six rows into the Club Class cabin.

Having selected seat 2D, a center aisle seat, I would not be disturbed during the flight. A bottle of water was on the table, along with an amenity kit with the usual contents including an eye shade. Separately, there was a light fleece blanket and an inflatable neck collar. Although the flight was closed up and ready for departure 10 minutes before our scheduled departure time, there was an ATC delay of 40 minutes due to congestion in Scottish airspace. Whilst we awaited our slot, pre-departure drinks were offered with a choice of either sparkling wine or orange juice. As this was a holiday, I decided that the sparkling wine was a good choice.

Following push back we taxied to the holding point for Runway 23R and were airborne at 1258pm local time after a 45-second takeoff run. A right turn took us northwest over Scotland and we left Scottish airspace beyond Lewis in the Outer Hebrides. 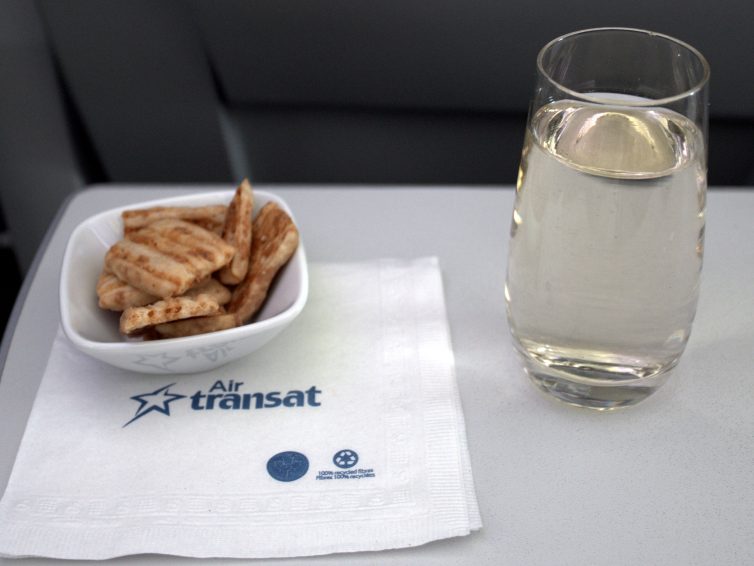 A small glass of Sauvignon Blanc as an apperitif – Photo: Sholto Douglas

Just 30 minutes into the flight, the cabin attendant came around to confirm our meal choice, for those who had pre-booked, and to advise that a drink service would start shortly. Drinks offered were the usual choice of fresh juice or various carbonated drinks. Additionally, there was a selection of sauvignon blanc, if you preferred white wine, or either a Cote du Rhone or merlot for those with a palette for red. I took the offer of sauvignon blanc and this was served in a large tumbler-style glass at a well chilled temperature with a side dish of cheese bites.

The main meal was served approximately 75 minutes after departure, which was timed nicely to fit with the UK clock. I had pre-selected a main course of roasted chicken breast with penne pasta and basil pesto sauce. The meal was presented on a cloth covered tray, with hors d’oeurve, main course, and dessert, plus biscuits and cheese all in their individual ceramic dishes. This was accompanied by more wine. The chicken was moist and well cooked, whilst the other dishes were quite acceptable. Following the meal coffee or tea was offered. 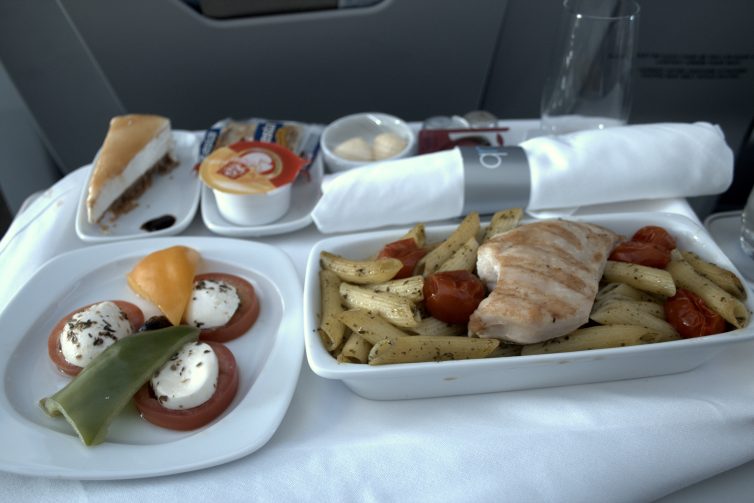 Having eaten well it was now time to recline my seat and while away some time watching one of over half-a-dozen full-length films that were available or various other offerings from the seat-back screen. Control of the screen was from a handset in the seat panel, although personally I found it easier to use the touch-screen. The seat recline button was slightly hard to find, and a fair amount body pressure was needed to recline the seat. The footrest was also rather loose and tended to wobble when you placed your feet on it.

The modern application of mood-lighting has been applied by Air Transat and this gave an airy appearance to the cabin. Catering for Club Class is from the forward galley, whilst economy passengers are served from the rear. This meant that there was very little movement of crew through the cabin. Additionally, the single forward toilet is reserved for the use of the 12 Club Class passengers and there was never a queue for the facilities.

Drinks were once again offered at 6pm – who am I to be impolite and refuse – and this was followed by either fruit or chocolate from a basket. Throughout the flight the crew were attentive within the cabin, checking whether passenger needs were being met. Two hours out from Vancouver, additional refreshments were offered and I accepted a Baileys liquor coffee – although with the cream mixed in rather than being floated on the top. This came with a chocolate cookie. 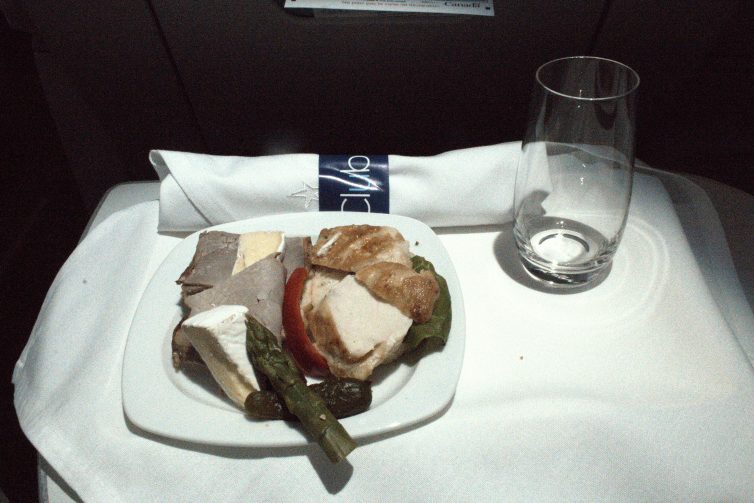 A late snack before arrival into Vancouver – Photo: Sholto Douglas

The final service came less than 40 minutes later when trays were brought with sandwiches and yet more wine. The bread was accompanied by chicken, asparagus, gherkin, beef, and camembert cheese.

On arrival in Vancouver we were fortunate to have found a gap in the international arrivals and there was no queue at immigration. My bags, which had been tagged as Priority at Manchester, were on the carousel within 30 minutes of having deplaned and less than 10 minutes after arriving at baggage reclaim.

Summary: Comparing the price paid on Air Transat against that for British Airways World Traveller Plus, via Heathrow, there was a saving of over £400 and in excess of four hours travel time. The onboard service was above expectations and the crew friendly and always attentive. With the small and select cabin there is a definite feeling of being treated as individuals, rather than just one of many. The cabin baggage allowance of 15kg was sufficient to take my full set of two cameras and lenses. Overall, it was an excellent value for money. 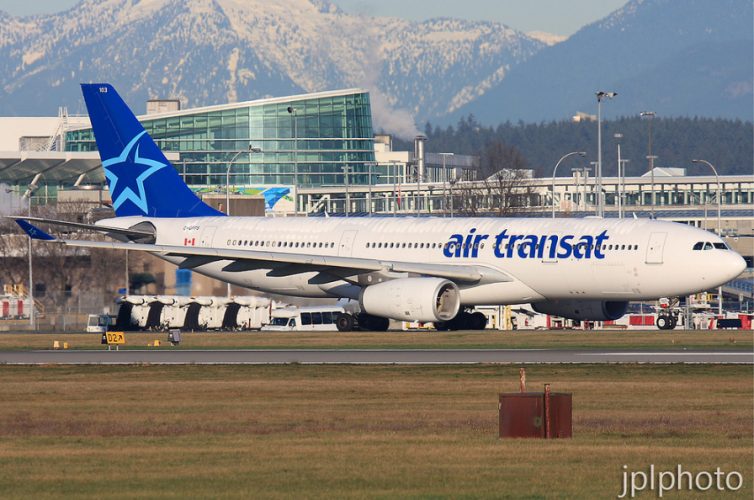 This story was written by Sholto Douglas for AirlineReporter.  Before retiring in 2015 Sholto spent his working life within the corporate travel industry – both reservations and back office. Earliest recollections of aviation would be when SABENA flew the Boeing 707 on scheduled services Brussels/Manchester/New York from April 1960. Since then he has traveled to many long-haul destinations and flown on aircraft ranging from the de Haviland DH84 Dragon,Vickers Vanguard, Convair Coronado, Vickers VC-10 and through to the modern day wide-bodied aircraft. Each has its place in his memory and its one place in history.

Really balanced review. I hope to have the opportunity to try it myself soon.

Thanks very much for sharing a very informative article about your recent Club Class flight experience with Air Transat. It was a pleasure having you fly with us and we hope to welcome you on board again soon.

Given the choice (and your own money going into the airfare), would you rather take this flight again, or, say, WS’ 767-300ER in Plus class? Or Icelandair’s seasonal one-stop thru KEF? (I’m limiting the choices to low-cost transatlantic services to keep the comparison fair)

Firstly, for clarification, my flight was a personal arrangements and was paid for by myself.

At present Westjet do not fly from Manchester and, after the rather poor start to the introduction of transatlantic services, I would be slightly cautious in adding them to my list of options. I did look at their price before booking TS but the difference was not sufficient enough to attract me – allowing for having to travel by train to Gatwick and add an overnight at an hotel.

Again I did consider FI but for some reason excluded them.

I have previously flown economy on BA ex Heathrow but find their timings to be inconvenient for both myself and those meeting me in Vancouver.

So, in summary, the Air Transat flight met my requirement and enabled me to use public transport to get and from Manchester airport.

I hope that answers your question.

That’s a perfect response! Good to know you found the perfect flight and had a good time.

Very good write up Sholto. Right to the point with just enough detail. Perhaps I missed it, but how long is this flight from Manchester to Vancouver? Thanks

Many thanks for the kind words.

Flight is scheduled as 9hrs 25mins westbound and 9hrs on the return sector.

Thanks for the update. Will be on the look out for your future postings here on AR!