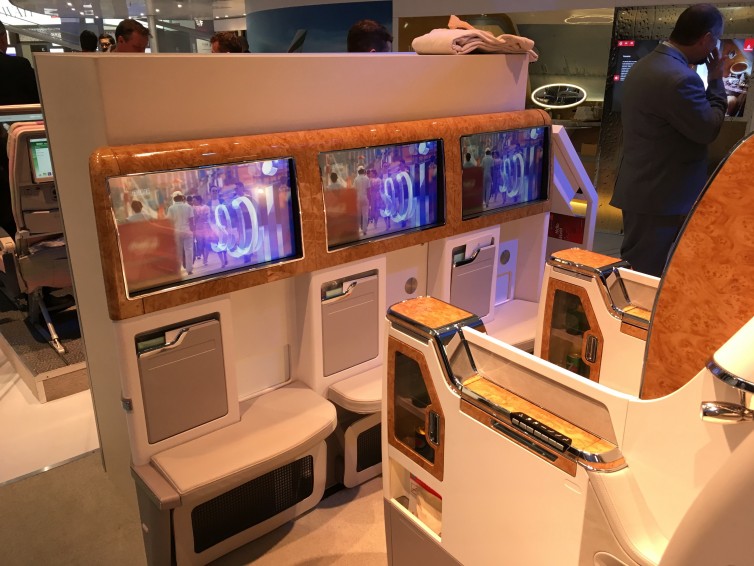 One of the welcome upgrades was the mini-bar, which is cleverly hidden into the side console. While not as big as the mini-bar on the A380 seats, it is a significant upgrade over the old seat. The biggest upgrade, however, is that now the seat converts into a true 180-degree lie-flat bed, unlike the previous product where it was lie-flat, but at an angle.  The privacy is also increased, in particular for the middle seat passenger, thanks to the cocoon-style side walls.

A minor criticism is that the IFE controller is placed at eye level, which is a bit “in your face” but given that it is wireless, you can easily move it to the side table if it becomes too annoying. 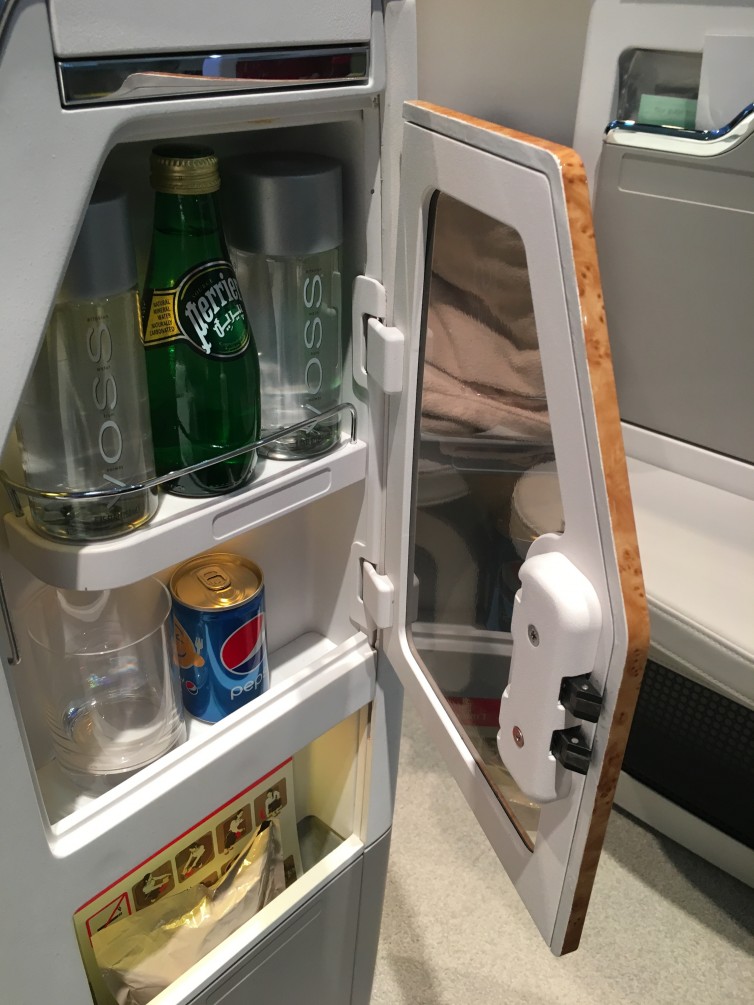 Overall, I think the new product is a significant improvement over the existing 777 business class product. However, it is a bit of a shame that Emirates has no plans at this stage to retrofit it to the existing 777 fleet. This means that there will still be angle-flat seats in business class for a few more years until the current 777 fleet is replaced with the next-generation 777X series. The new product will start to be seen late this year with new build 777-300ERs. 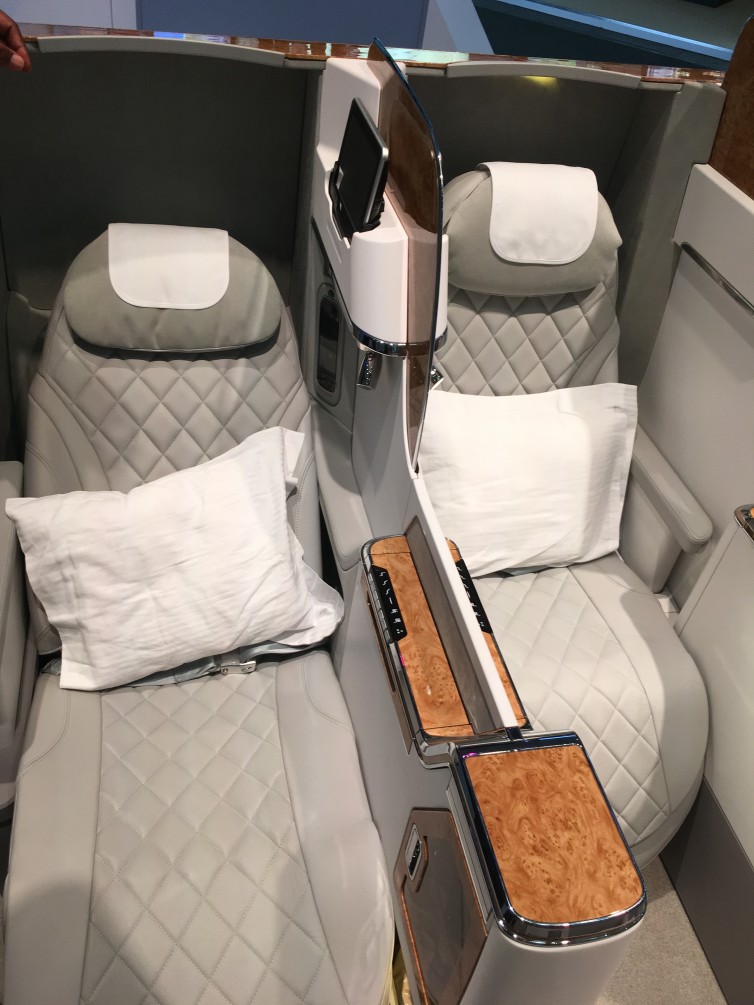 The seats offer increased privacy over the existing product; pity it will not be retrofitted to the current 777 fleet – Photo: Jacob Pfleger | AirlineReporter

Emirates has faced much criticism over this layout, in particular when its immediate competitors in the middle east are offering 1-2-1 layouts with direct aisle access for each seat. In my opinion, however, Emirates has made the right decision by sticking to its original 2-3-2 configuration for the 777 series of aircraft, from both a product choice and consumer perception in the market. 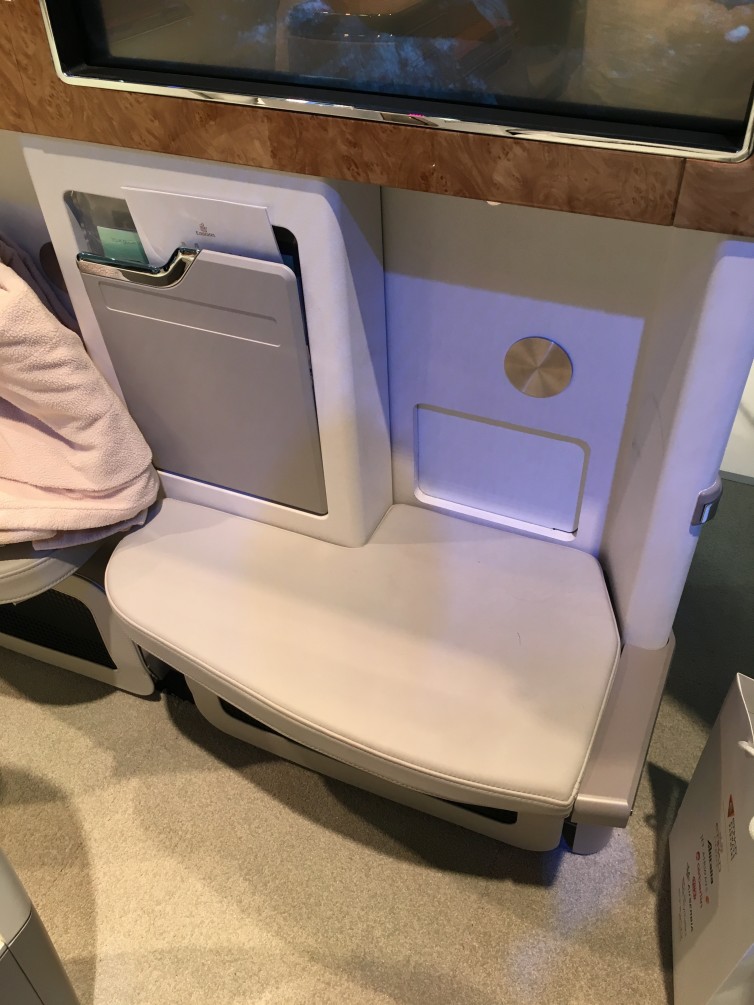 Despite the criticism for the 2-3-2 layout, the seat is surprisingly comfortable and offers a generous amount of legroom over the existing product on the 777 fleet – Photo: Jacob Pfleger | AirlineReporter

First and foremost, it comes down to a commercial decision. In most of its current 777-300ER configurations, there are six rows of business class (assuming it is a three-class aircraft). By changing the configuration to a 2-2-2 layout, that would mean six fewer seats in the business cabin. It might not seem like much, but this amount of premium cabin capacity can make a huge difference to the bottom line.

Now if Emirates were to go one step further, to be on par with its middle east competitors with a 1-2-1 layout, that would mean their business cabin would reduce in capacity by a whopping 18 seats or close to a 50% reduction in premium cabin capacity. Given that Emirates is at present the largest Boeing 777 operator worldwide and the aircraft forms the vast majority of the fleet, it really is not a wise commercial decision to reduce the business cabin capacity by close to 50%. 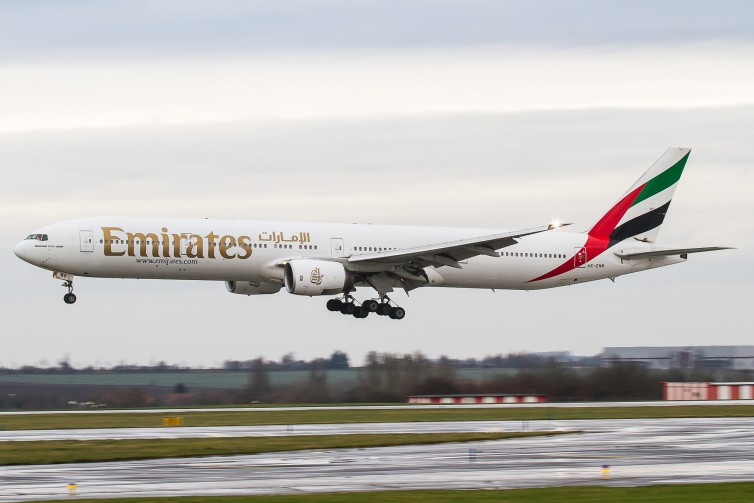 Another point to consider is the airline will be taking more deliveries of the Airbus A380. Many of the existing highly competitive long-haul/ultra long-haul 777 routes will progressively be upgraded to A380 aircraft, where the carrier’s business product really is on par with the other ME3 airlines. In these highly competitive markets, it makes the most sense to provide a competitive business class product with direct aisle access for every seat. This will mean that the new 777 product will likely only be deployed on the long-haul routes without much competition and where Emirates will still deliver the most premium experience when compared to the available alternatives.

The new business seat will also offer a great product upgrade for the carrier’s regional routes into Africa and secondary European/Asian/Middle East cities, where the flight time does not exceed 6-7 hours; it can be best thought of as a “regional” business class offering. All that said — yes, it can be a bit frustrating when you are the one stuck in the middle seat. But it still beats sitting in economy! 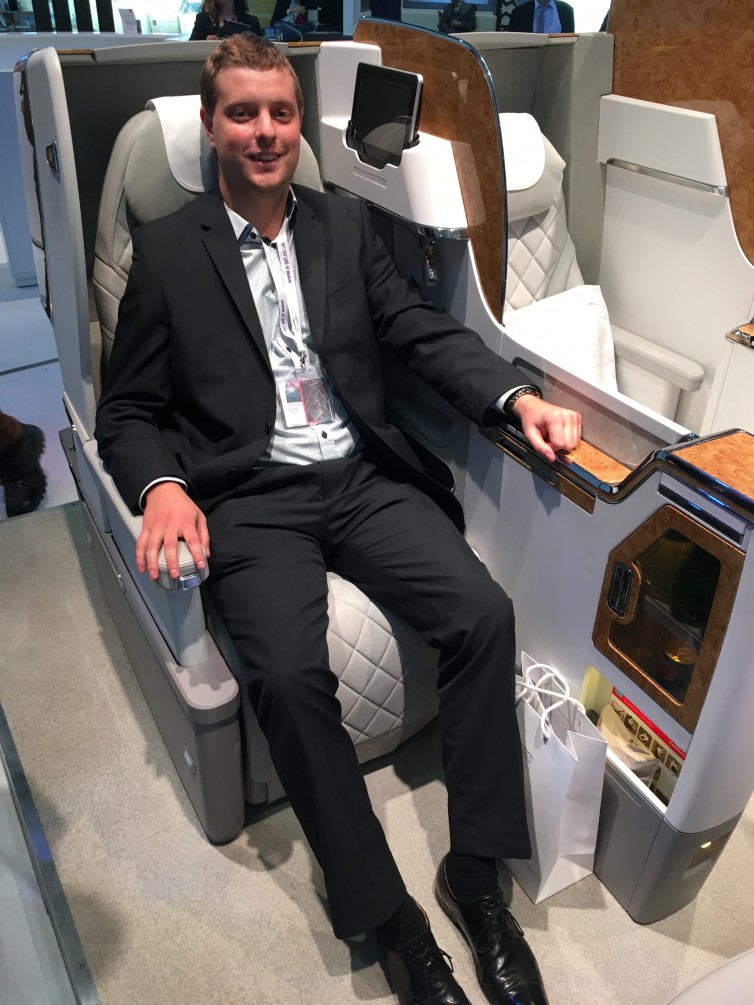 While there has been much criticism over the new seat design, it is a solid product that fits well into Emirates’ commercial planning for the 777 fleet – Photo: Jacob Pfleger | AirlineReporter

I like to think that the initial negative reception by the travel industry of the new product really is unjustified. One has to examine not just the hard product itself, but also the markets where it will be deployed, as well as understanding in detail the airline’s commercial decision for such a layout. After all, reducing your business cabin capacity by nearly half really is not the wisest decision, in particular when you operate into markets where your product is the only truly premium product to be offered and thus the demand for it is steady.

What do you think? Was this the right call or a huge mistake going with the 2-3-2 configuration?

https://www.airlinereporter.com
Opinion: LAX Story – Why the Terminal 4 Connector Matters To You
Pimp Your Airfare: Embrace the Connection
19 Comments

I would not chance getting a middle seat with possibly snoring seat mates on each side!! No thanks.

Me neither, and especially at that price. I’ll find another way to get to New Zealand.

Middle seat in J class?
You gotta be kidding me!

And how do you get up to go to the lavatory if you are in the middle seat and the folks on either side of you are sleeping? Yikes!!

I really enjoyed the article. Great pictures! One point about your math on 2-3-2 vs 1-2-1 though. Although 2-3-2 has nearly double the seats per row, with a 1-2-1 layout you can have more rows per unit of length down the plane, since the seats are diagonally oriented. So I’d guess than going to 1-2-1 from 2-3-2 would be closer to a 15-20% hit on capacity than a 50% decrease. Still a meaningful difference, I suppose.

Cathay Pacific runs a 2-3-2 product. That’s fine. You know why it’s fine? Because those flights are regional! I would probably be okay with the Emirates decision if they weren’t already the reigning monarchs of product inconsistency. More so, if Emirates didn’t send these aircraft on some exceedingly long flights. Usually to airports too stupid to make themselves compliant with the A380, yes. Be that as it may, it feels like Emirates is punishing its customers who lack the ability to use EK’s flagship aircraft. Seriously, no one who wants to fly Emirates is going to go a couple hours down the track when there’s a nonstop flight from their home airport. They’re good, but they’re not that good

It doesn’t make sense that in 2016 an airline would announce a 2-3-2 business class product for release in 2017. I still think this may be an elaborate fake out.

Sorry, I just don’t get this article. You’re making a justification from the point-of-view of an airline – of course it is more economical to cram in as many as possible. It doesn’t make sense from the passenger’s perspective and an interesting article would have argued how.
Big screens are great but pretty distracting if there are two of equal size showing something different in your peripheral vision. I never understood the ‘mini bar’ – who wants warm drinks?
Come on Emirates, be an innovator!

2-2-2 would have been a reasonable compromise. Aren’t half of EK’s US destinations served by 777s?

Precisely, this is not a product I would pay for on a 14 hour flight. If it was against a “recliner” seat on an A320 for a flight under six hours, it’d tip the scales in its favor, but flying to the gulf? They need to consider a product like B/E’s APEX if they want density in this day.

If they at least had opted for the JAL cabin layout…they have kept direct aisle access, but Emirates was just too lazy not too do it. If I was to fly Business, I’d always choose another airline that has a solid Business product. Also don’t forget that EK Business looks ugly with that fake wood…couldn’t they do the same thing as EY and QR and get some standards for looks?

I don’t understand the point of this article. Is it a production of the Emirates Propaganda Department?

I fly long-haul business class frequently, and from a passenger perspective being stuck in the middle of a 2-3-2 configuration for a 12 hour flight from Dubai to Australia is not a fun experience when the ticket costs many thousands of dollars. I will actively avoid an EK flight if the only open seats on the flight are the middle seat.

Not as good as KoreanAir’s new 2-2-2 on the new 777-300ER which offers direct aisle access from window seats, but far better than United’s shamelessly ridiculous 2-4-2, but that’s a whole different story. The minibar is a nice touch though. But at the end of the day, I hate 2-3-2 configs as the middle passenger inevitably ends up disturbing its neighbors whenever accessing the aisle. Would avoid flying if other options are available.

Vile – a step back in quality..No way

This so 2000, middle seat in J , who wants to sit there. I think that in 2016 a middle seat in J would never be considered. Very surprising move from a market leader. Looks to be too much cramped to my taste compared to other products having 1-2-1 config.

Some big advantage to 2-3-2.
*Couples traveling together can finally have a conversation.
*72″ is ALOT of space between rows. Even with people sleeping you should have plenty of space to step over without hassle at all.
*No foot cubby! Lots of business class seats make your feet pay big time for the all aisle access. These seats will keep your feet open and 20″ width versus foot cubbies that even my smaller feet have been crammed into.
*Very few long haul routes will use these. I see the A380 will be doing most the long haul flying with 777s doing long thin routes that wouldn’t be served at all and will have no comepeition
*Seats look pretty luxe!

Rubbish. If Qatar can make money with 1-2-1 so can Emirates. Which is why I will do my utmost to avoid flying J class on the Emirates 777

What a complete rip-off. I think Emirates are a joke for doing 2-3-2 in the 777.
No wonder Emirates are spiralling downhill – against such (VASTLY) superior competition and service. I mean big TVs versus 2-3-2? Families Travelling together on business class?!?
This is my LAST emirates ticket Mr Tim Cook….all good things always come to an end.

you shouldn’t be allowed to write such unbalanced drivel, emirates propaganda for sure.