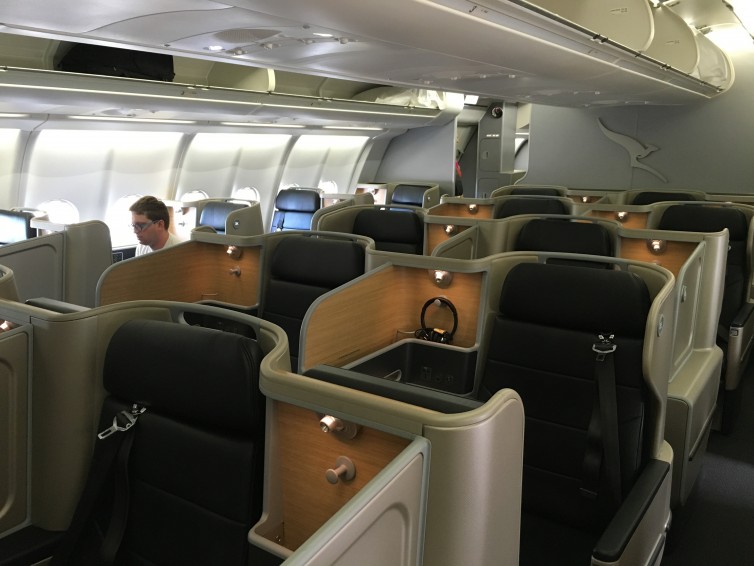 The ever common 1-2-1 layout of business class onboard the Qantas A330-200 ’“ Photo: Jacob Pfleger | AirlineReporter

Check-in for Qantas flights at Sydney Airport is always such a joy for me — I am a huge fan of their next-generation check-in and bag drop system. It really is an industry-leading innovation in terms of self check-in. From printing my boarding pass, tagging my bag, and dropping it off at the automated bag drop, the whole process took no longer than two minutes. And don’t worry, for those of you that are not so tech savvy or prefer human interaction, there is an abundance of manned check-in counters for you to complete the check-in formalities.

Qantas offers a fast-track security line for business class passengers, as well as top-tier frequent flyers. The Qantas business lounge was very quiet on this Sunday morning, as expected. There was a wide variety of breakfast items on offer from eggs and sausages, right through to sweet and savory items, as well as plenty of fruit and healthy dining options. Unfortunately the bar was still closed, but there was a barista on duty to provide a much-needed coffee boost. 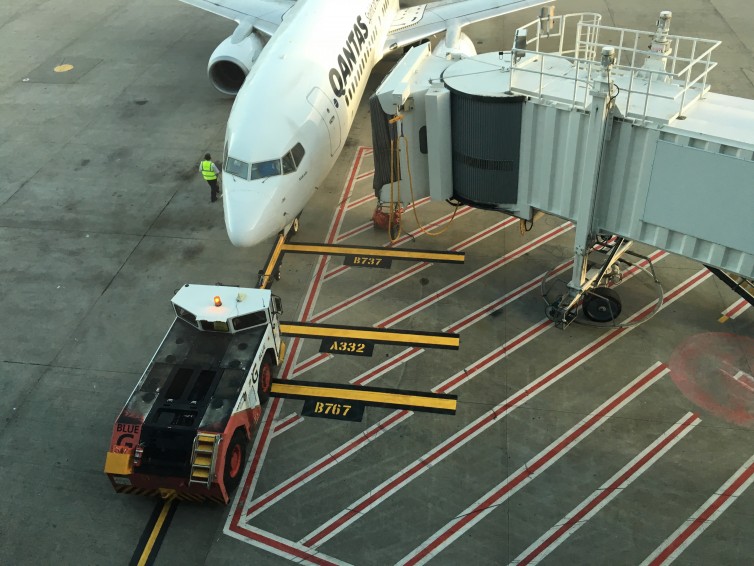 Boarding was on-time and I was surprised to see Qantas using both jet bridges for boarding. However, it was was a nice welcome and added to the premium experience. Qantas has brilliantly captured modern Australian industrial design in not only the layout of the cabin, but also the use of light wood and dark leather finishes. The crew on this flight was very attentive and proactive. No sooner had I settled myself in was I being offered a choice of pre-departure beverages. 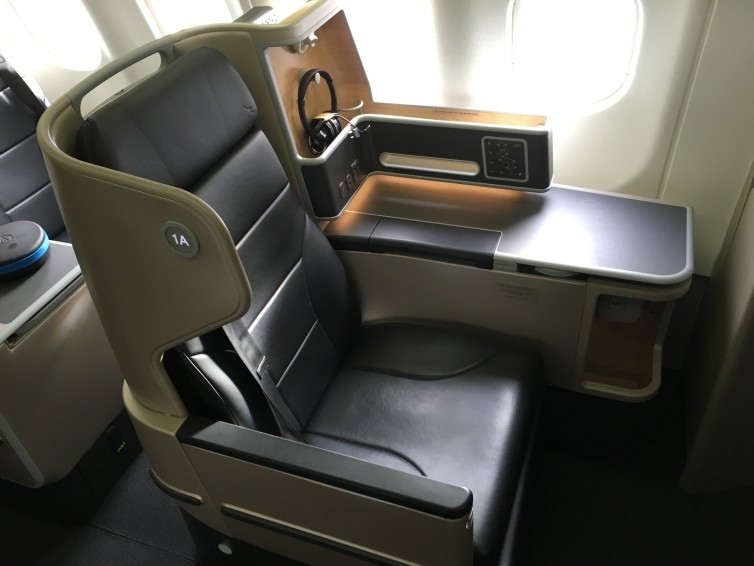 A great seat design and a first for Qantas on its domestic routes – Photo: Jacob Pfleger | AirlineReporter

Unfortunately, one thing I did notice with the pre-departure service is that Qantas has done away with the hot towel service in domestic business class. Furthermore, there are no longer fabric towels stocked in the business class lavatory. There is only one dedicated lav to the whole premium cabin, so it can get a bit busy during the pre-landing rush. These so called “enhancements” really do annoy me. I mean is it worth it to diminish the premium passenger experience for the sake of a minuscule cost benefit to the airline? I think the little things can turn into big impressions. 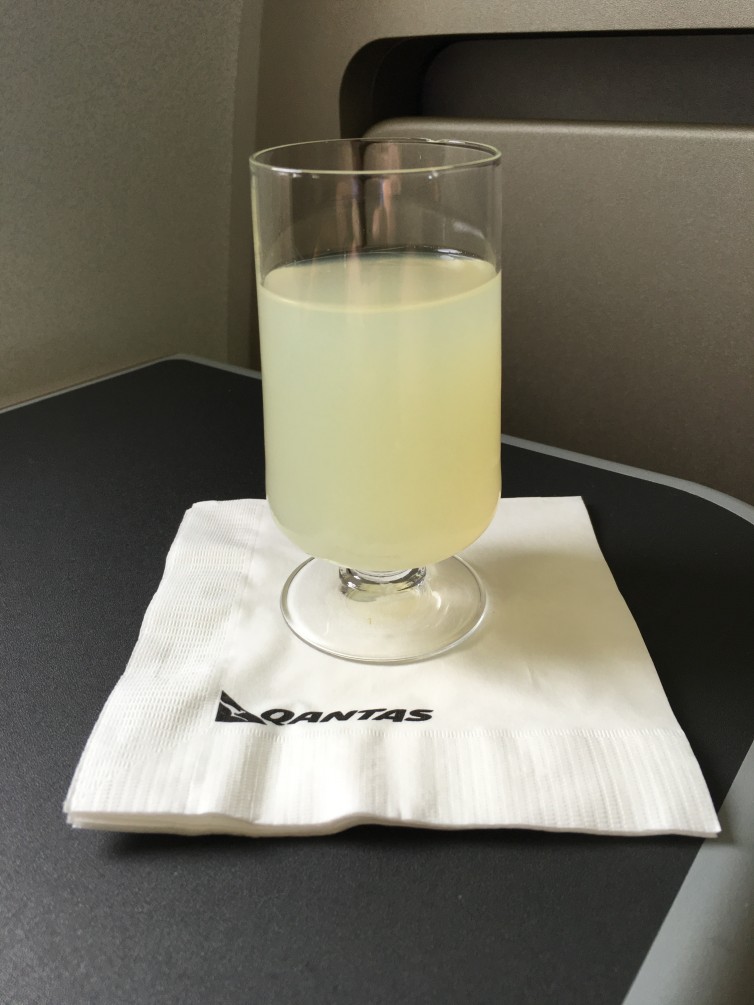 Where is my hot towel? Well, at least I’m lucky the beverage is still served in glass…. Photo: Jacob Pfleger | AirlineReporter

Following our on-time departure, breakfast was served. There were two choices; either muesli or poached eggs with french toast. Given that poached eggs are one of my favorite breakfast items, I was rather excited to try them out on an airline other than Etihad. Unfortunately, the meal did not really live up to my expectations — the eggs were cooked solid, which I suspect was due to overcooking in the aircraft oven. The french toast bread was fairly flavorless as well. The redeeming factors however were the sauted mushrooms and the natural yogurt. 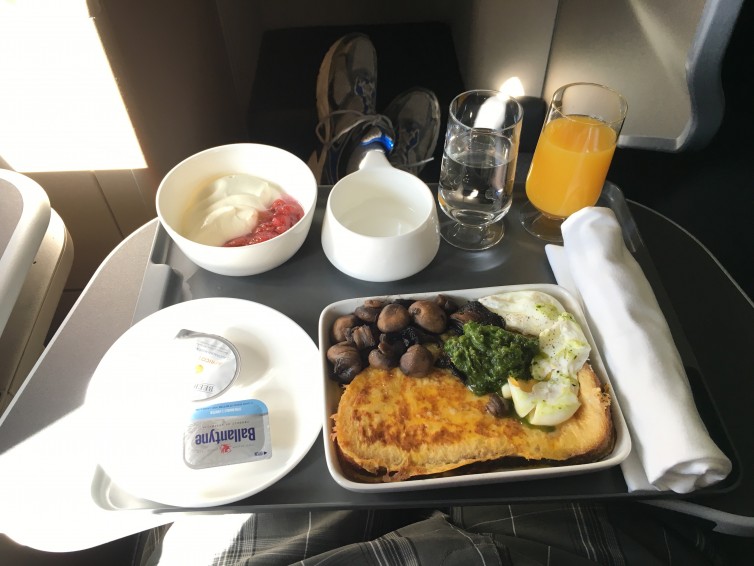 The rather disappointing breakfast, but not all was bad – Photo: Jacob Pfleger | AirlineReporter

Following the mediocre breakfast service, my spirits were lifted a bit when I began exploring the IFE while my seat was in bed mode. While the length and width are sufficient (I’m 5’11”), I am not a huge fan of the fact that when in bed mode, the seat is far too low and it is really impractical to watch the IFE. If the screen tilted, it could work, but it does not. Despite this, the seat is ideal for its primary purpose of sleeping. That said, it would be good if Qantas were to provide a duvet/mattress on longer flights, as the leather can get a bit uncomfortable.

In addition to the lie-flat mode, there are many other comfortable sitting and lounging positions available. There is ample storage at the seat, with plenty of little nooks for various items such as reading glasses, books, tablets, etc. For your carry-on luggage, the overhead lockers provide plenty of space, and thankfully Qantas have kept them in place above the center seats. 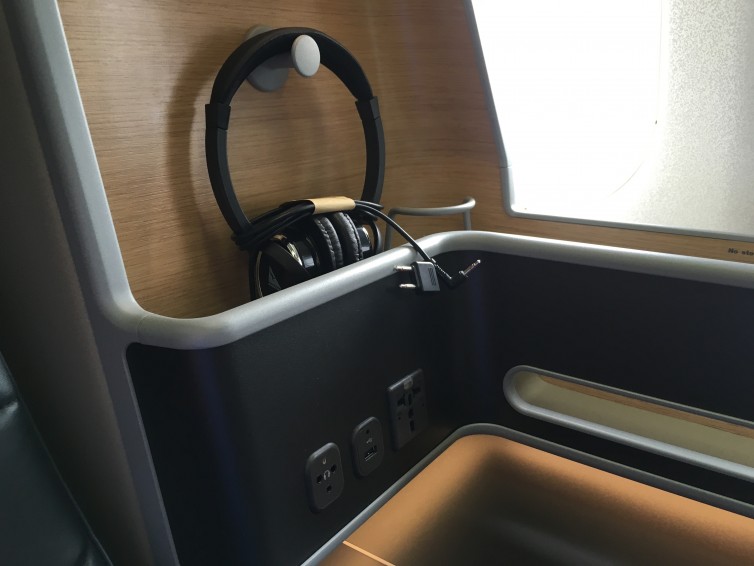 There is plenty of storage as well as in-seat power and a USB port – Photo: Jacob Pfleger | AirlineReporter

In terms of IFE, there is the classic in-seat touch-screen, (Qantas use the Panasonic EX3 system), which is a great system in terms of responsiveness. There was also a generous selection of movies as well as TV shows, documentaries, and reality shows. Really, the shorter options were good for the short domestic flights. 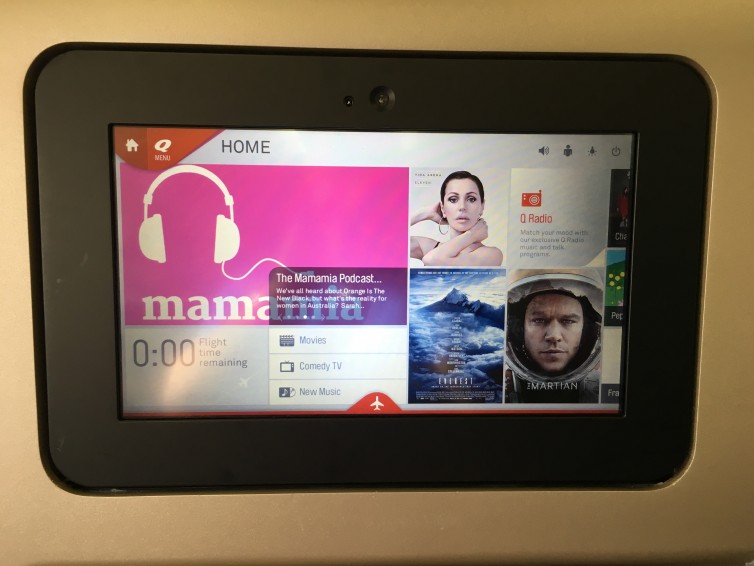 Qantas use the Panasonic EX3 system with a wide selection of movies and short features – Photo: Jacob Pfleger | AirlineReporter

In addition to the in-seat IFE, Qantas has also recently introduced Q-Streaming on the A330 and select 737 aircraft. This allows passengers to view the IFE on their personal devices via WiFi streaming — just remember to download the app before the doors close. 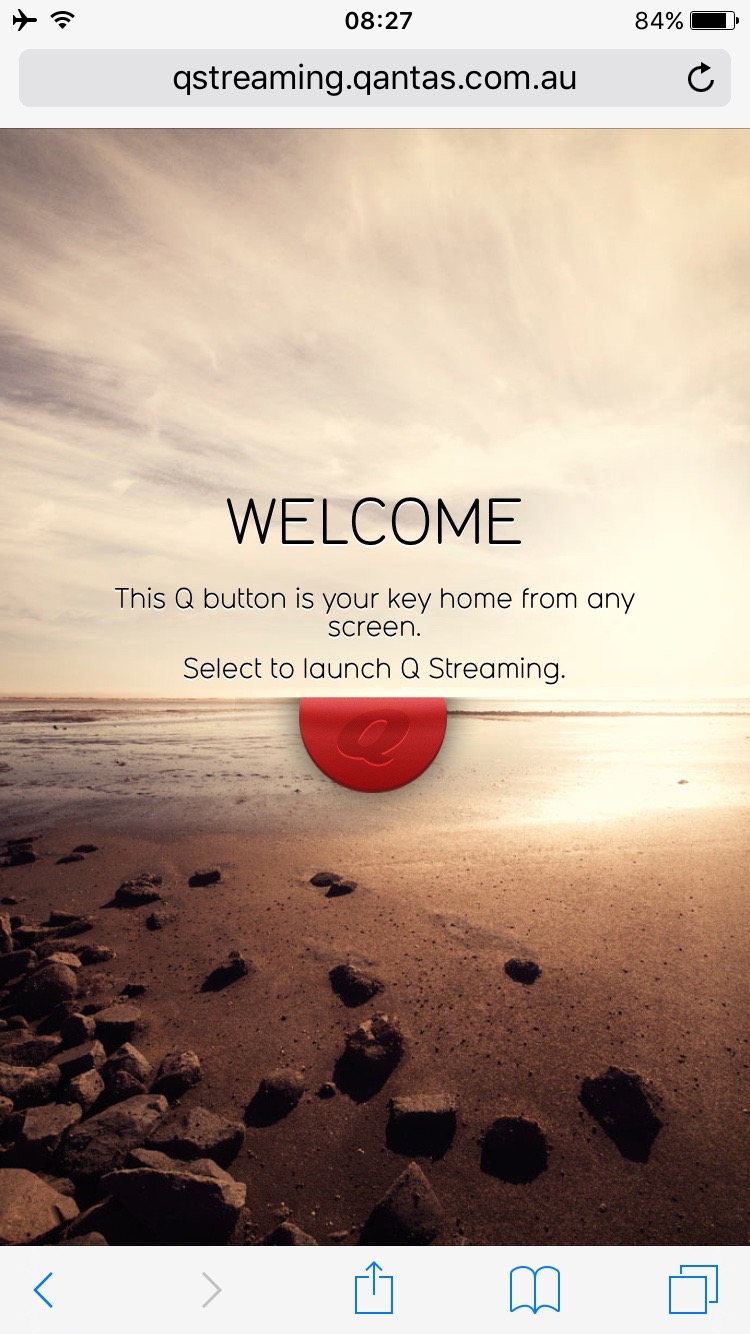 Our arrival into Melbourne was on-time and once again two bridges were used. The only minor hiccup with the arrival was that the priority bags were not delivered first, but these things do happen and I am on holidays after all, so not in any particular rush.

Overall, Qantas has vastly improved their hard product on the Australian domestic market with the business suite. Their soft product has been subject to some recent “enhancements” which have really showcased the unfortunate and ever-increasing trend of airlines sacrificing premium experience for the sake of cost-cutting practices.  Thankfully, the ground experience is still relatively premium and Qantas does offer one of the best ground experiences for premium travelers on domestic flights anywhere in the world.

https://www.airlinereporter.com
The Central Air Force Museum of the V.V.S.: It’s in Danger
Interview With the Captain of the First 727’s Last Flight
11 Comments

We recently flew on American’s 330 from BCN to PHL. The IFE screen was a joke. One has to wonder. What were they thinking not having the screen tilt?? Do they ever put a human in a seat before production and see if the system will work? I’m 6ft. Same problem you encountered. Not a problem on the 77 we flew from MIA to BCN. Reminds me of website engineers. Do they ever test their website with folks who are not familiar with the company? I would gladly volunteer!!! Bill Helbig, retired AA 767 captain

The wonderfully comfortable seat certainly appears to be not accessible to a person in a wheelchair. The arm will not swing up or away to allow a person to transfer from the aisle into the seat. Is the Premium Business Class Lav also non-accessible for use by a non-walking passenger?

There are actually select seats in the business cabin which do offer disability access.

You mention that the seats are allowed to be in the recline mode for takeoff and landing. How do they get away with this? Is that more of an airline policy up to each airline to decide if they want to allow it?

More importantly I fly in what makes me feel comfortable and in the Australian summer there is no way you will ever find me flying in a suit!!

I could be mistaken, but those shoes do look past their use-by date. Your criticisms of Qantas food, seat comfort, IFE ergonomics, and toilet deficiencies would sound more authoritative coming from someone dressed to match the superior area you were sitting in. Check out Rieker next time you are in a shoe store – they make stylish shoes ideal for both warmer climates and business class 🙂

Thanks for your concerns about my shoes but they are just fine. There was no way I was going to wear my R.M Williams boots on a 40+ celsius day in Melbourne and thongs would be even worse to wear in business class not to mention they go against the Qantas dress-code for entry to their business lounges……

Also I do not see why I should be forced to wear formal attire when flying business class it is after all Australia still a mostly free country… When I fly I like to wear what makes me feel comfortable and I really can’t give a stuff as to what the general traveling public think, if I have enough money to pay for a business class ticket I will sure as hell wear whatever the hell I feel like regardless of other peoples opinions…..

Concern about passenger attire in First/Business class reveals here-to-fore unnoticed aspects about class warfare. It’s spilling over to the airline industry. These days, the uberwealthy fly on corporate and private charter jets (check out Blue Star Jets). You don’t see CEO’s flying commercial. Do you think that airline executives fly on their company’s own aircraft? Business class, with all the electronic entertainment video stuff is for anyone who is willing to pay (or is clever enough to find a way to upgrade) in order to occasionally escape the crowded squalor of “economy class”. I’ve flown in BA’s Club Class on a couple of occasions from Seattle to London. I enjoyed the lie-flat seat, but I only wear old comfortable clothes and my shoes are at least 10 years old.

Have to say this is a first Walter in our over 7.5 years in existence — so congrats!? 🙂

I have the opportunity to fly in premium products quite a bit and I am just happy with people are wearing any shoes and I find some of the most wealthy people wear the worst shoes (and clothes) when flying.

David, My wife and I dress nicely when boarding first/business, but after things are settled as we climb up toward cruise altitude, a quick trip to the lav, and the sweats are now the fashion for the flight (nice sweats of course)!
During descent, same thing in reverse. Thankfully, gone are the days when employees at American had to wear suits/sportcoat and tie and women a dress and no open toe shoes when flying 1st class! Oh,…….whilst at the same time employees were to keep a “low profile”. Of course everyone on the airplane would notice all these really dressed up people flying standby and boarding at the last minute!! Its amazing how little thought goes into a plan in corporate America at times. Of course flying standby these days in first or business is a thing of the past, so we only fly using Advantage miles, which is every 2 -3 years, standby (domestic only) when we don’t have to be somewhere on an exact date, and even then its dicey. Bill