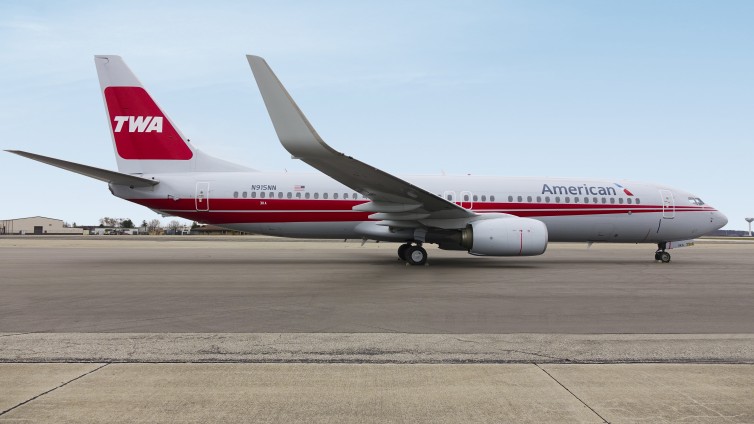 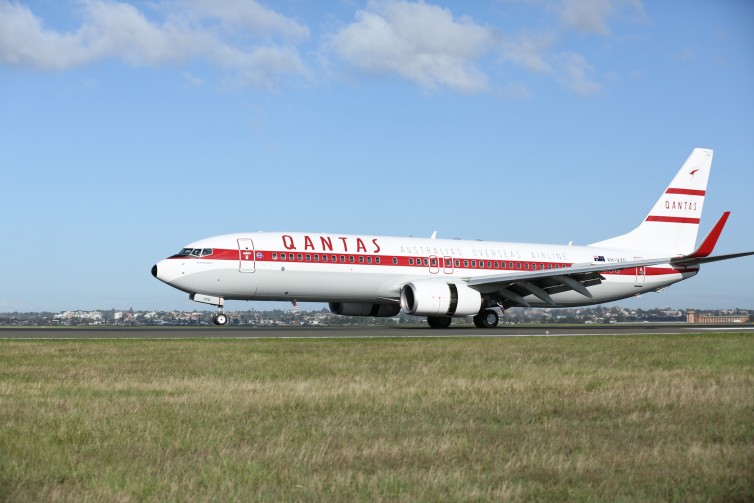 The Retro Roo II livery on a 737 – Photo: Qantas Airlines

It is just fun saying “Retro Roo II.” Try it… I will wait…

Qantas revealed this retro livery to celebrate their 95th anniversary, and it is one of the classics. 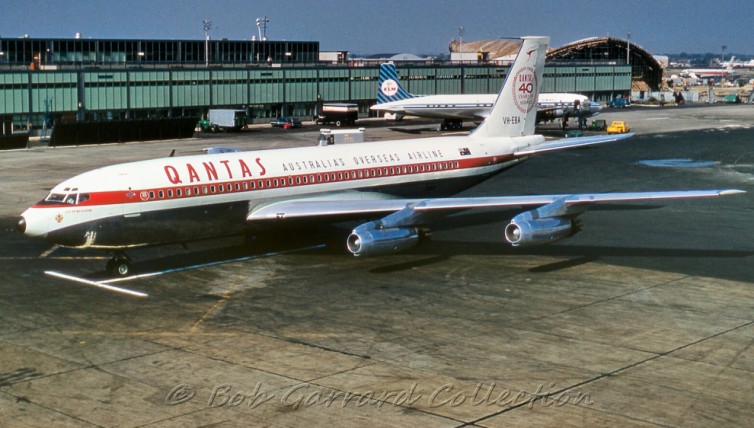 The livery seen on a Boeing 707 (VH-EBA Qantas “City of Melbourne”) taken in 1960, with special 40th anniversary logo on the tail – Photo: Bob Garrard

Qantas was the first airline outside the United States to operate the 707, so at the time, the combination was a pretty big deal to the airline and to Australia.

The big difference is the lack of the polished metal belly, but still is quite true to the original design. 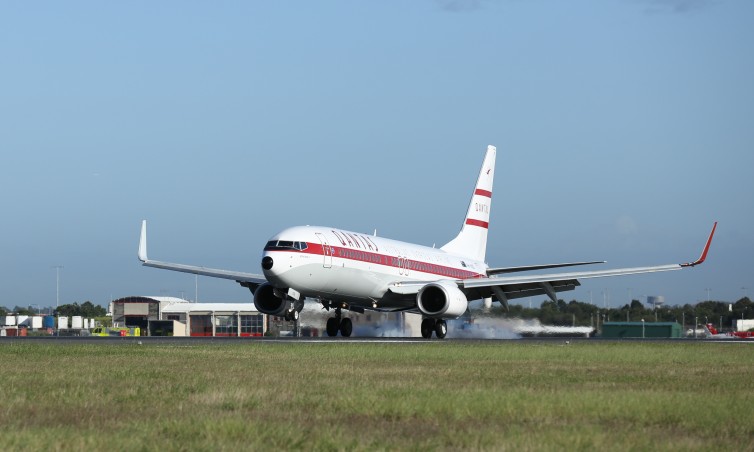 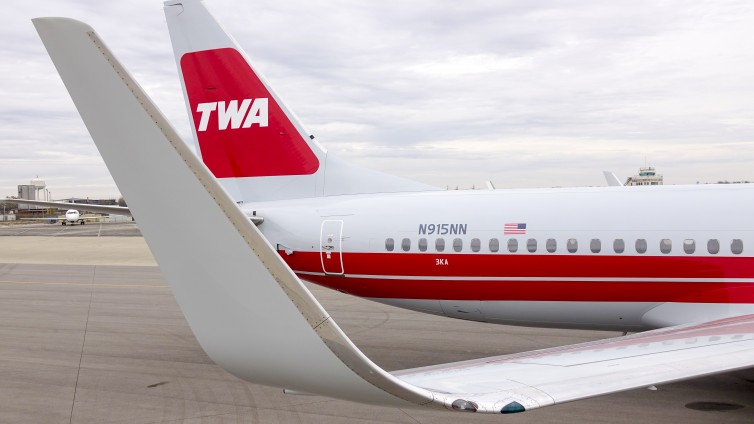 American Airlines has taken over the tradition of US Airways in featuring “heritage liveries” (that is the wording they use instead of “retro livery”). They have been great eye candy for AvGeeks, and this week, AA has shown off probably the most iconic livery, that of Trans World Airlines (TWA).

American titles on the 737

Close up of the TWA tail 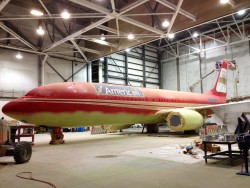 In the paint booth 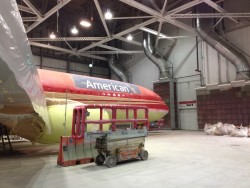 Although the Boeing 707 might be the aircraft that many visualize with this livery, I have always thought of the L-1011. I think the hardest part, visually, for American is they have the retro liveries, but still keep their “American” titles. 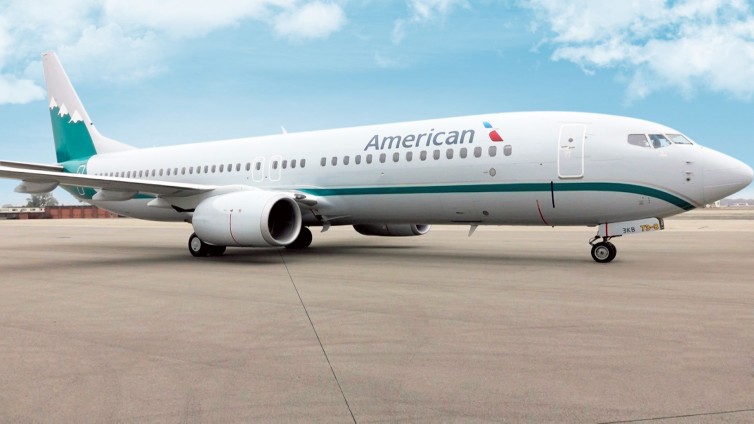 The Reno Air heritage livery wasn’t revealed this week (earlier in the month), but I still wanted to show it off.  This livery has a special place in my heart!

My dad used to live outside of Reno and I would often fly from Seattle to Reno on the airline. All those flights, and being at the airport, helped my passion for airlines to grow.

As mentioned earlier, I think this livery looks a bit weird, since the “RENO Air” titles were a big part of the design, but now has the smaller American titles. 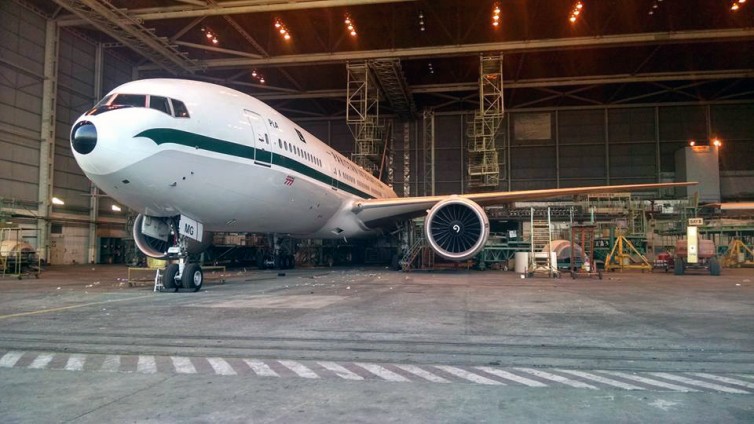 Pakistan International also recently showed off a Boeing 777-200ER (AP-BMG) with a classic livery. The design was flown by the airline during the 1960s.

Love for the Retro Liveries

I always love seeing when an airline shows off a retro livery, either to provide a little special marketing, remember their heritage, or to bring back fond memories. There are many other retro liveries out there and hopefully more to come (Editor’s Note: still eagerly awaiting a United 787 or 777-300ER in Saul Bass tulip!).

Which retro livery (either these or others) is your favorite?

Nice article on Retros. Am also eagerly awaiting the roll out (fly by) of the United Boeing 727-100 being restored in the original UAL livery.

Thanks for putting this great article together

Take you down memory lane. Those were the days. Thank you for a awesome article. So by the way, what about the old DC 4’s, Boeing 707’s and DC 8’s. Just a suggestion. With you re ability David I am sure we can look forward to their write up’s making us long for those days with those kind of aircraft.

It is always good to remember the “true symbols” stamped on the fuselage of aircraft flights airline that has survived, overcome crises and continue flying in the outside world.
But what most caught my attention, it was not the paintings on the aircraft. Were the conservation and cleanup conditions in patios and lanes where these pictures were taken.
Really an evolution happened in this regard.

David
Waiting to see that beautiful TWA color in the sky again, it meant so much to so many who still remember flying TWA around the world.
Thanks,
E.M. DUENES

A little time has elapsed since you posted here but I just ran across it, looking for airline material for one of my clients.

Who will do National Airlines ?

And my wife reminds me–Braniff! And not just the end of the plain plane (viva Mary Wells!) but Calder’s Flying Colors! Wouldn’t it be great to see something like that again.

Wow, what a great trip to see TWA looking brand new and beautiful.

What about a National Airlines livery ?

Nice work David! I have been painting airliners now for over 25 years at locations in Santa Barbara, Ca.,
Lake City, Fl., Greensboro, N.C., Appleton, Wi. and Mirana, Az. seen a few things go wrong like; Southwest lettering on the tail on the right side the “S” was at the bottom of the fin just like on the left, it should have been at the top (since we read from left to right) Alaska 737 when the green stripe was modified to go strait back as apposed to curve and go up the tail the rudder is painted off the airplane since it has to be balanced when dry, the template of the Eskimo was moved aft, (should have been left at same location since the green area on the tail is now blue) so when the plane was all done and de-masked up went the rudder with part of the mouth, nose, and an added eyeball (we already had two on the fix part of the vertical) FYI.

Not positive who owns the trademarks for National Airlines, they were purchased by Pan American World Airways who then went bankrupt themselves. Delta Airlines bought some of the routes from Pan Am and a portion of the business. Later on Eclipse Holdings purchased Pan Am’s trademarks and I will assume that National Airlines was included with that purchase. If anyone wants to buy that trademark, they could paint their plane.

I myself want to see a Western Airlines jet flying around, either classic swizzle stick or Bud Light will do. However, Delta Air Lines owns the Western Airlines trademarks and Delta is not into doing retro jets.