They were able to use this opportunity to celebrate the 70th anniversary of the kangaroo being used as their logo and this month is also their 94th birthday. All great things, but I think overall there were two things that really made this event work: a shiny disco ball and John Travolta. 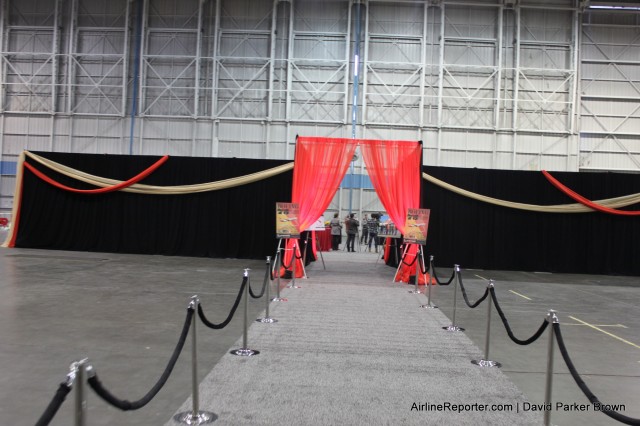 The VIP area inside the hangar

The event was set up at the 737 Delivery Center at Boeing Field (BFI). Inside the closed hangar was a VIP area for airline employees, Boeing staff, and media to gather to talk about the airline and the aircraft. 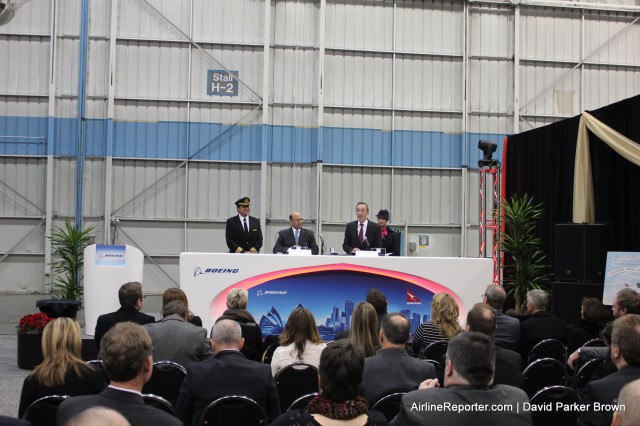 ’œFor 70 years our logo has been a symbol of aviation innovation, but also a reminder that home is never far away,’ Group Executive for Brand, Marketing, and Corporate Affairs, Olivia Wirth said. ’œQantas holds a special place in the Australian psyche, and we know for many of our customers this livery will inspire a fond trip down memory lane. It’s a bit of a time warp having a 1970s livery on one of our brand new B737 aircraft but it’s the perfect way to highlight the years of experience behind the contemporary airline Qantas is today.” 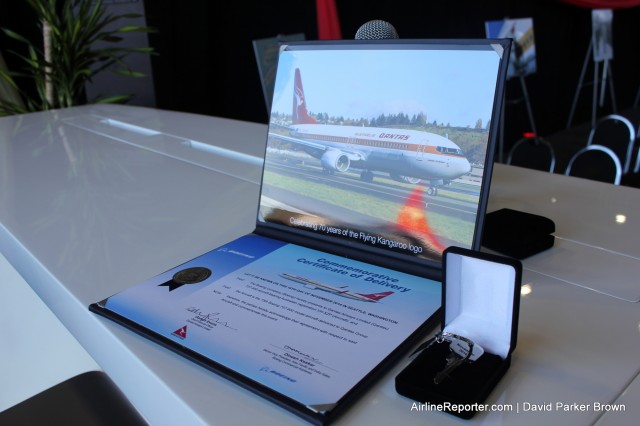 After the executives spoke, and gave over the ceremonial keys, the place started to get rocking — literally. 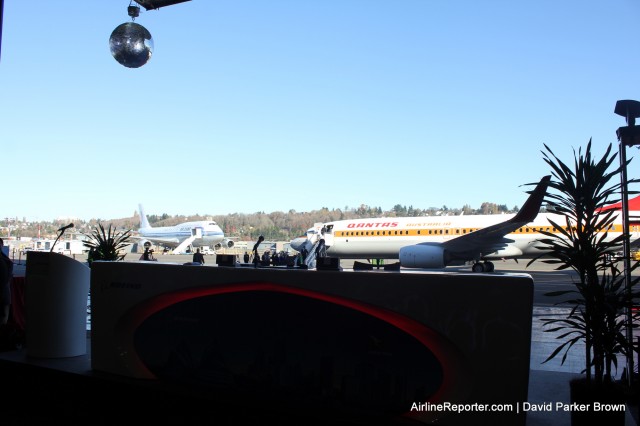 Loud music started playing (Rocketman followed by Fly Like an Eagle) and the disco ball started turning (Boeing is pretty sure this is the first time a disco ball has been used for a delivery event). It felt like a party.

BONUS: Flying a Dream: Qantas First Class on an Airbus A380

Slowly the hangar doors started to open up and the 737-800, with retro livery, was revealed. It was exciting enough as it was, but Qantas had another surprise — a special guest inside the aircraft. 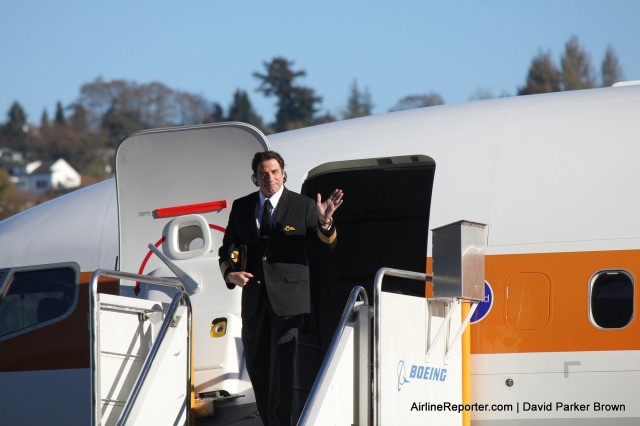 John Travolta coming out of the Qantas 737

Out comes John Travolta, who is not only a huge fan of aviation (I would probably think he is an AvGeek), but also an unofficial spokesperson for Qantas. He owns a Boeing 707 painted in retro livery that he uses as his private jet. Plus he has been trained, by Qantas, to fly the Boeing 747-400.

I have to say that it was quite a surprise. As he walked into the hangar with disco ball going, I think everyone was reminded of Saturday Night Fever and Travolta even commented if he should start dancing or not. Although he did not dance, he had some positive things to say about the airline. 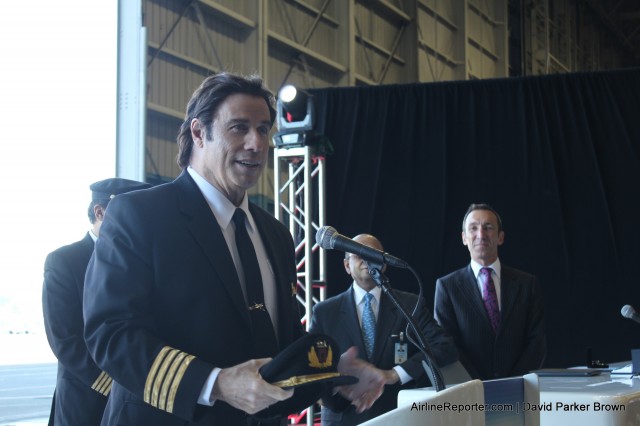 John Travolta expressing his thoughts to the audience

’œIt’s great to see a piece of Qantas history flying in the sky today,’ said Travolta. ’œI have enjoyed many wonderful experiences with Qantas over the years, from getting my 747 wings to having my own 707 painted in the original 1960s Qantas livery. This is a great celebration of the brand’s heritage and incredible reputation over the years. I feel a great sense of pride just looking at this aircraft here today. Australia is lucky to have an airline like Qantas as its national carrier.” 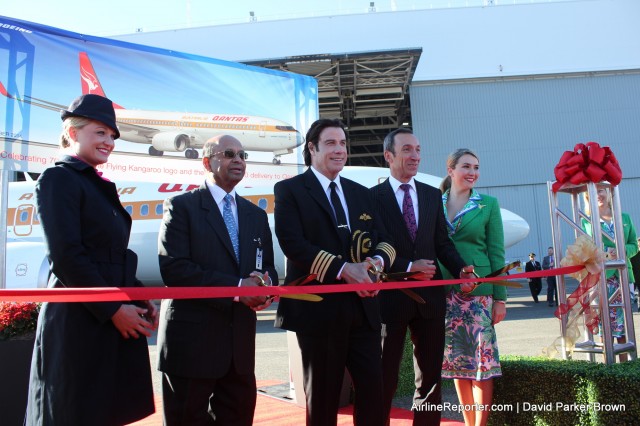 The ceremonial ribbon cutting for the 737

After Travolta spoke, we were back out next to the 737 to complete the ceremonial ribbon cutting. It went off without a hitch and then we had access to take photos around the aircraft. 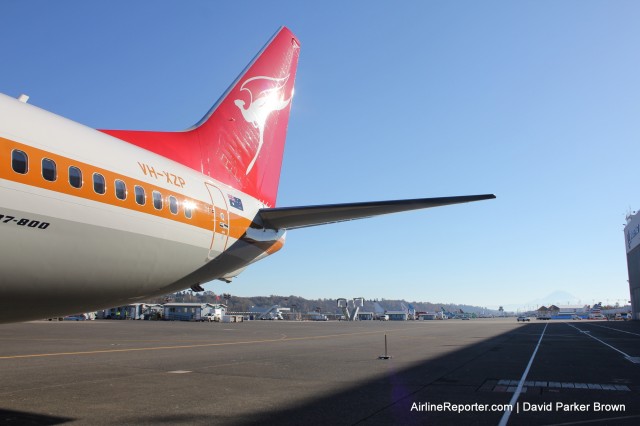 Boeing Field with Mount Rainier in the background

It was quite cold outside, but the airline adrenaline kept me warm. The lighting wasn’t great, but at least we had some sun and clear skies. 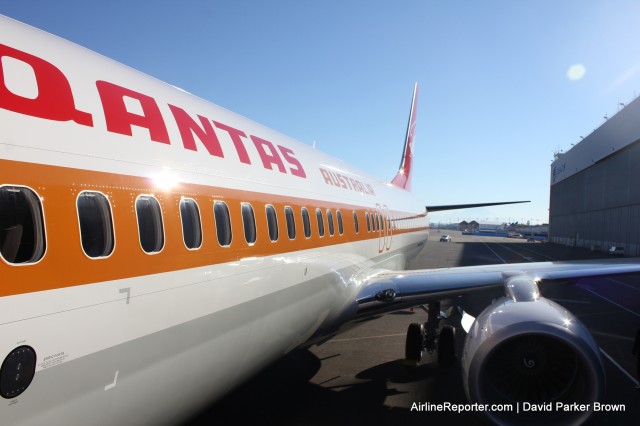 The retro livery is quite striking from many different angles

It is always special for me to board a brand new aircraft. It definitely has a unique new aircraft smell (similar to a car). Unfortunately for this event, the flight deck was closed off, but we were able to access the rest of the plane. 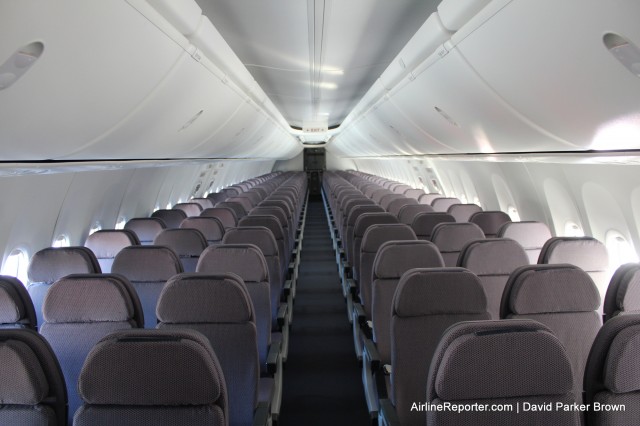 The economy class cabin of the Qantas 737

The cabin had no power, so the Boeing Sky interior looked a bit drab. I always have mixed feelings going into a totally empty aircraft like this. Part of me feels excited for the potential that the plane has and part of me feels a bit sad that it is so empty and lonely and not being used. 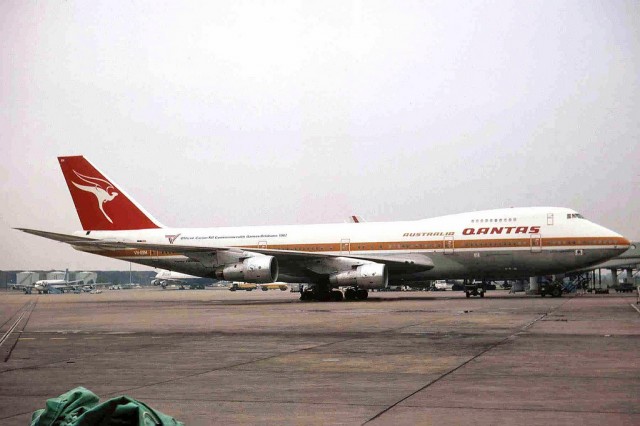 This morning at about 8am local time, the 737 took off bound for Sydney where it will be welcomed by Qantas staff and I am sure a few AvGeeks.

On November 20th it will go in to standard service and be one of many 737s flying around Australia. This is the 75th and final (for now, at least) 737 for the airline.

Although I was skeptical that a 737 could be made into an event, I surely think that Boeing and Qantas did a great job and I was happy to be a part of the historical event.

Great story, and great photos! Love the retro feel for this event.

Hey fellow geeks, can anyone CONFIRM if Sweathog Vinny Barbarino retired his 707 V-Jet? I recall seeing a report, a few months ago, that he DID retire it; afterwards buying a smaller ” ride “.

No NEW photos of N707JT have been posted on airliners.net for several years. I checked … yesterday.

I saw the plane here at MIA back in February of this year during the Miami Beach Food and Wine Festival. He was still flying it at this time.

Wow, not a syllable about James Strong!
I was told the plane was dedicated to him.

Did it fly Seattle-Sydney direct?
(No I think but where did it stop ? Honolulu? Nadi?)