Over the years, I have had many people email me, tag me, and in other ways share with me videos of the Miniatur Wunderland airport, which is located in Hamburg, Germany. I enjoyed watching each one and was quite impressed with the videos.  That said, no words, no video, no photos, not even this story can come close to convey just how freak’n awesome this place is!

I was set to arrive in Hamburg at about 11:00am local time and didn’t have any media events planned until the next morning. That almost never happens — most media trips are packed full of (mostly) good stuff. I always appreciate having some of my own time to explore the area — and Miniatur Wunderland was #1 on my list. I asked Jason Rabinowitz to tag along, who was also scheduled to arrive somewhat early, and we penciled in to head to downtown. He stated that he had been before, but he was totally down to going again — score! 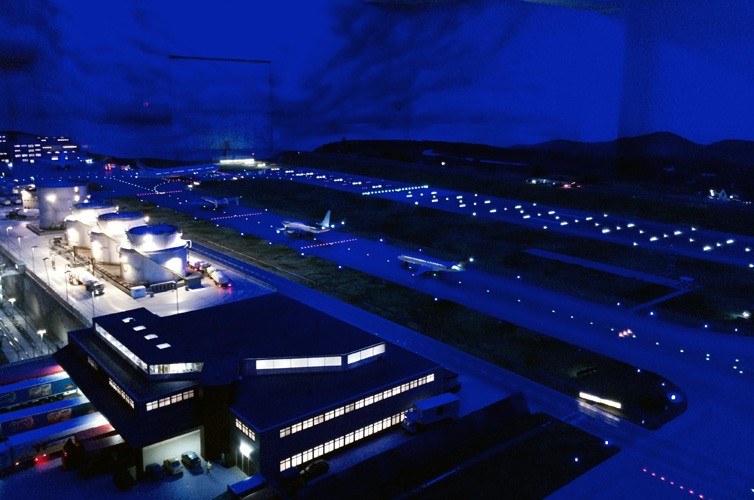 The place changed from day to night and back — quite impressive – Photo: David Parker Brown | AirlineReporter

The Wunderland Airport (also called Knuffingen Airport) has a striking resemblance to Hamburg Airport and is nothing short of amazing. The airport (which I am going to give the airport code WUN for this story — sorry Wiluna Airport) started construction in 2008 and was finished in 2011. It flies about 40 different aircraft, “from Cessna to Airbus A380,” but I also caught a rather large bumblebee going through as well (like the insect — the size of a plane). It can handle about 180 flights per day (bumblebees and all). 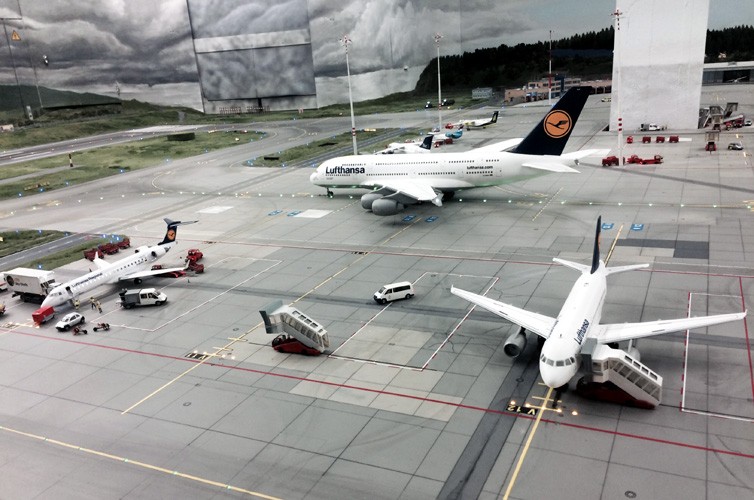 A Lufthansa Airbus A380 taxis for take off – Photo: David Parker Brown | AirlineReporter

When seeing the videos, I just thought it was some track system where the planes are attached to metal poles and driven around on a set course, reset, and do it all over again. Not even close. When I first arrived I saw an Air Berlin Airbus A330 in a hangar. Then the lights started coming on it and taxied out — cool. I saw a car come up to it figured, it would hang out for a while, then the plane would back up into the hangar and restart. Not only did the plane keep going, but it ended up taking off, as it started to turn to night at the airport — damn. 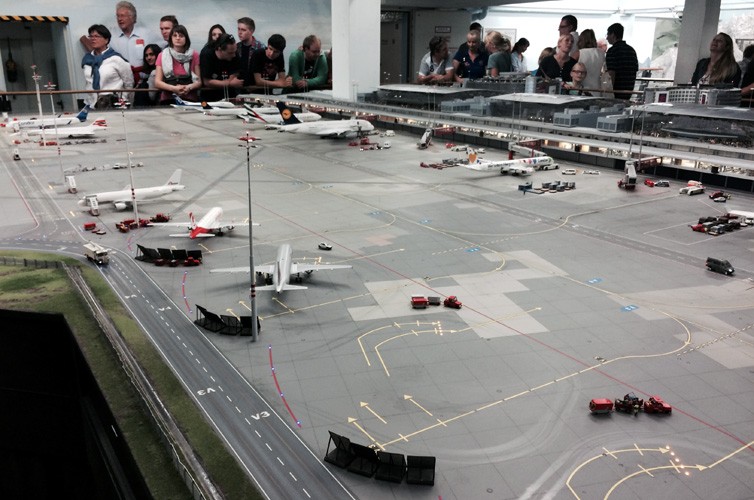 The system is extremely dynamic and the only part that has the metal poles is when a plane is taking off or coming in for a landing. As they put it, the vehicles are, “equipped with sensors, which transmit all data via infrared signals. Thus, it is possible to simulate a more dynamic movement of any vehicle, and lights, turn signals, as well as speed levels can be switched and altered while driving. Furthermore, infrared technology enables a more precise position analysis. Thus, the vehicles can drive with a shorter safety distance to other vehicles in traffic.” 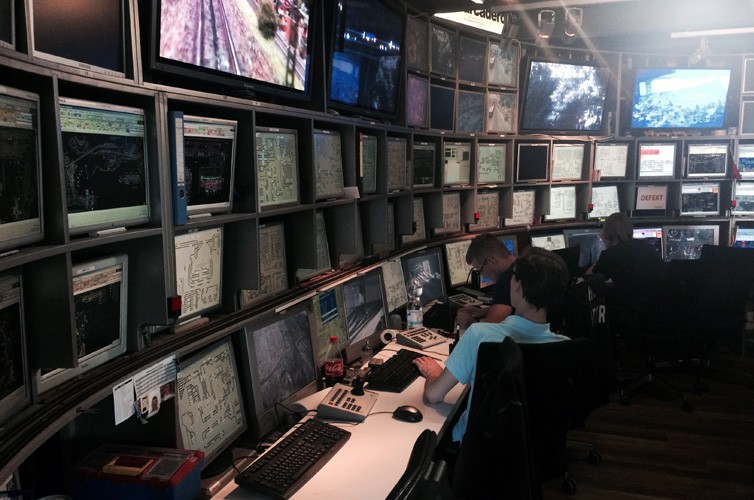 In simple terms, this is no short of an amazing ballet, where everything needs to be what it is supposed to be doing. As I watched all the complexities, I thought about how the timing had to be almost perfect for it to function properly. I started to see the parallels to a real airport — and how if things do not go right, stuff starts going wrong. Unlike a real airport, when stuff goes bad at WUN, a big giant (an employee) is able to go and reset things, either from their computer, or by walking on top of the platform. 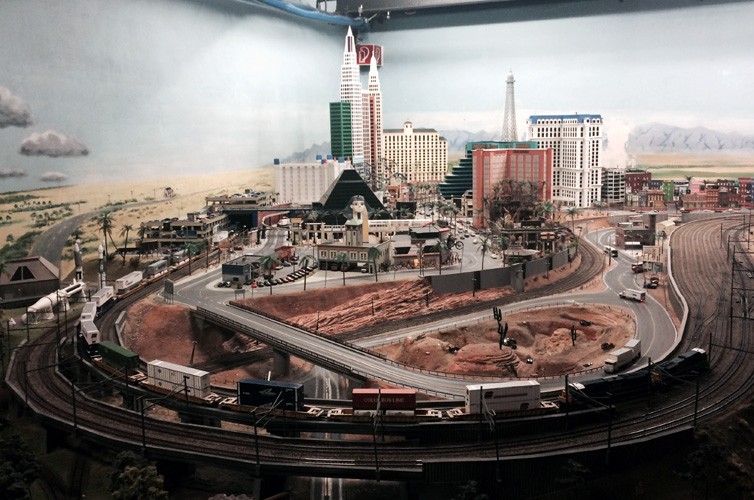 The airport is just one of the many different, impressive things to see while there. Is it worth going to the Miniatur Wunderland? Absolutely. Even if you are not an AvGeek, there are PLENTY of things to see that should interest you! No question, this is worth the time and money to view. But this place is popular — VERY popular. Even on our mid-day, weekday trip, we had to wait 45 minutes to get in. To cut down on your wait, you can either make reservations or check out their busy times. If you do end up waiting, they have a cafe where you can sit, eat, play games, and wait. Just make sure that once you get in, you leave yourself with enough time and patience!

https://www.airlinereporter.com
Blue Collar on a White Shirt
American, Delta End a Partnership You Never Knew They Had – Why Does it Matter to You?
8 Comments

My non-AVGeek wife and I went here last week. The video is amazing, but being there in person is mindblowing. The level of intricacy and complexity left our jaws dropped our entire visit, enough so that we’d want to come back to Hamburg just to visit the airport again and spend hours looking at each minute detail!

Yes! Been there and seen/done that in 2013. The space is magical for kids, old kids and Geeks alike. I spent a half-day and could have stayed much longer. Great post! -C.

We weren’t able to stay long and spent 90% of the time at the airport. Would love to go back (working on it) to spend more time and not only see the rest, but also to check out all the fun easter eggs:

Thanks David for pointing that out (and taking the time to count them all) — fixed!

There was one aeroplane of particular interest: Concorde. You can see Concorde in the upper left corner of photo of main terminal and at 1 minute mark in the video.

We watched it rushing down the runway and taking off into the ‘sky’ while its glorious engine sound roared and rumbled during the take-off. That sound brought the memory of watching a real Concorde taking off at Dallas/Fort Worth International Airport in 1979 when I was 12.

I have to say that I was quite giddy when I saw the Concorde there, “is that a Concorde, that’s &#*( awesome.” Then I realized that there were kids around me, but I don’t think that they spoke English :).

Kyle Bradshaw is the senior entrance-end developer at Digitas, 6
and he classifies himself as solely an internet developer.