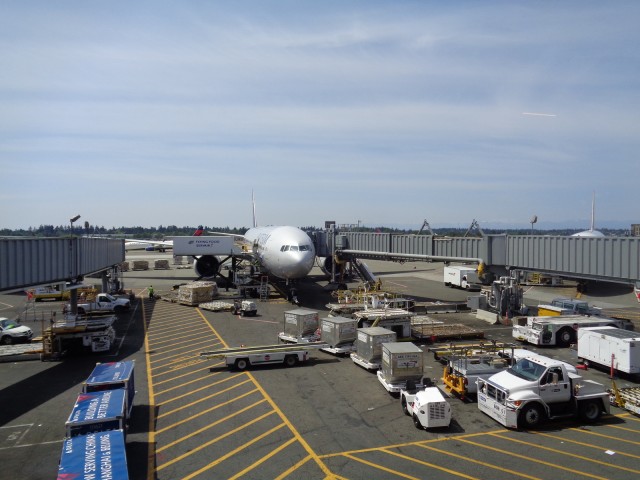 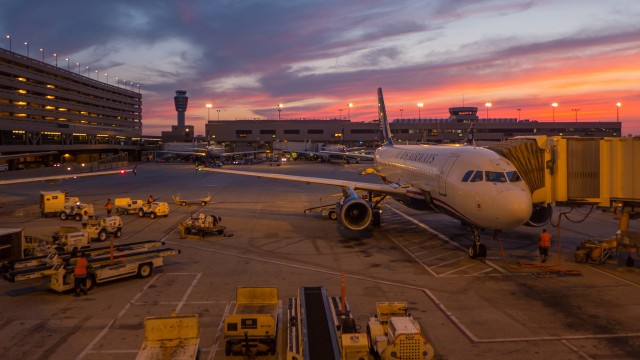 At the end of the night, all the equipment is packed up and put to bed – Photo: Flickr CC | Ed Suominen

Working on the ramp isn’t easy, andÂ can be quite dramatic. Passengers either look out from the terminal or airplane window and think that all that the rampersÂ do is throw a few bags around. Â Well, that is far from the truth. Sure, there is plenty of down time, even in big hub stations, but the work that is done can be quite demanding.

One of the myths is that rampers make okay money. Well, that depends. Many ramp agents are non-union and work long hours for what can often be minimum wage. Â Think that there is extra pay for working nights or weekendsâ€¦ hah!

The only time you get extra is when it is overtime, and luckily, due to lack of people, there is ALWAYS plenty of overtime to go around. 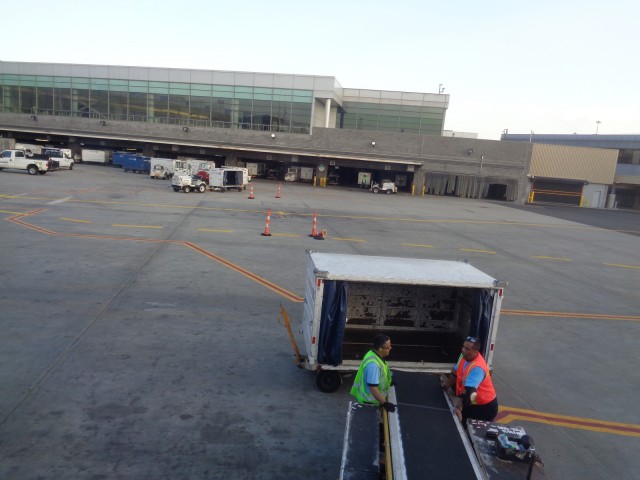 Another myth is that it must be fun to be working around planes all day long. Sure, as an AvGeek, I did enjoy looking at planes, however it’s not always fun and games. Most of those planes on the ground, to a ramper, are either things that they need to be working on or something that is out to kill them.

BONUS:Â Ramp Operations â€“ Whatâ€™s Going on Out There?

One of my favorite jobs on the ramp was to be the chocks agent. My job was to be the first person to touch the plane, once it arrived. Â However, the scariest part of that job is standing right under the jet bridge, looking down the barrel of an engine spinning at highÂ speed. Â The first thought through your head is, â€œI sure hope I donâ€™t get sucked into that spinning engine.â€ Although it has been rare for a person to end up in an engine (and it should be less), other objects would end up in them more often. 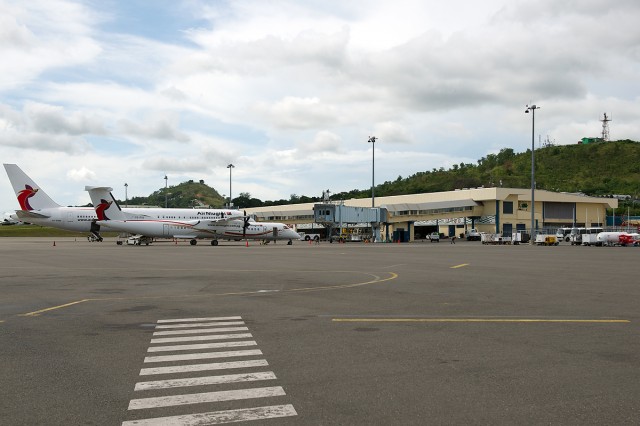 Big and small, have to keep passengers moving at the airport – Photo: AirlineReporter

There is another myth that every ramper is as strong as an ox — you know, from throwing those bags around all day. Well that sure as hell ain’t true. Not all ramp agents are throwing bags around, so there is a mixture of people.

For a narrowbody aircraft, like the 737, we worked as a crew of four, with two inside the aircraft and two outside. Â Generally only one of those two was actually having to throw bags. Â The other person was stacking inside the cargo compartment (commonly referred to as â€œthe pitâ€) while the other two were loading the conveyor belt.

I had my time throwing those bags, but I would do that over stacking any day of the week. Â That doesn’t mean to say I liked throwing bags (or boxes for that matter), just that I would do it because my stacking skills were atrocious. 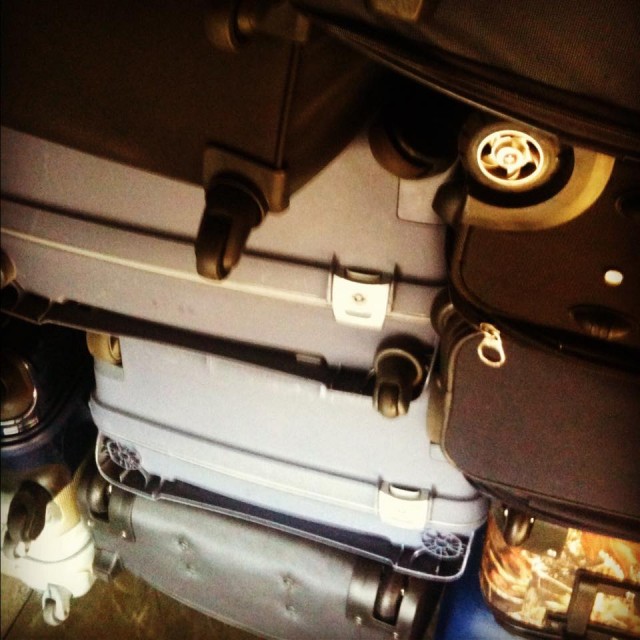 This may look like a good stack, but handles are in and there are no tags. Bad Ramper! Photo: AirlineReporter

Throwing bags around though is the where we come to the biggest myth of them all. We have all seen videos or watched it out the window ourselves; rampers carelessly throwing bags. Many feel this is the main reason why bags get broken. Yes, some do, but there are many other people and machines that touch your bag before the ramper even sees it.

Inside the airport, where the bags are collected, scanned, and sent on their way to the carts is a giant set of conveyor belts that move continuously. When your bag passes through a point and it reads the bag tag barcode and the computer says, â€œthis is yourÂ flight, time to get off,â€ a giant arm punches the bag off the belt onto the piers where the bags are collected.

This giant arm (funnily enough, called the puncher) is what will break your bag. It has to push the bag off the belt onto the pier and do it fast enough that it doesn’t get stuck or make it past the required point. It is pretty violent, and one of the things you do not want to get your body near. So, don’t go blaming the ramper for your precious luggage being broken; it probably happened well before it made it to the plane.

Now. That being said, I should probably admit that the first bag I touched on the ramp — I ripped the whole bottom off. Sorry!

It is not always fun on the ramp either. Sure, if you have a good crew, things can be pretty decent at times. But the weather is not always fantastic. It can be cold during winter, hot during the summer, humid, etc.

When it is wet on the ramp, life is miserable. You are soaked, everything is metal around you, so it is slippery and once you get wet, generally you stay wet. Try pushing panels open or closed on an aircraft with wet gloves or wet hands. So not fun!

But, when the sun is out, life is just as bad. Â Now you have the sun trying to turn you into a lobster, the airport is nothing butÂ tarmac, so it is hot and baking on the ground and it reflects easily. 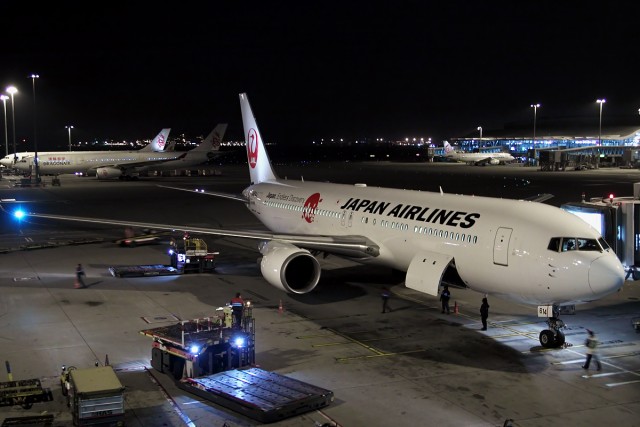 The last myth is, â€œyou only have to move my suitcase a short distance, it can’t be that hard.â€ Sure, there are light suitcases, like the ones that are carried onboard and they can be easy to move.

However, in general, what you are checking is never small, nor light. Â The average weight of a checked bag is around 50 lbs. Â That is NOT simpleÂ to move at all, and those are the easy bags.

You get to see some interesting bags as they come off a plane. Golf bags, bike boxes, gun cases, and then there is the cargo. So much cargo. Cargo is a major part ofÂ how airlines make their money, Â and with that much cargo, things can get complicated. 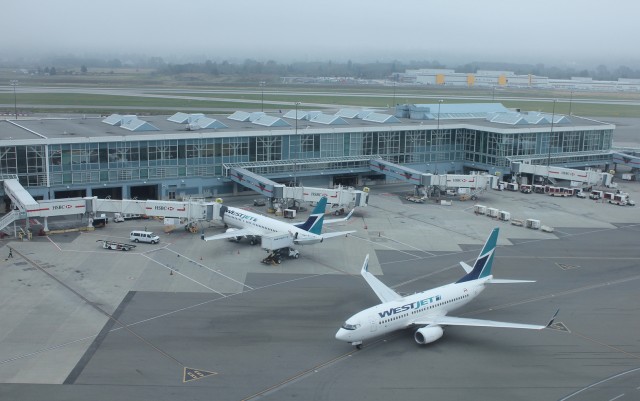 Have to keep the planes moving – Photo: AirlineReporter

Cargo is the one sure thing to break your back. Â Everything from seafood boxes being shipped between cities (often weighing 100lbs) toÂ fresh flowers and herbs (never would I thought that I could choke on the smell of fresh herbs). That said, the one thing that really does suck is aircraft parts.

These essential items (often called AOG, for Aircraft on Ground) are generally being shipped because a plane needs to be fixed. They have priority over everything else (even your precious suitcase). Many a time I have seen a cargo manifest that read “AOG” and I shuddered thinking what it could be — the worst are aircraft wheels.

Even small aircraft wheels are not easy to move around. A main landing gear for a 737 takes two-to-three workers to move. Imagine a main gear for a 777 or an A380 — pass! 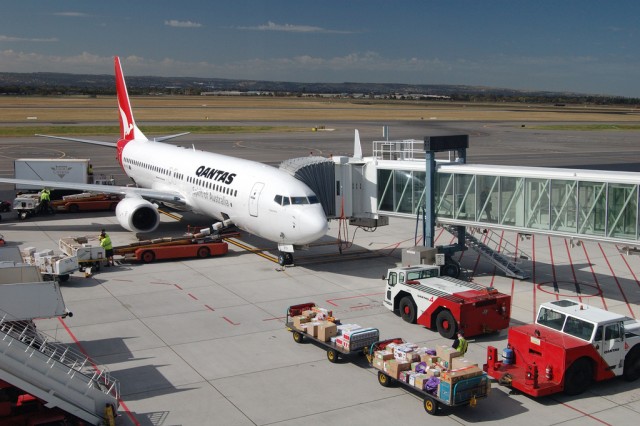 Ramp life is the same the world around Â – Photo: j10f2 | Flickr CC

So now that you have read some ofÂ the truths about life on the ramp, what can you do about it to make sure your items get from A-B without a hassle? Donâ€™t even think that a fragile sticker or label on your bag will get you special treatment. It wonâ€™t.

Also get rid of all those dangling labels, strings, or tags on your bag. These are the items that will surely get jammed in a conveyor belt and cause them to be broken off. If it does get jammed and the conveyor doesnâ€™t rip it off, sure as hell a ramper will “unjam” your bag.

Life on the ramp isn’t easy; there are a lot of things that want to kill or hurt you (and that includes the passengers, sometimes). Â So if you are looking out your window and see a ramper — give them a smile and a wave. You never know, it might make their day.

I am AvGeek. Hear me roar! Email me: [email protected]

https://www.airlinereporter.com
Flying a SATA Airbus A310 “Football” to the Azores
Waiting My Whole Life to Fly Business Class — Just to be Disappointed
9 Comments

I am a ramper at Seatac and my company services KE. I think I can tell that day was one of our easier days because KE is on S12

So, it isn’t as fun as it looks, and I won’t get chiseled abs from the job? That’s disappointing!
I always feel for the rampers on -30 degree days, +30 degree days, rainy days, windy days… I guess that is pretty well 80% of days.
…still looks like a cool job, but I’ll stick to my office gig

Thanks for the fun article!

It’s always fun to load 120+ bags and then have to crawl through the bins looking for bags to pull/reroute thanks to a weather/mx delay causing those people to miss their connection. And James the only ripping you’ll be doing is to your muscles and ligaments ha ha

Actually Judge, that is how muscles are built up, but constantly being slightly ripped, then heal, rip, heal, etc…

Do not forget the 20 gate check bags off the jetbridge you have to get and they still want a ontime dept.

I have done ramp, everything from bags, cargo, Comat etc, cleaned the inside, dumped lavs, and filled the water tanks. When I retired I was doing Catering and Commissary. Why?? much less hard work. instead of 8 hrs on the ramp its more like 3 or 4 outdoors, then its back to commissary and indoors. You have to start someplace.

I loved this read. But even with all this hard work, I must say, I would take ramp line over customer service life any day! Just wish I hadn’t got an SI injury from lifting a person’s 50+lbs bag in the scorching heat.

Nothing beats working a minimum ground time 757turn in PHX with a 200off/160 on +cargo in the summer when its 115Â°ambiant and 130Â°measured at 1030AM…whoooooooweeeee that’s real fun right there!!!

Work at a regional airport and a ramper’s job is double tough. The major airlines outsource to the likes of DGS where it’s a minimum wage job, no benefits and you are basically worked to death. The turnover is horrendous One co-worker of mine says he has a 2 weeks rule. He basically doesn’t even ask their name for two weeks to see if they will last!
Unlike at mainline stations we have to do everything, bag room, in the pits, belt loader, set up the ramp, bag drop, as well as actually getting the planes in and out.

Any passenger want to complain! Walk in my shoes for a day