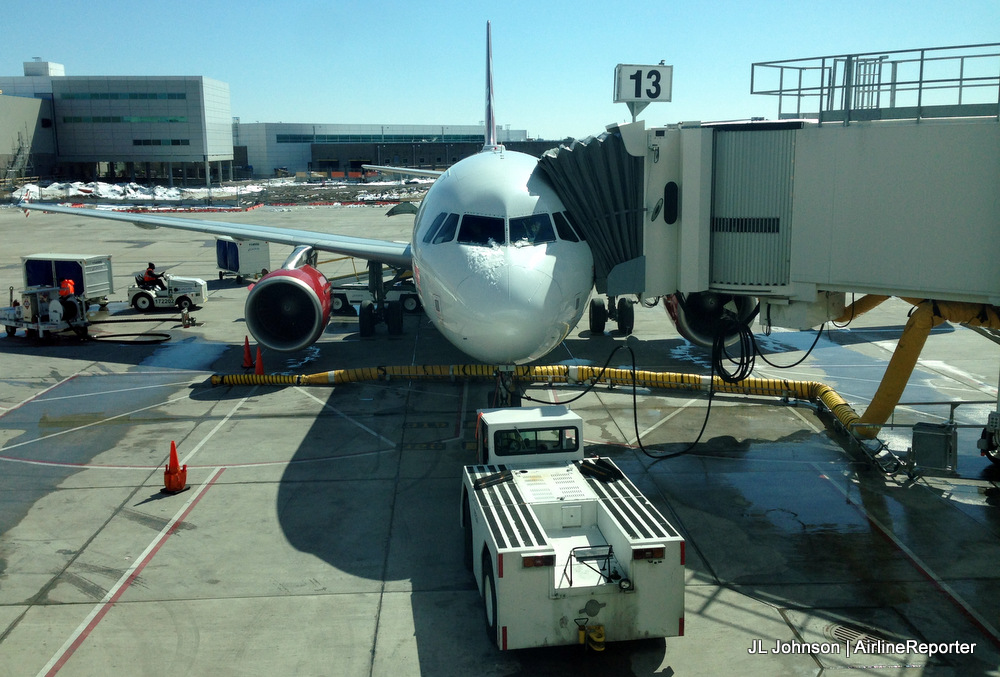 Head-on with N529VA, a Virgin A319 dubbed “Moodlights, Camera, Action”

My affair with Love Field’s (soon to be) only other carrier began with a visit to their website to book my ticket. I spend a lot of my professional time in the web-based application development world, so I’m always interested in how different companies choose to build and design their websites. Usability is a passion of mine, and they really got it right with Virgin America’s website. I would later learn the great experience online would foreshadow aÂ consistent, well-tailored end-to-end experience. 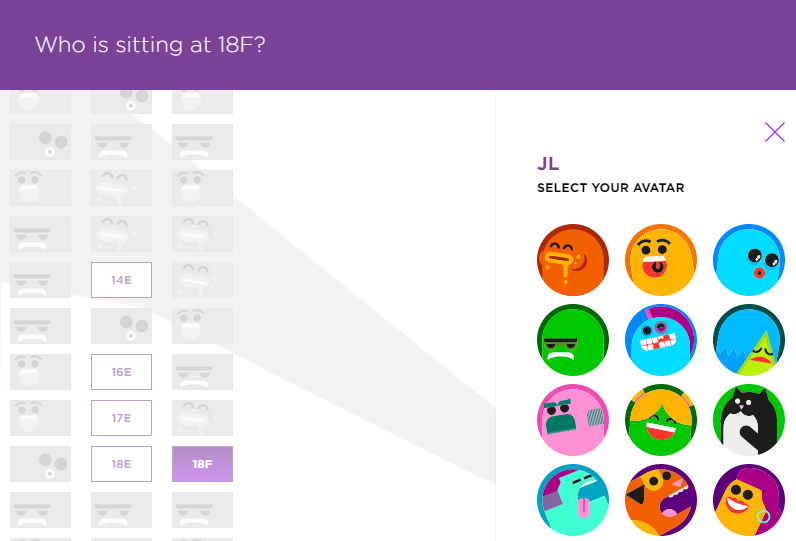 I think one of my favorite (totally useless- but fun!) features on Virgin America’s website was the option to choose an avatar. At theÂ time of booking, the middle seat next to me was empty. I figured if I were to choose the least attractive, most repulsive avatar, perhaps it would dissuade a prospective customer from choosing the seat next to me. After long consideration I went with the top left option. I’m sad to report that my efforts were futile, as the plane ended up being sold out.

After a quick flight from Kansas City to Dallas Love Field via Southwest, I made my way to gates 11 and 13, the two adjacent Virgin gates. I wasn’t scheduled to depart for a few hours but I wanted to check on the status of my flight to SFO just in case, since it was a bad weather day. Snow in Dallas, who’d of thought?

For those not in the know, the new Love Field is a beautiful airport, and keeping with that theme, these two gates were very well appointed, consistent withÂ the over-the-top Virgin style. 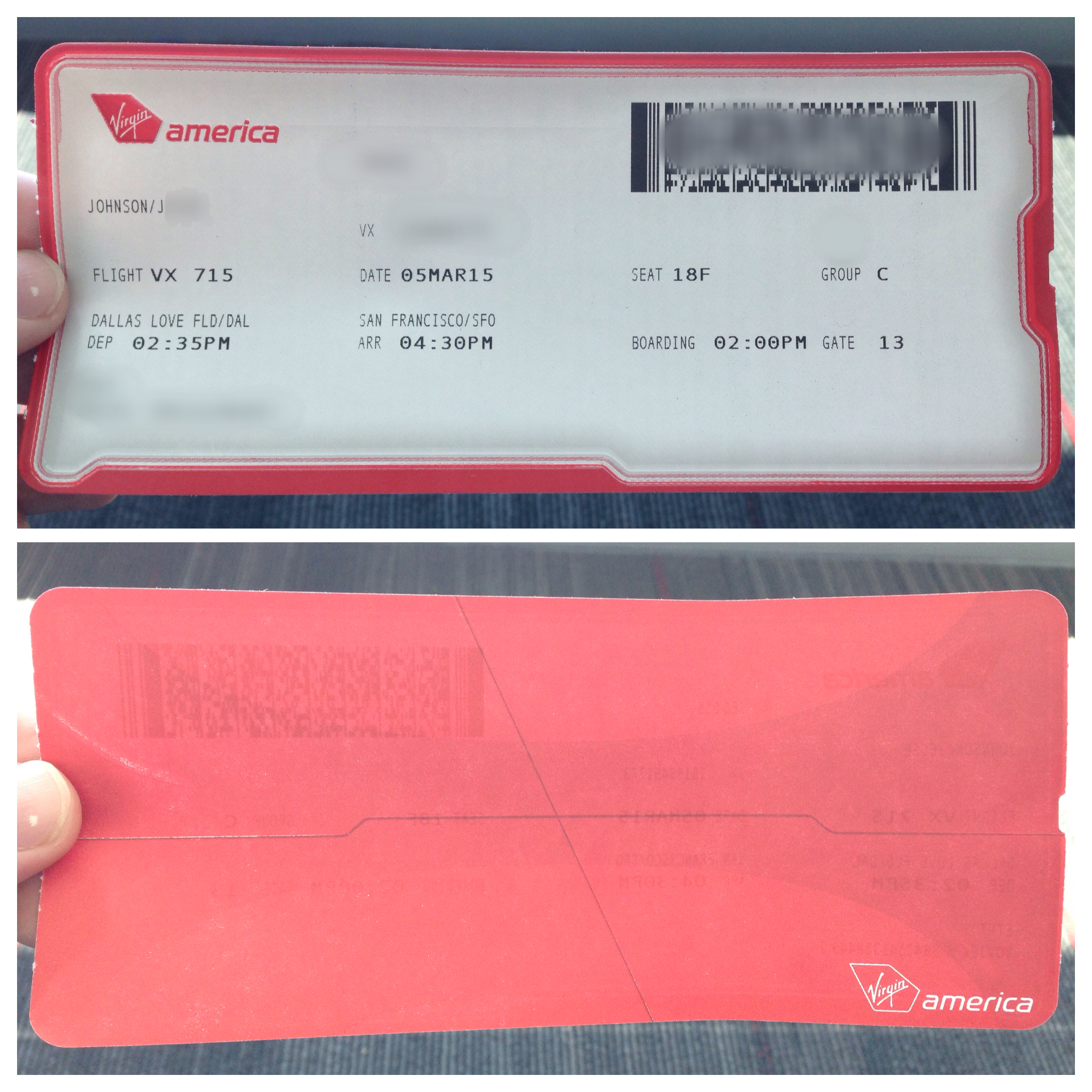 Beauty seems to run in Virgin’s blood. If there was an award for “most beautiful airline” Virgin wouldÂ win, hands down. I also suspect they’d take home the “most hip airline” award too. Other [domestic] airlines just wouldn’t have a chance. From their well-designedÂ website, to theÂ boarding pass, to theÂ excellentÂ cabin interiors equipped with Boeing Sky Interior-esque mood lighting, Virgin is very much “with it.”

I’d be remiss to not also comment on the Virgin America staff. I couldn’t help but notice that every Virgin employee that I encountered was not only friendly, but also attractive. It didn’t end there; even my fellow passengers seemed to carry that theme. Put frankly, everything and everyone was, well… beautiful. I felt out of place. Too much of a good thing is indeed not a good thing. It’s no fun being the only fat guy on the entire plane. 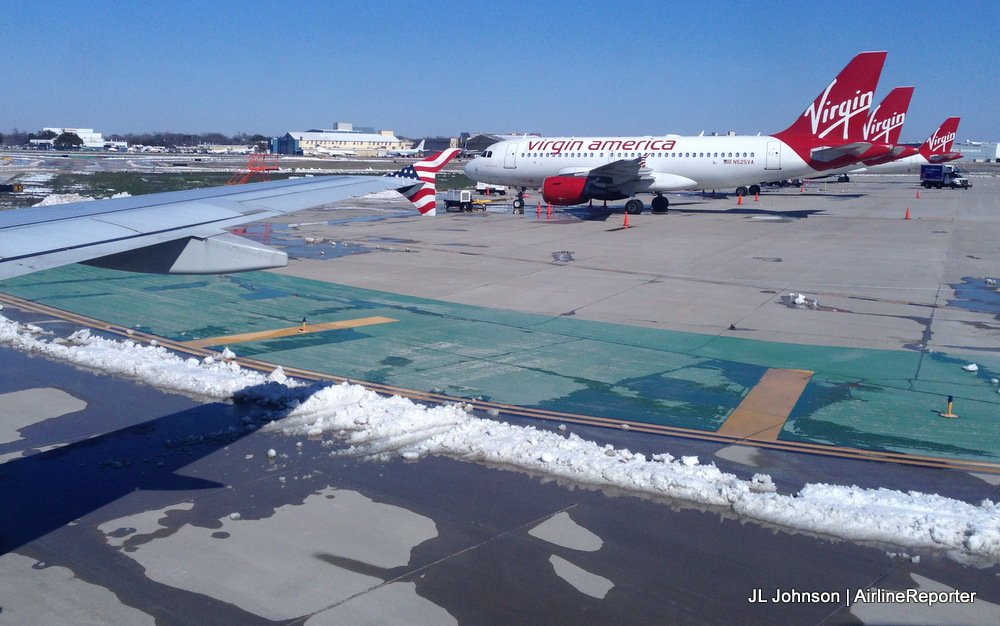 Lots of Virgin at Love. There’s a joke in there, but I’ll leave it be.

As we pushed back, the Red in-flight entertainment (IFE) monitors in the back of each headrest played a rather long, but very entertaining and well-producedÂ safety video. I didn’t have the guts to bust out my camera, but a number of staff and fellow passengers were dancing along to the contagious beat. Safety is important, and there’s no better way to get folks to pay attention than make the safety briefingÂ interesting. I’m glad there are at least two airlines in the US that understand this concept, perhaps a third if we consider Delta’s 80s throwback. Although Deltalina always seemed to be able to grab my attention.

We quickly taxiedÂ for de-icing (in Dallas…) and were in the sky right onÂ schedule. 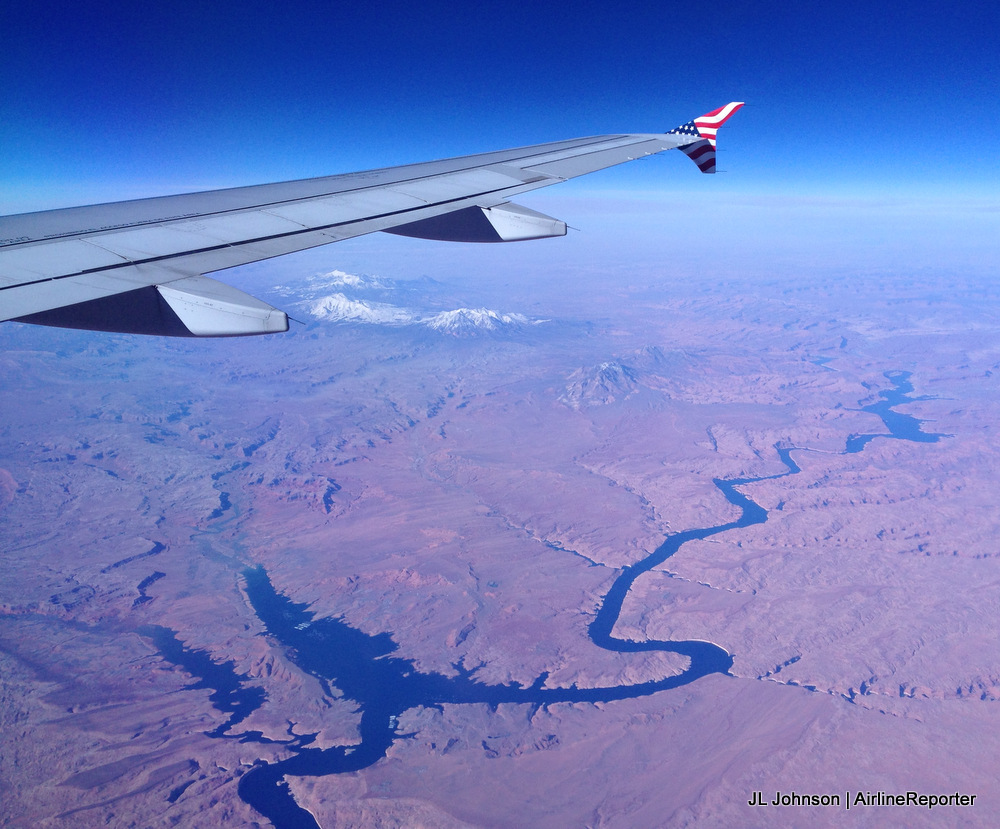 I’m kind of in love with the VX wingtip fence. Photo shot somewhere over Utah.

The flight was smooth and I enjoyed the IFE. There were plenty of options, but I mostly stuck to the route map. At one point it indicated the temperature was -67 degrees Fahrenheit outside the windows. I knew it was cold at cruising altitude, but never considered it would be THAT cold. Let’s pause for a moment to consider what marvels of engineering we fly on each day. A 139 degree temperature spread with maybeÂ a fewÂ inches of separation. It’s mind boggling.

Beverage service was quick, but I was disappointed there wasn’t a snack included in economy. I’ve come to expect that elsewhere and the absence of something, anything, really seemed out of place given Virgin’s clear commitment to passenger experience. The in-flight connectivity (GoGo) was on the expensive side, at $16.18 (including tax) for an all-day pass. That is more than double what I’m used to paying on Southw… Er, elsewhere.

I was told my plane had in-seat power but I sure couldn’t find a plug or USB port. I later learned it was in an awkward spot under the seat — go figure.

The remainder of the flight was uneventful. The photographer in me is compelled to mention that the windows were crystal clear, which made for some great views.Â It was easy to lose track of time staring out the window as the landscape transformed every 30 minutes or so. 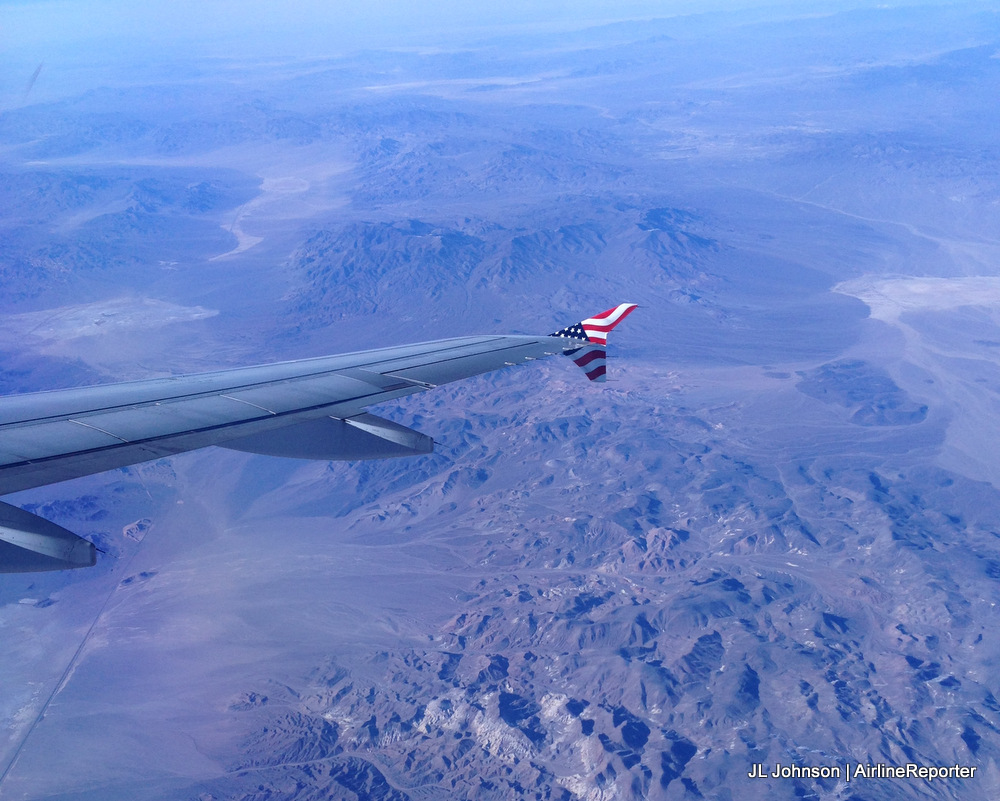 It was a beautiful day to fly. Notice the traffic in the upper left-hand corner.

Conclusion
The only opportunities I see for Virgin to improve are to maybe call up my friends at King Nut to see about working out a deal to secure snacksÂ for those of us schlepping it in the back. That, and get an iPhone app. It was hard for me to come to terms with such a classy, tech-invested airline having such a glaring hole in their otherwise solid offering.

Virgin has a beautiful class-leading product and my experience was overwhelmingly positive. The ticket DAL-SFO was a mere $124, very reasonable given the city pair.Â While they don’t serve my market (yet) I could very much see myself on a Virgin flight again soon.

I am excited to continue sharing my adventures in future reports — stay tuned.

I’d choose the cat avatar since so many people are allergic to or just don’t like them!

I also want to try a Virgin airline. But my home airport (Sky Harbor) hasn’t gotten enough interest from Virgin just yet.

But that could backfire — people might think you are a cuddly kitten and want to sit by you :).

Ha, ha! Totally plausible. With my luck, it would be the Crazy Cat lady from The Simpsons.

Ha! I think we need to look into a case study to see how many people base their selection not on personal preference but in an effort to dissuade potential middles. For what it’s worth, I’m not a fan of cats so I’d pass you up. Then again I’m allergic to middles, so… 😉

Thanks for the comment, Justin. Big thoughts for a Monday morning.

Love the website! I am extremely bummed as VX initially was considering KSLC but so far they have yet to introduce service. SLC is setting themselves up for major failure in my opinion. SWA is no longer using SLC as a focus city, that went to DEN. DAL is taking over and while I like them, the fares from SLC are going higher with each airline that pulls out. However maybe there is hope, AS has invaded and seems to be doing well. AS launched more flights and destinations and I plan on using them in September for Disneyland.