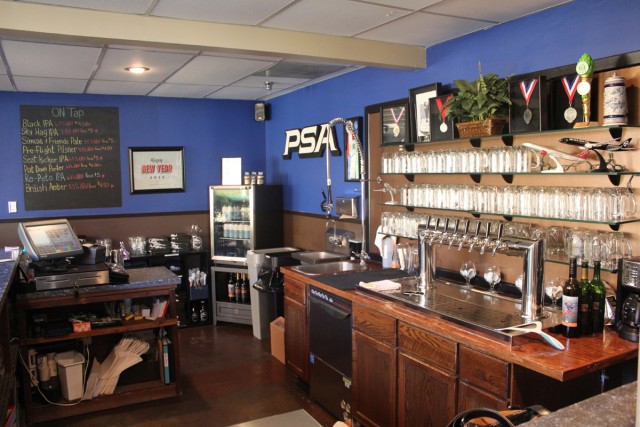 The brewery taproom, where the serving happens. Notice the PSA sign on the wall – Photo: David Parker Brown | AirlineReporter

’œFrom the theme of our brewery, it’s obvious I’m an AvGeek,’ said Alex Dittmar, founder and head brewer at Airways Brewing Company. ’œAs we near our fifth anniversary, it seems like a good time to celebrate the other passion we have besides beer.’ I can definitely attest that Alex is an AvGeek. And sitting down with a beer and talking airliners with him, especially hearing the stories he hears from old-timers that come in — amazing.

Even if you can’t catch Alex to have a good conversation, the place (not surprisingly) attracts AvGeeks, those that work in the airline business, and also with Boeing. It is typically easy to make a friend or two and start talking aviation. 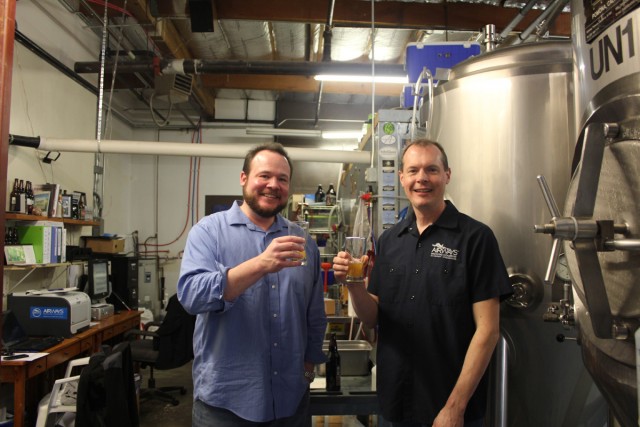 Alex and me in the brewery where I tried #AvGeek beer for the first time. Check the sweet stickers in the background (might have to click on the image for a larger version) – Photo: David Parker Brown | AirlineReporter

If there is going to be an #AvGeek beer, it needs to be done right. This isn’t a light beer — it comes in at 6.1% alcohol by volume and 50 IBUs (International Bittering Units) and was made to “showcase the hop flavors and aroma, and also be extremely balanced.”

During my visit, I had the opportunity to try some right out of the fermentation tank (totally cool, by the way). And it is good. Damn good. We didn’t want a beer that wouldn’t live up to AvGeek standards and trust me — this does!

Looking to try some? They will be available in 22-ounce bottles throughout Western Washington and the Portland, Oregon area at select specialty bottle shops. It will also be available to purchase from their website.

Or, if you want the real deal, head to their taproom and/or bistro in Kent and have some on tap — the best way to drink beer. And if you go, be sure to share a photo with us via the @AirlineReporter Twitter account. Get a shot with you, the #AvGeek beer, and one of our #AvGeek stickers… uber bonus points for you (and maybe a re-tweet).

Just some of the airline-themed beer that they have created – Images: Airways Brewing

Also, this is not the only airline-themed beer that Airways Brewing Company has created. I fell in love with the image for the Sky Hag IPA. If asked to think of an old, grumpy flight attendant that might have been flying on a domestic carrier (I have one in mind) a bit too long, she is EXACTLY what I would come up with.

https://www.airlinereporter.com
How to Upset Someone With a Fear of Flying
Saying Goodbye to the Last US Airways Boeing 767
8 Comments

Sky Hag IPA – lol…LOVE IT! 🙂 Next time I’m in Washington state, I’ll be sure to check this brewery out. Great post, thanks!

awesome… this is a winning combination!

I wonder what % alcohol Seat Kicker IPA is?

Will they only be serving #AvGeek HPA at the Social or will they have any of their other brews available? I like beer, but I’m not a big hoppy beer guy. But I’d love some Pre-Flight Pilsner! Being able to try a few of their different varieties might be nice!

Yup, there will be other beer and non-alcoholic options. Also hoping to have some cider for the gluten free folks!

David, you’re welcome for the introduction oh so long ago. 🙂 Glad to see this great collaboration “take-off.” Cheers!

Bags not packed yet. T-48 hours to my planned departure. Will definitely have a few when I get to AGF15.

Next time I am in Seattle I will have find this brewery if only I had known about this place last year I would been there in a flash as I was in Seattle on my way to Osh.