Airlines in the modern world seem to use social media one of two ways. Â Either as an effective marketing tool with no ability to handle any customer service functions, or as a customer service tool with little-to-no ability to market effectively. Â There are a rare few airlines that can do both of these things and one of them is Southwest. Â Recently, theyÂ began operations in their new Listening Center, a kind of “social media command center” and I had a chance to see how it works.

In some forms it is a great way of sharing things with others, like what you are doing or where you are going. Â However, it is also a great tool in getting a message across or being able to get some things fixed. Â As social media has grownÂ over the years, it has become more and more apparent that businesses need to address these platforms as a separate communication tool and start to use them effectively. Â The Listening Center at Southwest is the first of its kind and is staffed by up to nine people at a time. 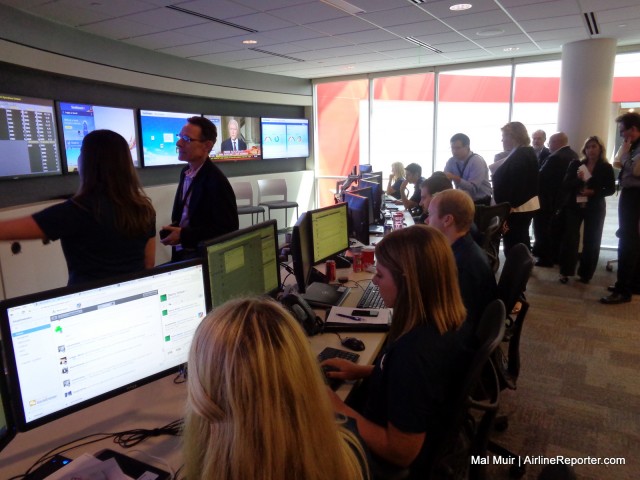 Fully-manned Listening Center during a tour for SouthwestÂ Media Day. As the airline reveleaed their new livery this day, social media was in overdrive.

The Listening Center doesn’t just monitor the main social media channels, but it is their to engage people as well. Â Being able to both see what other people are saying, and then have the effective tools to engage, isÂ what the center is all about.

It’s set up like you would expect to see in a tech command center, with work stations facing a number of large screens against the wall. Â Each screen has a different function, allowing a broad spectrum of information to be quickly seen. Â The screens monitor things like Operational Performance Data (sent over from the Network Operations Control, or NOC), recent tweets that mention Southwest, and photos or pictures from around social media that mention Southwest.

One other screen monitors the â€œinfluencersâ€, those people in social media who might be influencing other peopleâ€™s opinions (perhaps like @Airlinereporter — yes we make the list time-to-time), the kind of people that Southwest may want to use to focus their message. 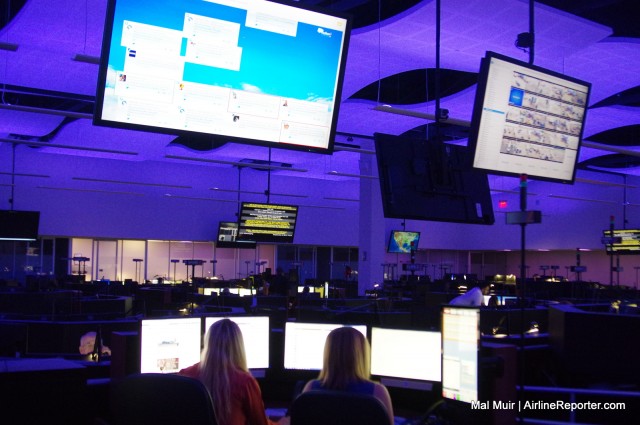 You are probably thinking â€œhow does this all work?â€. Â Well, the staff who are employedÂ in the Listening Center donâ€™t just have the ability to say â€œhey thanks for flying with usâ€; Â they can do many other things.

They have the ability to help fix booking problems, or even help to hold the plane in rare cases. Â I have dealt with them myself trying to work out why I couldn’t check in for my flights, and they even politely reminded me I needed to use the right confirmation code and were able to help me with that (yes, even us AvGeeks have user error some times).

So, while they are people who can make decisions and get things done, how do they do it? 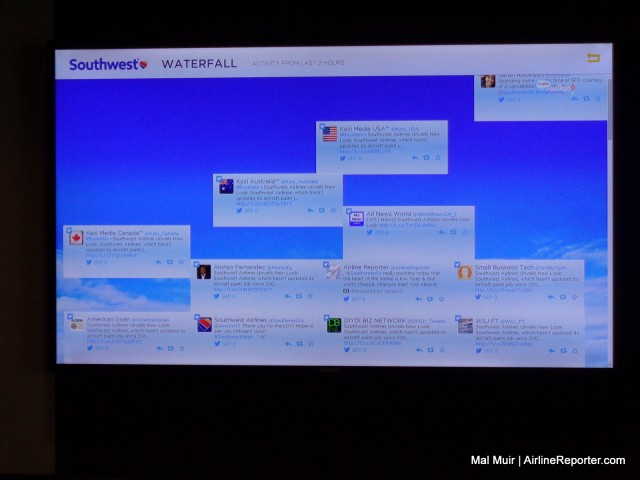 Want to see what is being said about Southwest out in the Twitterverse? This waterfall screen you can do just that. Notice one of our tweets is on there — rad!

Using specially-created tools of the airline along with operational data, they can quickly and accurately address issues. Â Sitting on your plane in Midway waiting for a gate and tweeting your frustration? The staff in the Listening Center can quickly work out what flight that is and then try and find out what the problem is.

The Listening Center even has a mini-outpost in the NOC that can address these kinds of operational issues quicker. Â Need to connect between flights with very little space due to delays? The listening team in the NOC are probably well ahead of the curve and can let you know that your flight will connect.

That is the great thing about having the social media access in the NOC, as the information can go both ways. Events in the terminal or outside may not be noticeable to the dispatch staff. However, a few tweets from customers may trigger something andÂ things can be addressed quickly before the trouble gets too big. 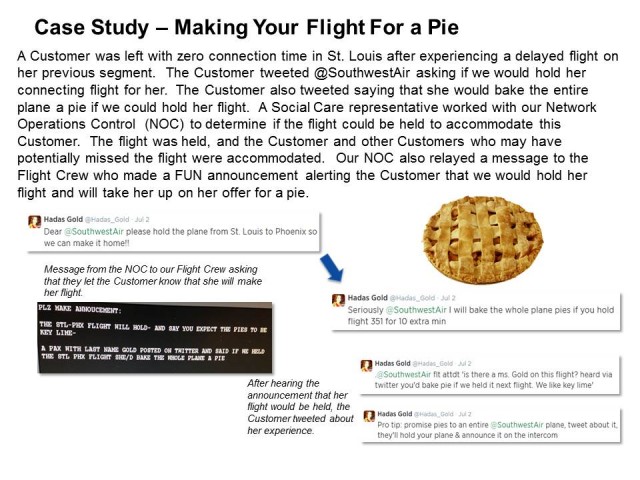 This example of a slight bit of humor does give you a feel that the people working the social care side are real humans – Image: Southwest Airlines

With so much hardware and software available to the staff, the only variableÂ left is the quality and training of the staff themselves.Â The most important thing with social media is the personal touch. You want to have the right mix of compassion, knowledge, and the ability to read context as well (which is really tough with only 140 characters). But a sense of humor goes a long way.

A recent example popped up that showed this fact. Â A passenger had tweeted Southwest saying that if they held her connecting flight, she would bake the entire plane a pie. Â Southwest was able to hold her flight (though I doubt it was because of promises of pies) and when the message was passed back to the onboard crew members to make the announcement, they dropped the hint they like Key Lime Pie. Â A little bit of humor in this situationÂ made that one passenger feel like she is heard, that her tweets made it through, and a small little joke could make someone’s day.

In my own experiences with interactingÂ with Southwestâ€™s Social Care staff, I have been helped quickly and my issues were resolved. Â These kinds of quick, easy, customer service contacts are something I look forward to in the future – if only every airline would follow. Â Have you dealt with Southwestâ€™s Social Care team? What was your experience (careful, they are probably listening)?

Thanks for the fun story, Mal. Social media or not, being polite, even in difficult circumstances is a great way to open the conversation. I can imagine that they also get a few notes that are less than… and do their best to turn them around…

You on social media Cook?