On a sunny Everett friday morning, press, dignitaries, and staff all gathered on the ramp outside the Everett Delivery Center.  In front of us was a brand-new Boeing 777-300ER, a giant red ribbon, and two dragons.  China Airlines is the newest carrier to receive this twin-jet, and since this was their first of the type, a large ceremony was called for.

China Airlines has been a Boeing customer for over half of a century.  Their first Boeing aircraft was the 727, which entered them into the era of flying internationally within southeast Asia.  Then, in 1970, they added the Boeing 707, which allowed them to begin transpacific flights to San Francisco.

Soon enough, they were expanding and other North American destinations were added.  The airline grew, taking on 747s and, after the years passed, they had a fleet of 13 747-400s flying around the world. 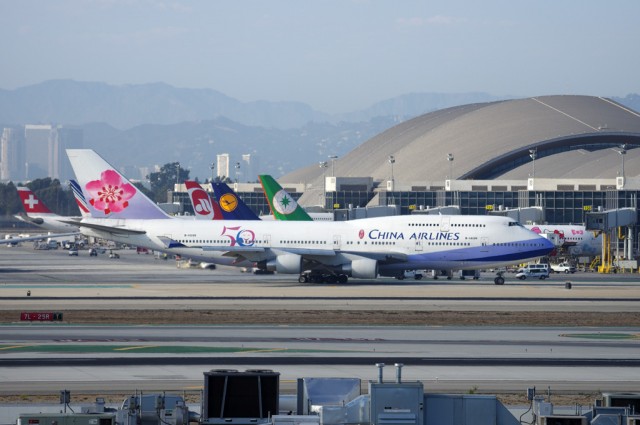 ’œChina Airlines has been a valued Boeing customer for over 50 years and we are honored to celebrate the milestone delivery of their first 777-300ER,’ said Ray Connor, President and CEO of Boeing Commercial Airplanes.  ’œThe airline’s new 777-300ER represents the beginning of a new era for China Airlines and the people of Taiwan.’

Chairman of China Airlines Huang-Hsiang Sun said that over the past two years the airline has taken a brand new approach and philosophy to cabin design.  The customers can feel, eat, see, smell, and taste Taiwan. The cultural experience starts with the flight, even before arriving at the destination.

The airline has configured their new aircraft in three classes, with 358 seats.  Premium Business class is the high-end product, with 40 seats, and the new Premium Economy class has 62 seats.  Economy, in the back, has a total of 256 seats.

All three cabins were designed by the airline’s chief designer Ray Chen.  The cabin design is meant to ’œreinterpret classic aesthetics through a taiwanese lens and encapsulate the airline’s brand essence and evolution.’  All I can say to that is that the aircraft looks fantastic. 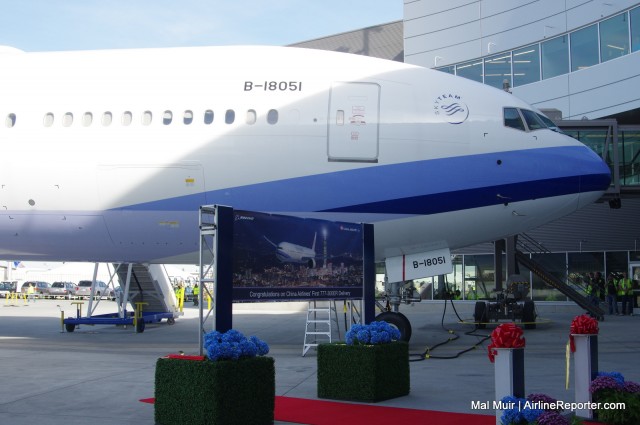 The business cabin is stylish with 40 seats across two cabins.  Configured in a 1-2-1 layout, the B/E Aerospace Super Diamond seats have been customized to the airline’s choosing, with deep purples and greys along with dark and light wood paneling.  The wood can be found throughout the cabin and it feels slightly reminiscent of bamboo.

The seats are all fully-flat, and the reverse herringbone setup allows all passengers direct aisle access while still providing plenty of privacy. 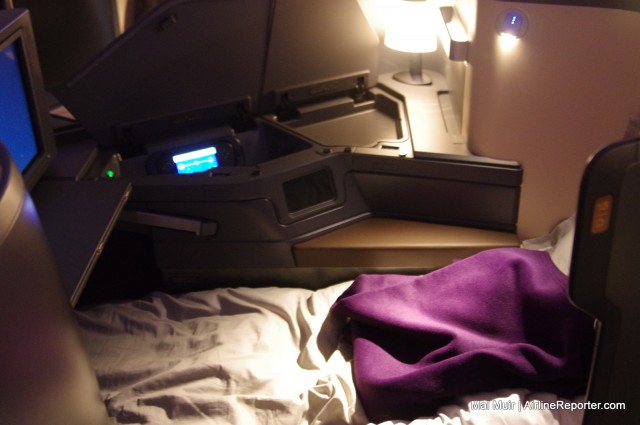 The new Premium Business class on the 777-300ER is the B/E Super Diamond seat, seen here in the fully-lie-flat mode

Premium Economy has a total of 60 seats setup in 2-4-2 configuration across the cabin, and all feature 39 inches of pitch.  The seats are all fixed-back, so rather than reclining into the space behind you, the seat pan slides forward and you recline into the seat back.

A three-position foot & leg rest at each seat allows you to stretch out and enjoy the space.  There was ample storage and this was one of the best premium economy products that I have seen —  a sure-fire winner in the market. 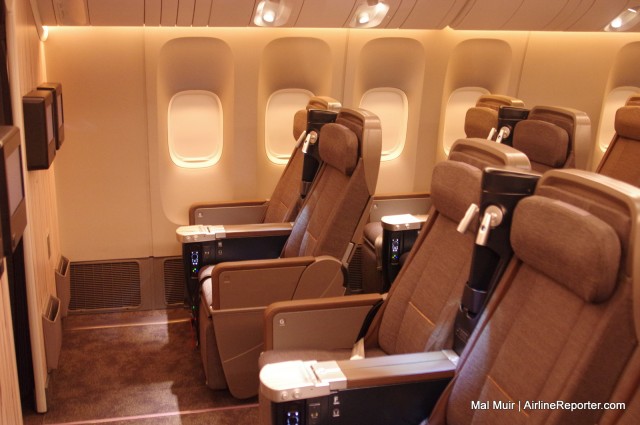 China Airline’s new Premium Economy class seat has a 39″ pitch and with a fixed seat back means you do not lose any of that 39″ as the person in front of you reclines.

Economy class is unfortunately in the very popular compressed format of 3-4-3.  However utilizing the Zodiac Aerospace slimline seat does give a little bit of hope to those of us who spend most of their time flying in the back of the plane.

The biggest change in the economy section is 10 rows of the ’œFamily Couch’.  China Airlines has licensed Air New Zealand’s patented Skycouch format and they are the first airline in the world outside of New Zealand to offer it.

The Family Couch (this time targeted towards families with small children, not couples) is designed as a row of three economy seats that has a special leg-rest that turns the seats into an oversized lie-flat couch.

This gives families with small children the space and ability to keep children contained and rested on a long haul flight, which is a great way to keep not only the parents but other flyers happy. 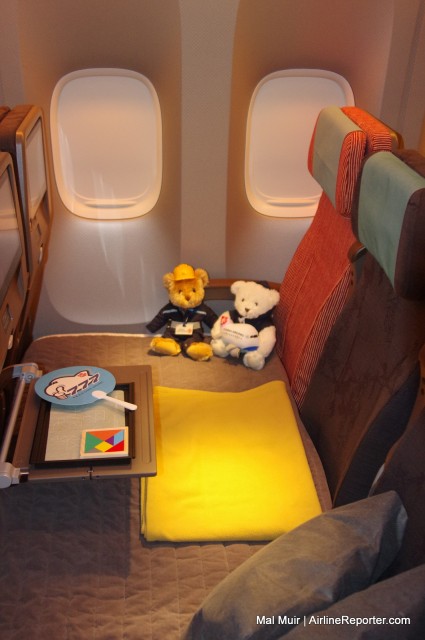 The China Airlines’ Family Couch. Targeted at families with small children, China Airlines is the first airline outside of New Zealand to offer this set up.

All seats feature the new Panasonic eX3 entertainment system with touch screen TVs of varying sizes: 18’ in Business, 12.1’ in Premium & 11.1’ in Economy.  Wi-Fi  is provided with the Panasonic connectivity package with prices beginning at $11.95 for an hour up to $21.95 for 24 hours (which isn’t all that bad).  There are USB & power outlets throughout all cabins as well.

The standout feature of the aircraft is the new ’œSky Lounge’.  It is a bar area located in the doorway at 2L/R and the space is utilized to not only serve customers but also allow them to experience Taiwanese culture.

Guide books and other pieces of literature are on the sides of the lounge along with access to local Taiwanese snacks (I tried hard to resist the pineapple cake bites).

The area is covered in the same wood paneling found throughout the aircraft and a black polished entryway gives the Sky Lounge a refined and contemporary feel. 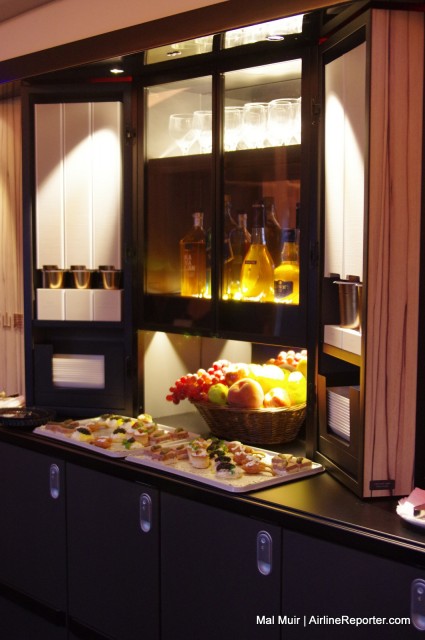 The Sky Lounge is a space that allows Business passengers to not only grab a snack but learn a little about Taiwan at the same time.

The first 777-300ER was delivered today, the 2nd is set to be delivered later in October and the third in November. The airline will first fly the 777 on short-haul flights for training and once ready, they will use the aircraft on flights to Los Angeles, San Francisco & New York.  Eventually they will receive 10 777-300ERs allowing them to phase out their older 747-400s.

With a unique interior design & feature packed list of inclusions, the new 777-300ER looks like a good choice for China Airlines. It might not be a new aircraft type in the market, but it is assuring to see an airline so excited to get the aircraft type. It seems that they will make good use of it.

I think China Airlines is late for getting Boeing 777-300ER. The 777 aircrafts are efficient for long range flights.

What do you think TPE-JFK, TPE-LAX. TPE-SFO and TPE-FRA are, short range flights? Go study your geography and try again!