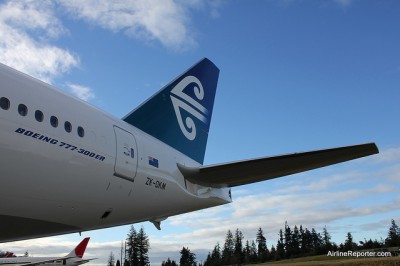 Yesterday was quite the amazing day. Air New Zealand took delivery of their first Boeing 777-300ER. Not only is this the first of five that Air New Zealand will take delivery on, this aircraft also showcases their new interior and new slightly updated livery.

Many different companies will hype something as being new and “the next best thing,” then when you actually see it, you are left feeling disappointed. I have been looking forward toÂ Air New Zealand’s new interior since they announced their Sky Couches almost a year ago (heck,Â I even gave the seats an “Awesome Medal“). What better way to check out the new interior than catch the plane’s first flight with passengers? Air New Zealand was kind enough to invite me to their delivery ceremony (I will blog about the actual delivery in the future) and get a tour of the plane before taking a short flight down to Los Angeles (disclaimer: I did not pay for the Air New Zealand flight to LAX, but did pay for a flight back to Seattle). 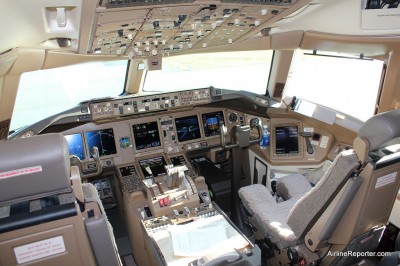 This new interior was set to premier in Air New Zealand’s first Boeing 787 Dreamliner, but due to the delays they decided to put the interior on their Boeing 777-300ER aircraft. When first walking on, you can tell it is different. Modern, clean, trendy and it smelled good. If you like that new car smell, you would love new airplane smell.

The best seats start at the front of the plane and work their way back. And when I say front, I mean the very front. The cockpit of the Boeing 777-300ER is very roomy and someplace I wouldn’t mind hanging out for a few hours. Although they might be best seats in the house, you aren’t able to buy your way into them (other than putting in the time to be a pilot). 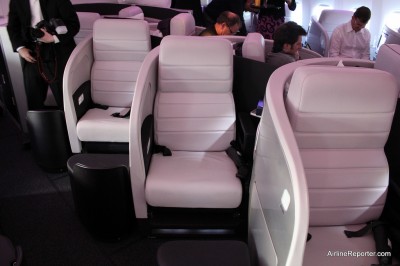 These are the very roomy Business Select seats up front.

The best seats you can actually pay for are located in the Business Premier section at the front of the plane. They have what you expect to see in a premium long haul international seat plus some. They provide a totally flat bed (with memory foam top), a cozy duvet, fluffy pillows, in-flight entertainment and a nice big table you can use to dine alone or with a guest on the small guest seat. The seats are tilted which can give you quite a bit of privacy, but they still allow you to have a conversation with those around you. I was lucky enough to be sitting in one of these seats on the delivery flight from Paine Field (PAE) to LAX and I have to say it was quite impressive (I am actually writing this at the seat right now with a laptop, food, paperwork, drink and camera on the table as well). 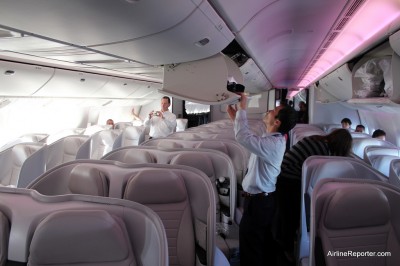 These are the clever Premium Economy seats at a slight angle.

The next option is Premium Economy. Some American airlines might have “premium economy” where it is a standard economy seat with a few more inches of room or near the front of the plane. These are high-end seats that provide ample room and entertainment. The seats do not lie-flat, but it still wouldn’t stop someone from having a good rest. Â The angle provides a good fit if you are traveling alone and want some privacy, but it is not enough to hinder two people flying together. 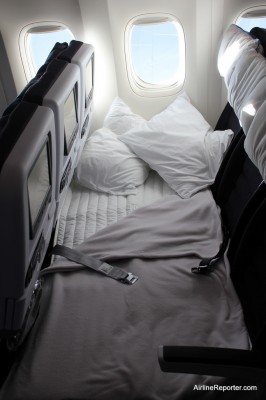 Who says that economy can’t be made fun? When heading farther back into the aircraft you come to black economy seats, but some of these seats are created better than the others. There are 20 sets of seats on the aircraft that can be transformed into a sky-couch. This is a great feat not only for Air New Zealand and Recaro (the company that designed them) but also the future of airline travel. Even though the couch provides a 5’1″ length, I was able to lay down and be quite comfortable at 6’1″.Â Lie-flat seats have been all the rage in First and Business Class seats for international airlines and Air New Zealand wanted to take it to the next level in economy. However, I plan to detail the Sky Couch seats in more detail in a future blog, since they deserve one. 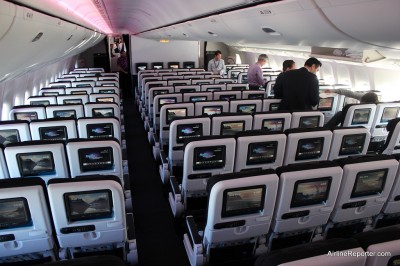 This is economy class, where you will find the Sky Couch and standard economy seats.

If you do not get a Sky-Couch economy seat, do not worry, things still aren’t too shabby. The remainder of the seats are your standard economy seats. Each one still has their own in-flight entertainment screen, PC power and USB and iPod connections (all the seats on board do). You also get a nice little foot net to change up your seating position during those longs flights.

No matter where you are sitting, you are able to enjoy Air New Zealand’s new food options. All seats allow passengers to order food from their seat anytime during the flight. Meal service on your terms, not according to the clock. This Boeing 777-300ER is is the first aircraft to have induction ovens allowing the airline to offer more food choices for customers. Want your steak medium-rare? Sure thing (Well, Business Select are the only folks to get steak. But other classes do have other great food options). Since our flight was so short we weren’t able to experience the entire meal, but they did offer an array of high-end snacks like shrimp, duck and lamb. If the food served is any indication of the full meals, I am quite impressed. 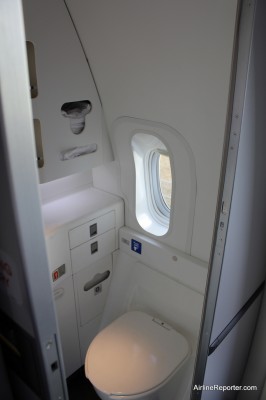 Check out this window in the restroom.

The aircraft has nice little touches as well. In a few of the lavatories you will actually find a window to the outside. Nothing like seeing the terrain below as you do your business. If you do not want to look out the window, others haveÂ interestingÂ images on the wall, like a bookshelf andÂ chandelier. There are other neat additions like aÂ conciergeÂ area (and there is a concierge on-board too) to help you find what to do when you arrive at your destination. If you have kids, they can enjoy story time with one of theÂ on-boardÂ crew. Otherwise you have a great in-flight entertainment system with quite a few options — all free. Of course, I think one of the coolest features was the service (and that New Zealand accent).

The two hour flight to LAX was way too short. I would have loved to stayÂ on-boardÂ and experience the luxury and near luxury treats for a full 13hr test flight down to Auckland. However, since it is close to the holidays I had to make my way back up to Seattle instead. I hope this is not the last time I come in contact with one of Air New Zealand’s Boeing 777-300ER’s.

CHECK OUT ALL 102 PHOTOS FROM THE DELIVERY FLIGHT