Rostislav AlexeyevÂ loved hydrofoils. He was so enamored withÂ the idea of hydrodynamic lift, in fact, that he developed the world’s first commercially-viable hydrofoil. Remembering that Bernoulli’s principle applies to any fluid, it is no wonder that he loved hydrofoils. Underwater wings can reduce the hydrodynamic drag acting on a vessel.

Boeing made the 929Â in the 1970’s; there are lots of AvGeeks that consider hydrofoils to be a worthy marine pastime. Alexeyev, however, took things a step further.

To understand where he was coming from, one needs to consider the concept of ground-effect. When an aircraft is in ground-effect (roughly 1/2 the distance of the wingspan of an aircraft and the ground) it has some very interesting drag and performance characteristics. For instance, for a given wing area the force of lift is stronger, the drag is lower, and the thrust needed to stay aloft is less. Either way, the aerodynamic drag is much lower than the hydrodynamic drag.

Aircraft in Russia had TsAAGi as their equivalent of NASA. Hydrofoils and ekranoplans were shuffled off to TsKB po SPK (it’s even longer in Russian) in 1958. Before then, almost all of the research was done directly by Alexeyev within TKB-19 (his equivalent of an aircraft’s OKB)

Alexeyev wondered what would happen if you put wings on a boat. The thing is, an extremely fast, fuel efficient, heavy lift ground-effect vehicle would be one of strong military interest. This happened sometime in either late 1957 or immediately prior to the creation of TsKB po SPK – the sources are ambiguous. Either way, the military was interested and they made it a top-secret priority. 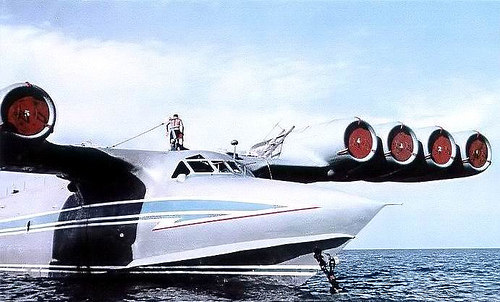 A closer look at the bow (nose?) of the KM – Photo: Russian Navy (unattributed photographer)

The Russian military allowed Alexeyev and his research organization to to build a facility atÂ the lakeside town of Chkalovsk. At this research facility, Alexeyev tested numerous (maximum five ton) models of wing-in ground-effect vehicles. He used this to generate enough data to prove to the superiors that things could, indeed, be scaled up – massively so.

You see, the SMs (Russian abbreviation for scale-model) all worked shockingly well. It was time to build a KM or naval-prototype. When the CIA spotted this 529,000lb monster on the Caspian sea – despite all the Russian-speaking analysts around – they dubbed it the Kaspian Sea Monster.

This ten-engined beast was not an airplane, nor was it a boat. Thus, admirals (such as Sergei Gorshkov) hated it. Did it require officers from the sea fleet? Did it require pilots from Naval Aviation? Either way, it is very hard to pin medals on someone who piloted something that could, at best, be legally classified as an object. Usually, the crew was made up of both types of skipper – it was a regulatory nightmare.

When the KM sank after a case of human error in 1980, it was not recovered. There are a few schools of thought as to why, most of them too lengthy and boring to go into. We know that the data collected from the KM was invaluable, butÂ the test program may very well have had nothing else to offer.

My theory, however, relates toÂ Admiral Gorshkov as the chief of the VMF (the Russian Navy). If there was anyone who disliked ambiguity, while at the same time wanted a navy focused on power projection rather than amphibious assault, he’d be the man to give the order saying “no thanks, we’ll leave it to rust.”

Thankfully, this is not where the story of the Ekranoplan ends. There were actual, real-life, military demonstrators and operational versions.

First, we must deal with the mighty little Eaglet, the A-90 Orlyonok. This was an aircraft of much smaller scale and much more profound flying ability. Unlike the KM, the A-90 was always crewed by (rather disgruntled)Â pilots.

Carrying a little over 300,000lbs of weight at max gross, this was not a small ekranoplan. Carried aloft by the same engines as a Tu-154B, and propelled in cruise by the same engine as a Tu-95MS, I would love to have heard one. 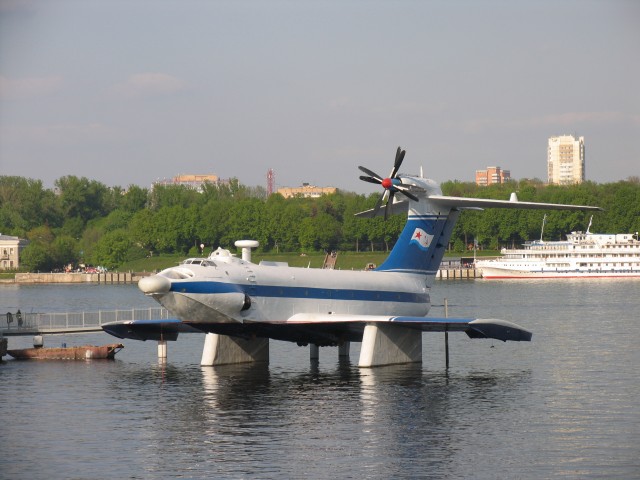 Three A-90s entered service with the VMF. Given their role, they never saw combat and they were always seen as somewhat of an oddity. If they had not been, the proof would have been a massive number produced for hypothetical Bering Straight-crossing amphibious assaults.

It was during the reign of the A-90 testing that Alexeyev was forced away from his dream. Â Despite his extreme devotion to the project, and even after saving an A-90 and its crew after an encounter with a rogue wave, the party would do nothing for him. Alexeyev spent the last few Â years of his life playing tennis in his dacha. He was lost without his work.

I know that I will be shredded in the comments lest I mention the Lun. If you ask me, however, the Lun was not the platform that best suited a ground effect aircraft. Yes, it could carry numerous 3M80 anti-ship missiles at high speed. I suppose the use for it could have been a rapid supplement to fleet on fleet combat, but its range was too low. I cannot see the need for such a heavily-armed ground-effect patrol craft and it was more of a Gorshkov-pleaser than a real venture.

So what of Roberto Ludvigovich Bartini? We’ve talked about him before in reference to the Aerobus program. What I did not mention in that article, however, is that he defected to the Soviet Union, from Italy in 1923. Most of his postings were of an idealogical nature.

What’d that nutter do this time? 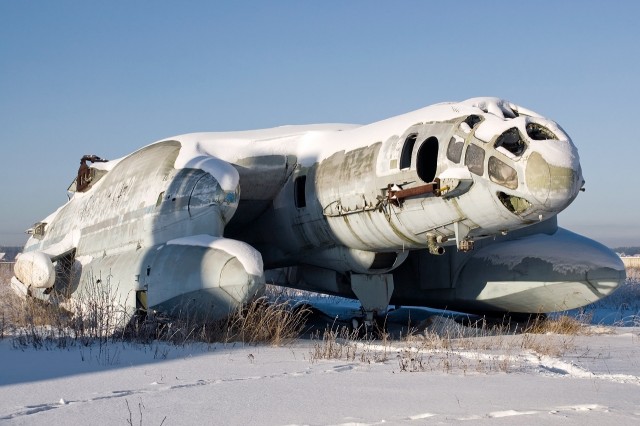 The VVA-14. Not complete – its missing lifting engines and wings. Photo: Alex Beltyukov

Team up with the other design house, Beriev!

Beriev had an amphibious, bizarre, multi-mission maritime patrol aircraft called the VVA-14. It is unclear how much Bartini was involved in the project directly at that point, but his influences are there.

It was going nowhere, quickly, until it was decided that no longer was it to be a vertical take-off Â and landing amphibian – it was to be ground effect! That is when Bartini’s name got added to the project in full. It was also around that time that the aircraft had to be able to escape ground effect and fly as a real bomber once more.

I do not believe anyone took the VVA-14 seriously. I am sure when someone approved the funding they defended it, but come on. You know the old adage – if it looks right, it flies right?

Here’s a video of it – you do not need any more pomposity associated with the presentation:

We’re mostly civil AvGeeks here at AirlineReporter, so what’s the civil deal with the ekranoplan?

This was in 1989 as the Union was disintegrating, so who knows how much of this was idle speculation and back-of-the-matchbook engineering. Regardless, Sukhoi and their subcontractors came up with numerous and vast designs (most of which looked like the A-90). They could carry hundreds of passengers, quickly, across a vast distance in more comfort and style than a ferryboat – for a lower trip cost than an aircraft.

In 1996, Beriev went it alone and pitched a massive ekranoplan that was nearly capable of classifying itself as the world’s largest aircraft when in flight. It was designed to revolutionize commercial shipping and serve as a long-haul passenger transport. Dubbed the Be-2000 (and its larger cousin the Be-2500), it never made it past the “wooden-model” stage of construction. 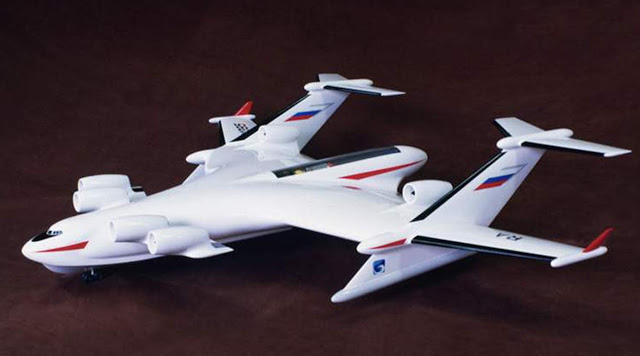 Around the same timeframe, a company called EKIP played with the idea of making lenticular ekranoplan that would seat a whopping five thousand people. Unfortunately, copyright wont let me share those photos – but that’s what search engines are for.

So where does the ekranoplan sit today? 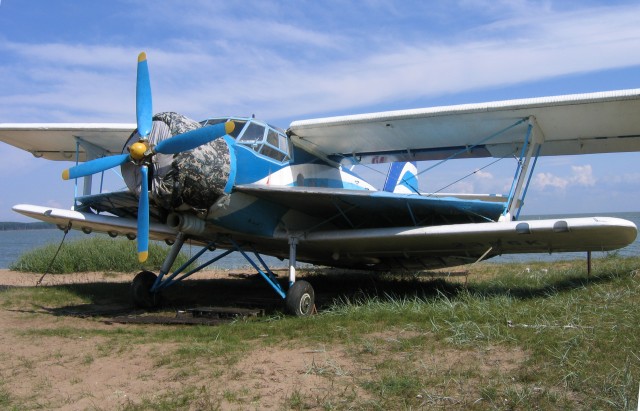 An AN-2 converted into an ekranoplan – Photo: uncredited wikimedia commons

If you have too much money, you can buy one for yourself from a company called Aquaglide. 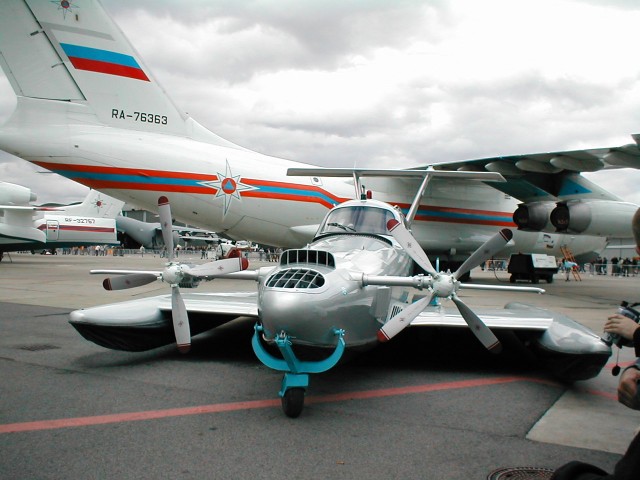 There was no reason for the ground-effect aircraft to go this way. If you ask me, it is because Gorshkov didn’t see what it was, but, rather, what it wasn’t. If you wanted to move something heavy, you used a ship. If you wanted to move something fast, you used an airplane. In his mind, never would the two meet. At least never would the two meet in a way that was relevant.

Maybe he was right; other countries have experimented with the idea of large ground-effect aircraft, but they never went anywhere either.

Sure is a shame – I bet they were an absolute blast to ride on.

https://www.airlinereporter.com
Review of Business Class on American Airlines’ Transcon A321
Inside the Factory: Photo Tour of Where Boeing 747s are Born
6 Comments

There was an article in either Popular Science/Mechanics regarding a ground affects ship/plane being considered by Boeing.Would you remember this article or is my memory just inventing something.If you find the article please print the pic.
Thanks

I would like to suggest that many of the subscribers love all things dealing with Aviation, and would rather see an article on a topic that is not “mainstream” than go several days without an article.

I tend to skip or speed-read articles that are of lesser interest.

I’m not disagreeing that some readers like these types of articles. I think that’s fantastic. More power to you and them. I don’t them like them which is all I am saying. In addition, I will again point out that the site name is AIRLINEreporter.com Not AVIATIONreporter.com. Possibly the site name should be changed?

Thanks, Bernie. A great reminder about how some good ideas are born. Over-water ground effect machines do have potential as heavy-lift transporters, BUT, they are only that. Their effective speed is fixed, a function of wing, weight and power. Slower and they become boats; faster and they become airplanes *That cannot fly*. While far faster than any ship, ,the remain relatively slow and easy targets, wholly unable to maneuver to help defend themselves. Perhaps high lift, but also high risk floating/flying targets.
The several Russian design shops pursued a wealth of engineering dreams, eventually proving themselves slightly wrong on in the flying prototype stage. Why? Sadly (or not?) their dreams were good, but they did not then have the ability to prove or disprove a concept without building and trying to fly a given type… (We did, easily bypassing this type as functional, but ineffective in a deployed role. That general difference in engineering ability likely contributed to the end of the Cold War; those pesky Russians simply did not have the expertise to move concepts like this semi-flying boat to an operational transport. The Russian engineer did NOT get it wrong; they simply did not have the ability to prove that the concept would not work as deployed transportation. The best examples are a period of high waves or a shifting winds. Ophs!

This guy Martin sounds like he could suck start an APU.

Bernie, I have spent hours reading your articles and have enjoyed them all. I especially love the detail you go into with USSR aircraft, a weak spot in my aviation knowledge.