Earlier this year, Southwest Airlines announced a significant number of new direct flights originating from their home base of Dallas Love Field. The newly-announced flights will provide non-stop service to places such as New York, Los Angeles, Denver, and Atlanta.

But why is Southwest, which has been in business since 1971, just now adding these seemingly universal routes to its network? To answer that question, we’ll have to go back in time and brush up on our Dallas-area airport history.

Prior to the opening of Dallas/Fort Worth International Airport (DFW) in 1974, the two cities had a history of contentious competition and missed opportunities. The first was a proposed joint airport way back in 1927. Fort Worth declined the proposal, opting to purchase and operate its own airport independent of Dallas. This led Dallas to build its own airport as well. The end result was the opening of both Love Field (in Dallas) and Meacham Field (in Fort Worth) to commercial air traffic.

In 1940, there was another attempt to cooperate in the construction of a regional airport for both cities, but it was eventually abandoned after neither city could agree on the location or details of the airport. This was followed by the creation of Amon Carter Field, later renamed to Greater Southwest International Airport (GSW), which was barely a stone’s throw away from Love Field.

Finally, in the early sixties, the FAA made it clear to the two cities that it wouldn’t invest any additional money into separate Dallas and Fort Worth airports (quick geography note ’“ downtown Dallas is roughly 30 miles from downtown Fort Worth). This, along with a directive from the Civil Aeronautics Board (CAB), finally pushed Dallas and Fort Worth together in an effort to develop a single large airport to serve the entire metroplex. 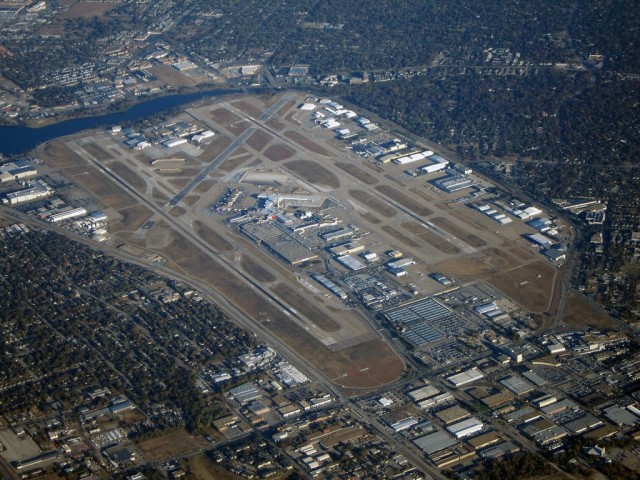 In an effort to make the new airport viable and promote growth, all airlines serving Dallas Love Field and Greater Southwest International Airport signed an agreement to relocate to the newly constructed DFW. In addition, the two cities agreed to begin restricting commercial operations at their old airports.

Southwest Airlines was founded shortly after this relocation agreement and, after a court battle, was granted permission to remain at Love Field. The primary reason that this was allowed can be traced to the fact that Southwest initially offered only intra-state flights, and CAB regulations were applicable only to interstate flights.

Eventually, the Airline Deregulation Act of 1978 phased out the CAB’s ability to regulate many aspects of commercial aviation, and paved the way for Southwest to begin operating interstate flights. Needless to say, the City of Fort Worth and the governing board of Dallas Fort Worth International Airport were not pleased with Southwest’s plans. Their fear was that a growing Southwest, operating out of Dallas Love Field, would pull passengers from DFW.

This is when Jim Wright, a member of the U.S. House of Representatives representing Fort Worth, got involved. Seeing how much money had gone into creating DFW (and, likely, feeling the pressure of his political donors and constituents) he devised a way to protect the investment of resources in DFW. 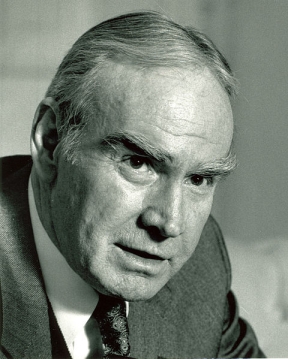 In 1979, Wright sponsored an amendment to the International Air Transportation Act that limited commercial operations out of Dallas Love Field to airports within Texas and the four neighboring states: Louisiana, Arkansas, Oklahoma, and New Mexico.

Now, it may be a little easier to see the significance of Southwest’s recent announcement of non-stop service from Dallas to places like LAX and LGA.

The Wright Amendment was amended a few times over the years to allow for non-stop flights from Dallas Love Field to places like Alabama and Kansas, but remained largely intact until 2006, when a compromise deal was drafted and passed in Congress which, among other things, lifted the ban on nonstop flights outside of the ’œWright zone’ – effective October 13th, 2014.

That is why the announcement of new routes from Dallas Love Field is more noteworthy than usual. On October 13th, as the restrictions of the Wright Amendment fade into history, Southwest will begin nonstop service to Baltimore, Denver, Las Vegas, Orlando, and Chicago Midway. 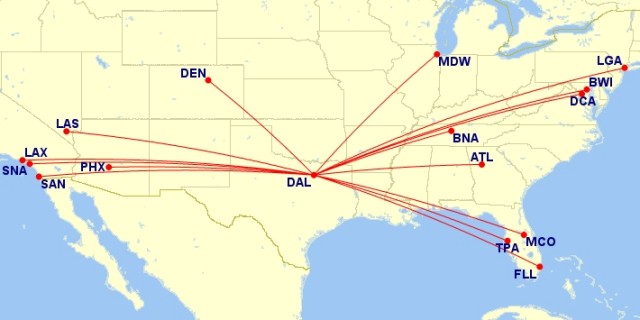 It is old news now, but you may recall that American Airlines and US Airways have officially merged, creating the world’s largest airline. As part of the process, the merging airlines had to sell off dozens of their Washington DCA slots (an airport slot is the right, granted to an airline by an airport, to schedule a landing or departure during a specific time period).

Guess who purchased quite a few of those slots? That’s right; Southwest gained 54 slots at Reagan National and is busy allocating them to flights throughout the central and eastern US.

Southwest Airlines’ new routes from DCA, acquired as a result of the American Airlines / US Airways merger, beginning later this year – Image: gcmap.com

Some of those flights begin in mid-August, with the rest commencing by early November. In all, Southwest expects to be operating 44 daily flights at DCA (up from 17, currently), serving a total of 14 nonstop destinations. That’s quite a boost, to say the least.

It’s an exciting time if you’re a fan of Southwest. With the expiration of the Wright Amendment and the acquisition of numerous DCA slots, the airline is seeing significant growth within its network. In 2013, Southwest was 4th in carried passengers of any airline in the world, and it looks like they want to continue that growth.

So, keep an eye out for some canyon blue and orange aluminum leaving contrails in new directions very soon.

This story was written by John Cameron for AirlineReporter.

https://www.airlinereporter.com
Three Flights in a Day on an A330-300 – Czech Airlines’ Promotional Tour
Fifth Freedom Under Attack? Italian Government Does a Flip-Flop
8 Comments

Good story. One minor error, Greater Southwest airport was not a stone’s throw from Love Field, it was actually much closer to the current site of DFW airport, just south of it, and now the site of American Airlines headquarters, among other things.

Yep, GJ beat me to it…you’d have to a serious arm to throw a stone from Love to GSW and technically, it was in Fort Worth.

BTW, in the little known facts department, an accident that led to a better understanding of wake turbulence happened here in 1972: Delta Flight 9570.

To get a better idea of what this place was like, visit http://www.airfields-freeman.com/TX/Airfields_TX_FtWorth_NE.htm#greaterSW. Paul Freeman runs an excellent site!

Don’t forget the other two pieces that add to the excitement – international flights out of HOU and service to Hawaii. This will sure be one heck of a fourth quarter for Southwest. Hopefully they can manage this huge expansion!

Southwest isn’t flying into Hawaii by the 4th quarter. J/S.

Great article, John. Glad to see more folks talking about the Wright amendment. Here in Missouri we’ve benefited from it a great deal but protectionism is evil, so glad to see it ending.

You won’t see Hawaii until 2017 when the 737 MAX comes on line none of the aircraft that SOuthwest lfies today will make it to Hawaii with their seating configuration (i.e. no first class).
I also think the article is a bit misleading with the term “expansion”, it’s more like realignment since the company has stated that they will not increase the size of their fleet through the end of 2015.

It’s not all wine and roses. The agreement caps Love Field at 20 gates. Can’t put in even one more. What that does is artificially limit the traffic, and that in itself will keep fares higher.

Also for people who don’t live in the DFW area, when DFW opened it was a long way from the highest-earning zip codes, north Dallas. Those were close to Love, and there was a fear that high fare business travelers would avoid DFW. But that was 40 years ago. Now DFW is actually easier to reach for a majority in the Metroplex, because the area is spread out and the freeways going into Dallas have very unpleasant traffic.

Besides that, a lot of business travelers dislike Southwest because a) they can’t upgrade and b) they can’t earn miles for overseas travel.

One last thing…AA has had two gates at Love that they were ordered to relinquish for the merger, and Southwest wanted them. But Virgin America also made a claim, and they want to use them to fly to LAX, SFO, ORD, LGA, and DCA. They would move their operation from DFW. Reports out today are that VX is putting out a “big announcement”, and they are looking for a location around Love for an event. It doesn’t take a rocket scientist to figure out they are going to get the gates, methinks.