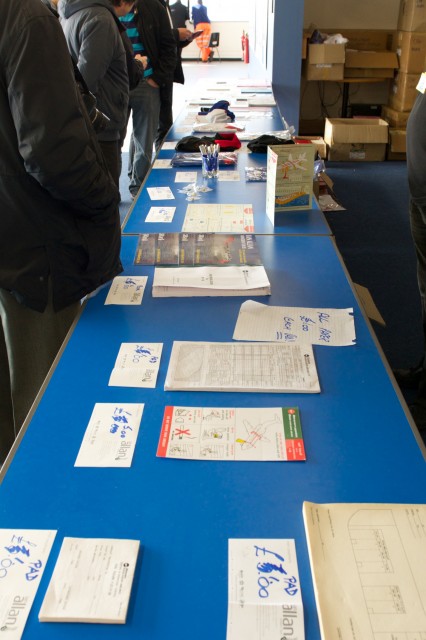 According to Kevin Steele, Biman CEO, there were passengers from 52 countries flying aboard S2-ACR. Over 1,300 of the ~1400 possible seats for the final flights were sold. Clearly, this had been a great exercise for aviation enthusiasts! I was thrilled to be in BHX for this and this was going to be a legitimate party! 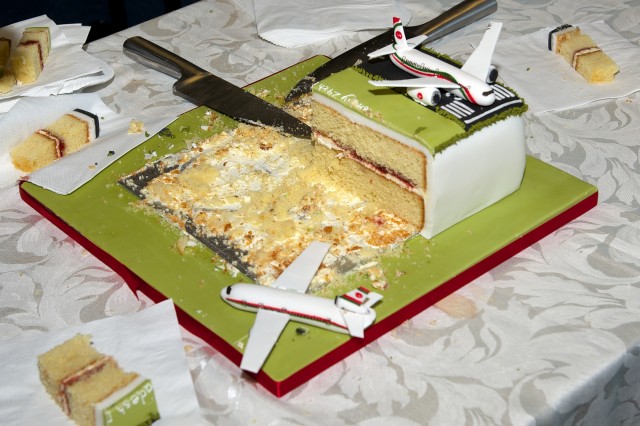 DC-10 cake with 77W cake on the other side. Either way, who doesn’t love plane cake? Photo: Bernie Leighton | AirlineReporter

There was even free cake and champagne! Mysteriously full of cake and inspired by the CEO’s aircraft retirement speech, it was time get on the bus. 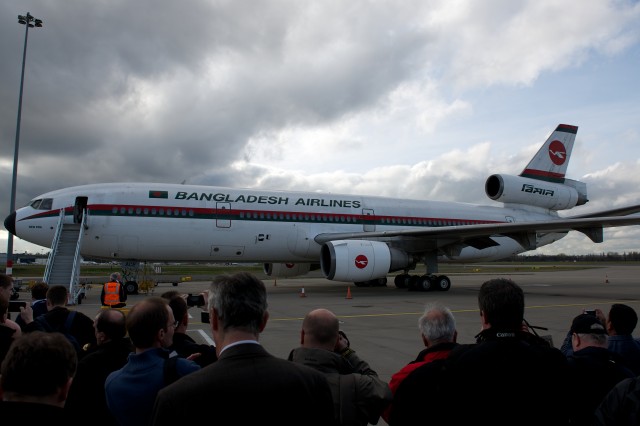 This is what it looks like when 50 people try to photograph an aircraft at once – Photo: Bernie Leighton | AirlineReporter

Thankfully, to prevent crowding, the buses of AvGeeks were brought out in shifts. Still, it’s a hard task to herd that many enthusiasts.

Having taken tons of DC-10 photos in Dhaka, and upon landing in BHX, I just decided to walk around and appreciate just how large this aircraft actually was. It’s a beast. Modern Boeing would say that you could easily get 10Y in a fuselage that wide. Some “blue chip airline” would’ve done it- and everyone would suffer indefinitely. 9Y’s not exactly spacious either. One must remember that this was designed to be an 8Y aircraft. 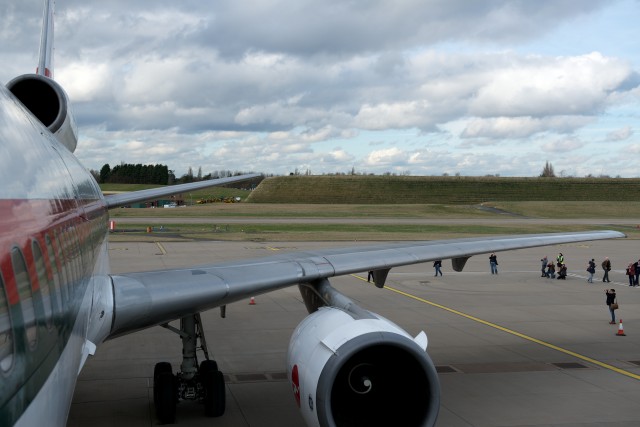 What struck me most upon boarding this time was the absolute eye-watering stench. It was perverse. Seriously, the things we do for this hobby border on the self-destructive at times. I know, scent and safety are separate, wow – I will not forget that. 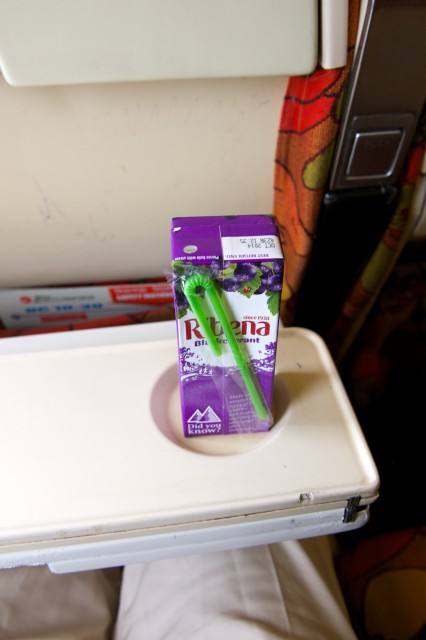 Juice was served – more than most airlines give you on a Y flight of one hour Â  Â  Â  Â  Â  Â Photo: Bernie Leighton | AirlineReporter

The service for this one hour party flight consisted of juice: a box of blackcurrant Ribena, and glasses of orange or apple.

Startup and taxi were similar to my two previous flights with Biman. What was dramatically different was just how fast we were airborne. Probably less than a 20-second, but beautifully-loud, takeoff roll. Keep in mind, the engines were derated approximately 15% for this rocket to 24,000 feet. 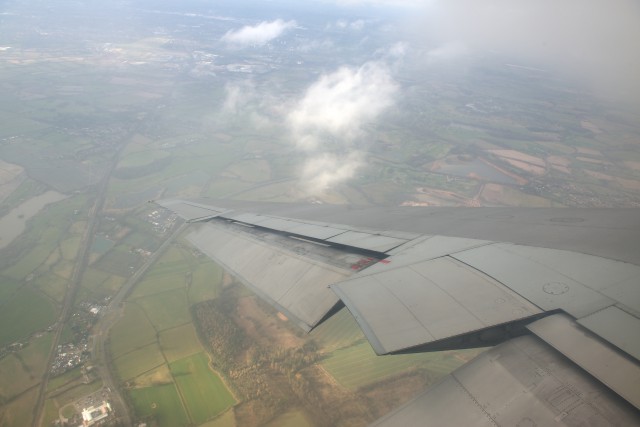 After the seatbelt sign turned off, everyone got up. So crowded were the aisles and so heavy was the air with cameras that I was even more grateful I’d made the very long (much more private) journey four days prior! 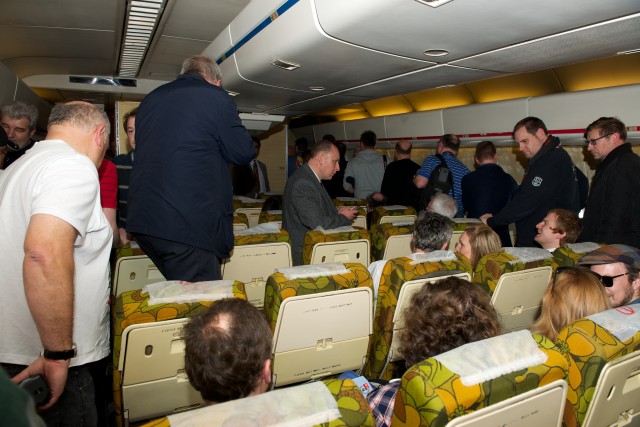 It got so surreal that even the cabin crew began to take pictures of us taking photos! 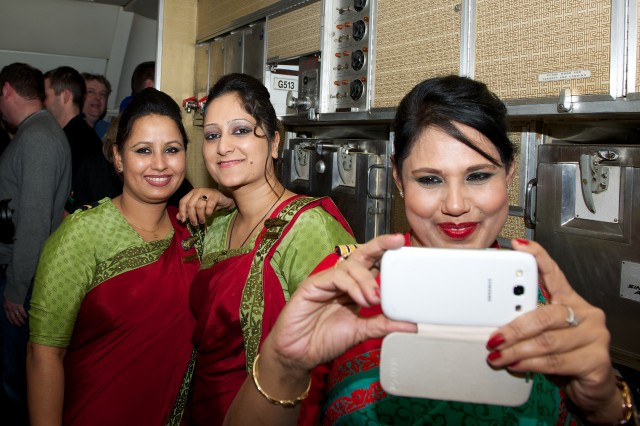 It was a carnival up there – complete with two men from the tour company or Biman loudly selling merchandise! Sadly, most people will probably never see a flight like that again. Or, really, a flight like that ever. It’s an absolute shame!

It was a very fast, very smooth flight. So much so on both accounts that I didn’t return to my seat until just prior to descending through 10,000 feet.

Descent and landing was sad, not because it was a bad landing- it was just that it would be my last ever DC-10 ride. Well, maybe not – but that’s for another article on another continent. 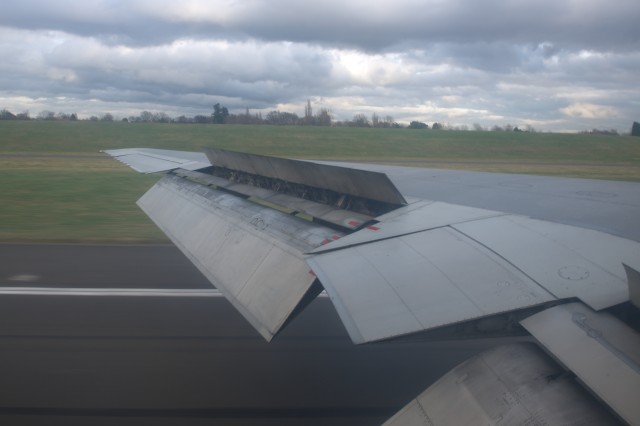 This always will remain the only landing where it was acceptable to clap. Do it any other time and you’re a jerk – this time it had to be done. 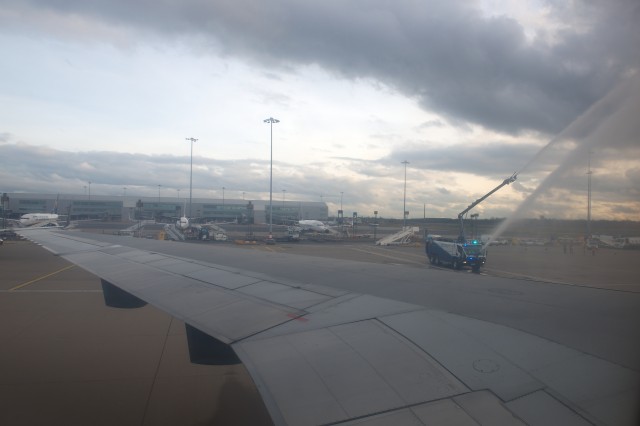 After a water cannon salute, it was time for me to take care of some interviews and a press conference led by the CEO of Biman Kevin Steele. He is a fascinating and genuinely awesome guy! The fact that he would wear a T-shirt to support the last flight, rather than the suit his wife begged him to wear, says a lot about how important the DC-10 is to him. 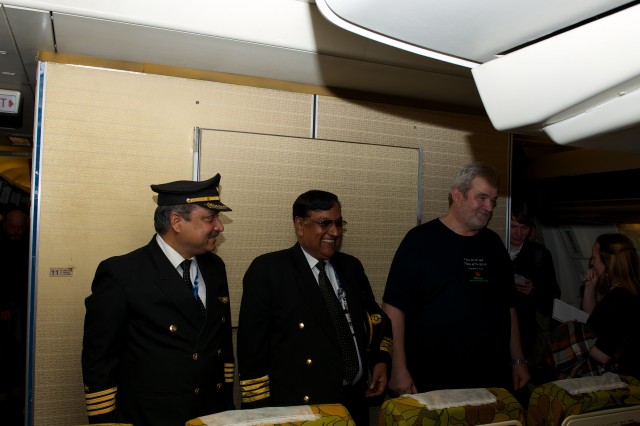 What a great spot for a press conference! Photo: Bernie Leighton | AirlineReporter

It was there that I learned that on a per-seat basis, the 77W is 35% more efficient. Insane, really.

What a lot of you are probably wondering about is “why BHX”? Why is BHX the future for Biman’s international expansion?

Firstly, fifth rights are not an option out of London airports. Any of them. Secondly, Birmingham is working on constructing a proper transit facility to assist Biman passengers heading across the Atlantic from Dhaka (where most of the North American Bangladeshi is from). Â Recall earlier how Bangladesh is FAA Cat-II in terms of safety? Well the reason that DAC-BHX-JFK has not gone on sale yet is exactly that.

Biman is aware of this issue and are working with obtaining a category one crew to fly their 777-300ERs all the way from Dhaka to New York. Biman also envisions service to Canada, but understands that even with significant O&D numbers in Toronto, the Canadian government cannot be convinced as no Air Canada partner flies to Dhaka.

With the opening of the runway extension at BHX, Biman opens both a new era for itself and the West Midlands. They will be the first tenant airline to make good use of it.

Will I miss the DC-10? You bet. I like diverse skies with diverse liveries. The DC-10’s end is just another stepping stone into the endless world of identical twins.

https://www.airlinereporter.com
VIDEO: How Does a Small Plane Pick Up an Ad Banner?
IMAGES: Qatar Airways Unveils its New Airbus A380 First Class
7 Comments

Great read Bernie and well done. I so regret not booking a seat on that last flight. Kudos to you for doing so.

Enjoyed this report, Bernie, mich thanks. I spent countless hours on United Airlines DC-10s back in the 1970s and ’80s between the U.S. West and East coasts, and a few flights to Europe.

What will be the ultimate fate of S2-ACR? If the Scotland-BHX flight was the last passenger flight, does that mean S2-ACR will be scrapped in the UK? Or a non-pax ferry flight back to Bangladesh or a third country for scrapping?

Yeah, back to DAC for scrapping. It was ferried back with a few crew. It was supposed to go to Bruntingthorpe- but they cannot remove the engines.

Ah, thanks. It would have been lovely to have it at Bruntingthorpe Museum as a static display.

Amazing final to the trilogy! Thanks for sharing Bernie, I for one will miss the D10.

So the big question isâ€¦will any of ACR’s parts end up on eBay? I’m sure some geeks will buy ’em!

It makes me sad to see such a wonderful jetliner from a bygone era disappear from the skies. They are still used by FEDEX though so it can’t be too bad. It’s a real tear jerker to see all the World War 2, Cold War, and Vintage Airliners sit in a airplane junk yard. I remember when I was a little girl and found out Concorde was out of service. I was crying. That was back in 2009 or 2010, years after, but I didn’t know about Concorde until then.