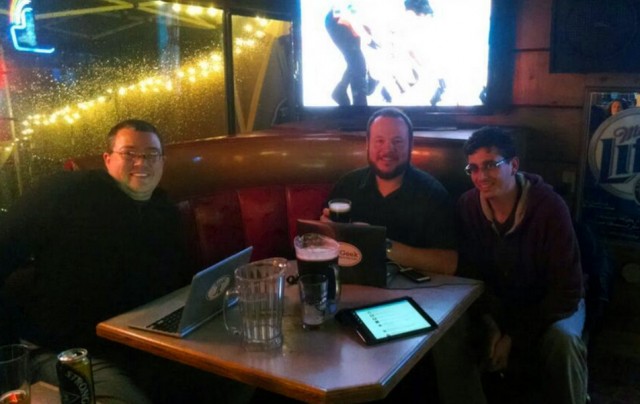 Ben, Jason, and I sit in the corner at the Cozy Inn in Kenmore, with the Olympics playing the background

The first step before we posted or tweeted anything was to verify that this might be real. We could see that the aircraft had squawked 7500, which means a hijacking, but it could be a mistake.

We started to write up the story with the information we had, while continuing to seek confirmation via social media. We even used the old-school telephone, calling contacts in Ethiopia.

Looking online, we saw no one else talking about this other than John Walton (aka @thatjohn), a friend and aviation journalist and Director of Data at flight ratings, data and search site Routehappy. AlthoughÂ John was not covering the story as a formal media outlet, I knew he was good with gathering information and seeing him sharing details made me feel confident this was most likely real.

I gave us the green light to move forward with the story, but made sure to keep the tone of “this is a possibility.” The story was published via our website and we shared it on our social media channels. Â This all probably took about five minutes from first word to hitting “publish.”

In very short time, I had transformed from tired, beer drinking #AvGeek to full-on story-making machine. Jason and Ben were more looking up things for personal interest, while the three AirlineReporter staffers became a well-oiled machine.

Since things were happening so quickly, our little corner in the bar became a temporary newsroom. Yes, we got lots of weird looks, but what are you going to do? Â Plus, it’s Seattle…

John had already started the #ET702 hashtag and we used it as well. Within 15 minutes or so of the first tweet, things started going crazy. We couldn’t even keep up with the hashtag anymore, and mentions/re-tweets for us were speeding up as well.

Once things started to settle down, after the co-pilot was arrested, and there was no more major information being released, I started thinking about how the dynamics of social media has changed things. It allows people to get information out there very quickly, but it also permits for bad information to be released as well.

I am by no means blaming how other media works. First off, there are many more checks and verification steps that most need to go through, which is good. I can sit in a bar with a beer and say, “yes,” and that’s it. Also, we have set up very specialized contacts around the world and are able to verify things that are specific to aviation, so we can move quickly. We have amazing readers (yea, you guys) who know when something happens anywhere in the world, and will email/tweet us, which can start us with a story that no one else has.Â

John also pointed out to me that it was late in the U.S. (we are west-coast based so still awake) on a Sunday when the Olympics are going down and it was President’s Day weekend. It was also very early in Europe and it just proved bad timing for a world news story to break. Also, not to mention (no insult to them), but you kind of have to be a big aviation nerd, like Bernie and John, to catch a story like this.

Good legacy media is also going to try to formulate a thorough story better than a fast one. Even looking at our story, we still have it in bullet point format. Sure, we could spend the time and rewrite it in a narrative format, but by the time we do that, there are already hundreds of those stories on the internet – I like to keep almost a “historical look” at how the story developed. If people were to choose at this point reading our story or a good traditional media outlet, they will probably choose the legacy media and I am okay with that.

Since I know John quite well, we had a discussion of how this all went down after the fact, and I think he had some really great ideas about how to break a story like this the right way. Almost a “How to Write a Proper Breaking Story,” sort of thing, and not just for media people, but even for individuals who get special information and want to create a story. These are all directly from John:

I think showing your sources is one of the most important things. As we were developing this story we would see information/photos, and I was requiring that everything had to be backed up with where it was from before we would use it. Once you build a trust on Twitter, then you become a source yourself. As in, I already trusted John, I saw he was tweeting things that I could verify, so when I saw that he had something that we did not, I shared it without having to further verify.

We have been able to build similar relationships with media outlets around the world. When we were being mentioned on Twitter and on stories as the source, people felt confident in doing that. I have to admit that it is very humbling to know that we have gotten to a place of that much trust in this industry.

One big aspect of all this was luck for us; luck. Timing that three of us on the AirlineReporter team were able to work on stories (we all have jobs/lives outside of the site), that I happened to be with two other great AvGeeks (who both live in New York and likely would have been asleep if not in Seattle) and it was not in the middle of the night. Blaine and I were even just chatting this morning before publishing this story that if this event would have happened last night (Monday), there would have only been one person able to cover, if we would have been able to cover it at all.

So what do you think?Â I am writing this story to try and get some of your thoughts about media and how airline stories are covered. How it has changed and how will the next big story be covered?

Traditional media is no longer the way I receive the majority of my news. Social media has been amazing recently in getting details to the consumer faster, albeit, sometimes inaccurate information does seep through. I think the way you delivered the story (as an editor myself) was extremely responsible and very fast– two of the most important qualities in journalism. Covering the airline industry in interesting in that things change faster than stocks. Which makes it quite fun. The future news stories will be told in the way you told this story; it won’t be coming from traditional media outlets, rather from niche experts using social media. Oh, and thanks for this story. I don’t think I hit refresh more than on your site that night. Cheers xx