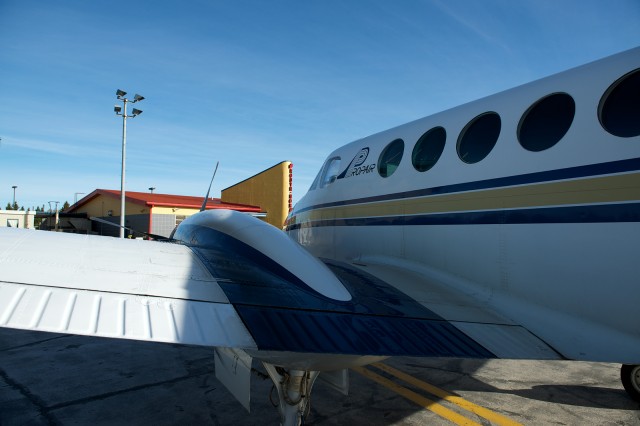 One boards a King Air from a set of internal airstairs on the aircraft’s left side. C-FWRM, the King Air A100 I was on, had eight seats. Usually a King Air seats about five. In the words of Tuco Salamanca, seat pitch was “TIGHT! Tight tight tight!” So tight, in fact, I could barely get my knees into the seat. I could fit one knee at a time, not both (for what it’s worth, I’m just under 6′ tall). I allowed my other leg free reign over the aisle. 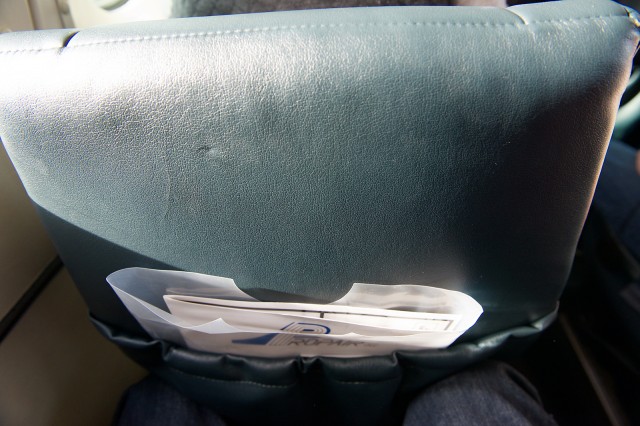 The tight pitch of an eight-seat King Air A100 – Photo: Bernie Leighton | AirlineReporter.com

Even more odd, rather than window shades, the King Air that I was on had adjustable circular polarizers instead. It gave all my wing shots a strange 1970’s “instagram” vibe. Â It also looked extremely weird, as I refused to take off my sunglasses; despite the photo-ruining shades, there was quite a lot of glare inside. 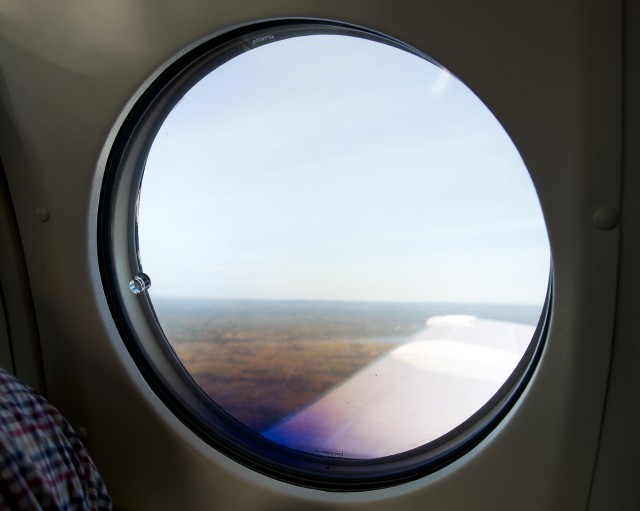 Once the copilot was on board and the door was shut, start up commenced. It was bizarrely quiet and the closest analogy I can muster is a central vacuum system. It was going to be a quiet flight to Earlton. So hushed, in fact, that I barely noticed the second engine starting. 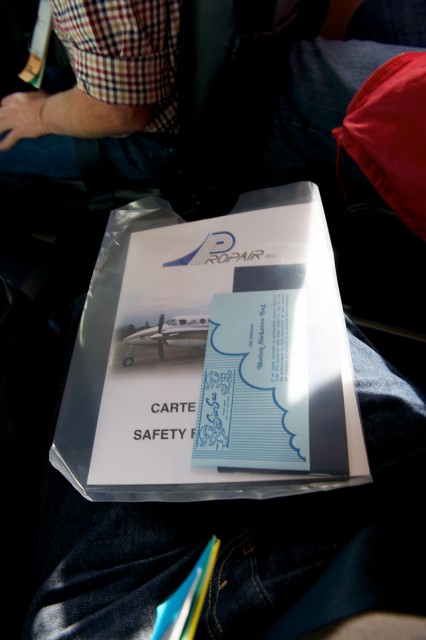 Departure out of Rouyn was delayed by the landing of a mining company’s Challenger 604. It did provide more time to get a feeling of the aircraft whilst holding short.

Takeoff was actually rather strange. The aircraft felt as if it was skidding to the left as the power was applied. The brakes were definitely creaking whilst both engines settled at the same RPM and it was safe to take off.

The King Air is an extremely stable aircraft. At ~4500 feet ASL and under VFR rules (with a good deal of convection and a low pressure system on the way) it was bouncy, but in control. It is a “stiffer” ride than one would expect from an executive turboprop – I wonder if the engineers designing it wanted the passengers to feel like they were in a flying Porsche. The movements were very precise and germanic.

Approach into Earlton was not something most passengers in this day and age can experience. The flight deck is open, and therefore its windows were visible from my seat. Almost every passenger aboard, therefore, was scrambling to get unobstructed photographs or video. 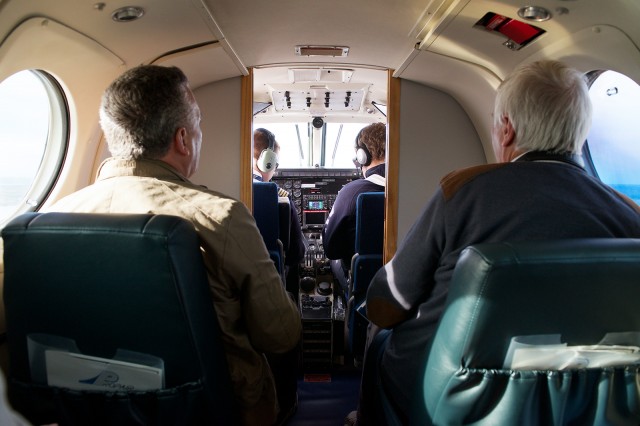 The cabin and flight deck view of a Beech King Air A100 – Photo: Bernie Leighton | AirlineReporter.com

A touch-and-go at Earlton gave a great demonstration of Propair’s pilot skill — I barely felt it. Again, however, on takeoff there was that strange rightward correction immediately after power application.

On the return to Rouyn-Naranda, we were able to fly even lower. I also concluded that the polarizing filters were probably necessary, due to the aircraft’s white finish and high-latitude summer flying. Don’t want to blind the passengers.

Pilots love the King Air in the Canadian north. The PT6A engines are not direct drive – other competing engines are. Direct-drive engines often lack any sort of turbine and cowl protection; allowing them to ingest FOD (aka debris), freezing rain, really anything and everything you can probably think of. Some pilots consider this expensive and dangerous. Others love the King Air because the PT6A’s lack of direct drive also means the turbine RPM is not controlling the propellers- making it quieter.

I respect the opinions of the pilots and can understand that if you spend eight hours a day on the flight deck, a constant high-pitched whine (that noise-canceling headsets can barely deal with) would slowly drive you insane. As I’m not a commercial pilot, though, give the PT6A water inject or something to act as a temporary volume increase for the AvGeek in me.

If I were a mining engineer or a C-level executive at a growing firm, I’d want a King Air. It looks great, I can see how it’d be very comfortable in an executive configuration, and I could easily have a conversation during cruise.

I am none of those things. Â Then again, I think my ideal aircraft is probably the Tu-95. So if they ever make a general aviation version of that, count me in!

Bernie,
The rightward correction you describe sounds very much like compensation needed to overcome the props’ p-factor (see http://en.wikipedia.org/wiki/P-factor#Effects). Since the King’s propellers are not I’m guessing counter-rotating, then P-factor would be an issue.

What I would really love to find is a Tu-116. It was used as a substitute for the Tu-114 before they were officially entered into service. They had a small pax cabin where the bomb bay was. I think one is parked up in Ulyanovsk, but not sure where the other is. I know the VVS used them as VIP transports for a while.

Although you did not mention it in your article, the predecessor to the King Air was the Queen Air, which was an unpressurized twin with the same fuselage as the original A-90. Beech has stretched the orginal design several times since production began.

That’s because I always forget the female royalty of the Beech line. Duchesses and Queen airs are my permanent mental blank. You are right, and I am sorry. It was a great aircraft, I just- totally forget if they are real at times.

Made to measure window blinds for your doors and windows. We manufacure blinds for Patio, Conservatory, Folding and Sliding doors.