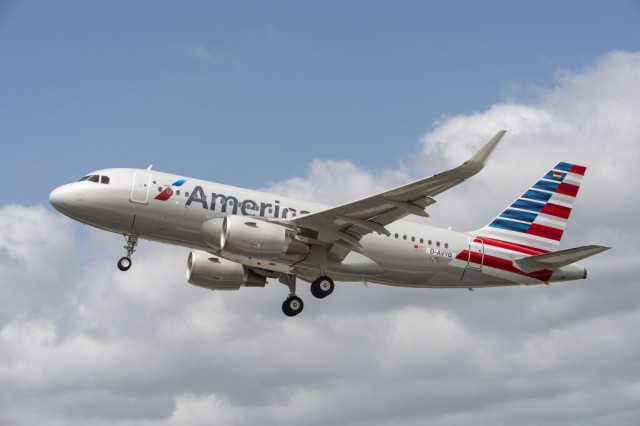 AAâ€™s first Airbus A319 departs from Hamburg on its delivery flight. All of Americanâ€™s A319s will be delivered with the new sharklets. Image: American Airlines

Reported from Fort Worth by: Jack Harty, Senior Correspondent Archive.com and re-printed with permission.

The â€œNew Americanâ€ is arriving along with a new aircraft almost every week. With each delivery, American is slowly introducing a brand-new onboard product that first debuted on their Boeing 777-300ERs and continues to make its way into the fleet with the delivery of their first A319 aircraft. In February, American Airlines and US Airways announced plans to merge which would help form the â€œNew American.â€

However, the Department of Justice filed a motion to stop the merger last week, citing that competition would be decreased. At this time, it’s not clear if a merger with US Airways will be part of the â€œNew Americanâ€, though many in the industry feel that the merger will happen after AA agrees to concessions, such as surrendering significant slots at Washington Reagan National Airport.

At a minimum, the merger closing will be pushed back from the 3rd to 4th quarter of 2013. Even if American and US Airways do not complete their merger, it is evident that American Airlines is going through a transformation as they build the â€œNew American.â€

On August 14th, American Airlines unveiled their first A319 in the United States to employees and press; we were invited. 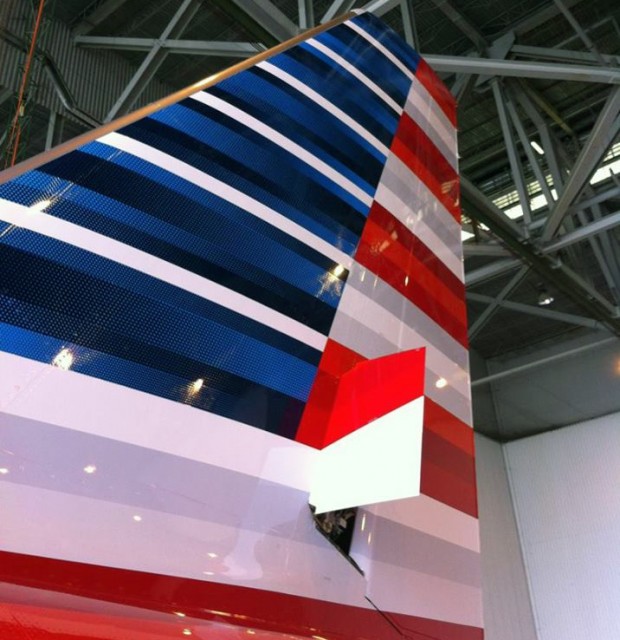 Not everyone is a fan of AA’s new paint job. Here you can see the detail of the tail. Image: Jack Harty/Airchive.com.

Since American took delivery of their first Boeing 777 in 1999, the Airbus A319 became the first completely brand new aircraft type American has taken delivery of in more than fourteen years. Their first A319 was delivered on July 23, and it was ferried to Dallas-Fort Worth (DFW) via Bangor, Maine the following day. Once the A319 arrived at DFW, engineers, onboard product personnel, the FAA, mechanics, and many others have been working hard to get the aircraft ready for its first passenger flight on September 16. Airchive will be onboard the inaugural flight between DFW and Charlotte.

American Airlines placed a large order for hundreds of narrow body aircraft in July 2012 to replace its aging fleet. The Airbus A319 was ordered to directly replace their ancient, yet iconic, McDonnell Douglas Douglas Super 80 aircraft. The A321 was ordered to replace their aging Boeing 757-200 and 767-200 aircraft. The Airbus A320 was not part of the specification as the 737-800 fits this mission in the fleet. If the US/AA merger happens, American will instantly become the worldâ€™s largest operator of the Airbus A320 family.

About 26 months prior the first A319 delivery, the 24-member American Airlines Onboard Product Team began designing the interiors for their new aircraft. As Brady Byrnes, the Manager of Design for American Airlinesâ€™ Onboard Products said, â€œ[American] wanted it to be straightforward, clean, and simple. But, [American] wanted it to be sophisticated and modern at the same time.â€ Americanâ€™s A319s boast leather seats, inflight Wi-Fi, in-seat entertainment, and universal power outlets at every seat. 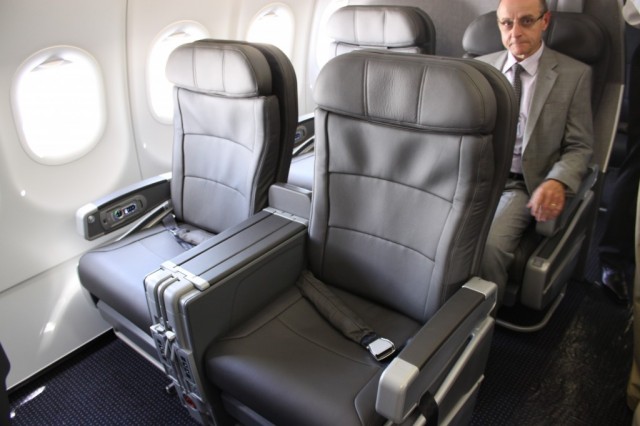 There are 8 leather First Class seats manufactured by Weber in a 2-2 configuration. The entertainment system boasts 200 movies, up to 180 TV programs, more than 350 audio selections, and 15 games. Coming later this year, customers will have the ability to chat with passengers in other seats. The screen is a 12.1 inch HD-capable touchscreen. A remote is also located in the seat rest. All portions of the Thales TopSeries entertainment system are complimentary in First Class, except the GoGo in-flight wi-fi.

There are 24 Main Cabin Extra seats and 96 Main Cabin seats, all in a 3-3 configuration. Â In a press release, American says that the seat bottoms will produce an â€œinnovative cradling motion to better distribute weight while increasing the recline angle of the seatback.â€ Each seat is equipped with one universal AC power outlet and a USB jack. The screens in the Main Cabin are an 8.9 inch HD-capable touchscreen. However, the entire entertainment system is not free. Customers will have the option to view complimentary content, pay-to-access packages, or pay-per-view movies. 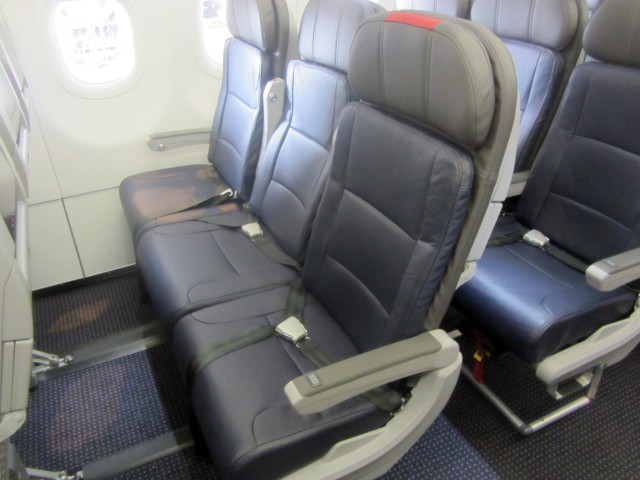 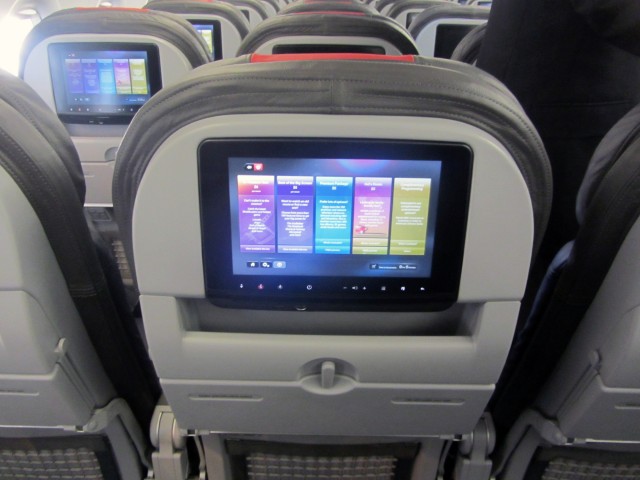 An American Airlines A320 family full-motion simulator is the last stop in pilot training before flying the real aircraft. Image: Jack Harty/Airchive.com

A little more than 14 months before taking delivery of the first A319 aircraft, Captain Mark Maestas, Americanâ€™s Airbus Fleet Captain, began to review Airbusâ€™ flight manuals to customize them for Americanâ€™s pilots. He worked with check airmen, Airbus, and the FAA to ensure that they were completely compliant with all the rules and regulations. John Lohmar, Americanâ€™s Airbus Fleet Training Manager, developed an extensive program to train pilots to transition to the A319. Approximately 40 pilots are qualified to fly Americanâ€™s new Airbus aircraft each month. After completing training, pilots will be able to fly the A319 and A321 interchangeably. When asked how flying the MD-80 is compared to flying the A319, Captain Lohmar said, â€œIt is like getting a 2013 vehicle to replace your 1988 vehicle.â€

For flight attendants, they have the option of taking a four-day training class to become certified to fly the Airbus aircraft. They need to be trained to operate the doors, the cabin computer management system, and other emergency procedures before working a flight with passengers. American has already held a few training classes for flight attendants. 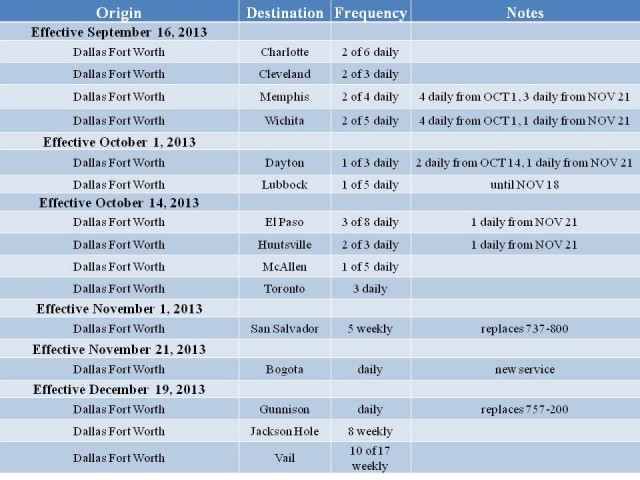 Routes that the AA Airbus A319 will soon fly

American Airlines still has to complete the FAA certification process to fly passengers before the inaugural flight on September 16 from Dallas-Fort Worth to Charlotte. American will also begin A319 service to Cleveland, Memphis, and Wichita from DFW on September 16. American has taken delivery of 3 A319s and will have 6 by the entry-into-service date. Other markets such as Bogota, Dayton, Los Angeles, and McAllen will begin later this year.

With the hundred-or-so Fort Worth-based American Airline employees attending the unveiling, it was evident that they were proud of the new onboard product. Some employees said it was â€œsleekâ€ and â€œlovely.â€ Many were speechless, but everybody wanted to take their photos in front of the new Silverbird.

Moral: unless you are Executive Platinum you can forget about ever upgrading on one of these, and even then upgrades will be few and far between. Gold? That will be completely useless.

After reading this public relations marketing piece, my inference is that the new level of in-flight service will inspire you to swipe your Black Amex to pay for the privilege of parking your bum in the pointy end of the aircraft. The new AA strategy is to have a premium cabin that only requires one flight attendant in the front, as opposed to the two required in current aircraft. I wouldn’t hesitate to pay if the staff looked like retired Olympic gymnasts, bathrooms were cleaned during flight – as most international carriers do- and the menu was designed by a James Beard culinary award recipient. Otherwise, what justifies the added expense?

The story was looking at the new A319. It wouldn’t make much sense to talk about the service issues that are plaguing the airline. However, in our AA Boeing 777-300ER (https://www.airlinereporter.com/2013/05/my-review-flying-business-class-on-american-airlines-777-300er/), we gave great kudos to the new product and talked about the issues with service.

It seems that AA is moving in a better direction with the product, but still need to help motivate employees to allow the service to match.

Really horrid paint job. That has to go. Looks like a nice little airplane though.