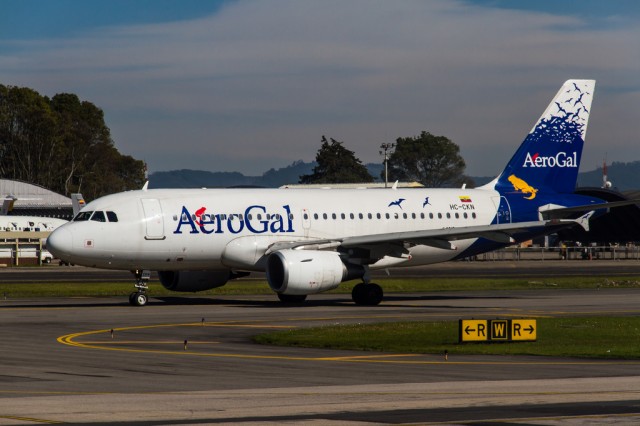 I first spotted this livery on a bird sitting at Jet Midwest in Kansas City, MO. From afar it looked like the tail paint was either peeling or there was something more ominous going on. As I got closer I noticed the yellowish orange area at the bottom of the vertical stabilizer and assumed there was further paint damage, as if perhaps a base coat had been exposed. Only after I exited the highway and took a closer look did I realize the unique and sort of odd design of AeroGal’s livery.

The tail begins solid purple and slowly progresses upwards to show a flock of what could easily be mistaken as bats in flight. It would be reasonable to assume that these are bats since Ecuador, which is where AeroGal is headquartered, is home to an incredibly diverse and large bat population.

It turns out that the flying creatures on this tail are actually Magnificent Frigatebirds. As for that yellowish orange blotch? Not a blotch at all, it’s an Iguana. Both the Frigatebird and Iguana are found in abundance on the Ecuadorian Galapagos Islands.

AeroGal has managed to take a boring industry-standard paint job and doctor it just enough to drum up curiosity and excitement for their own brand, as well as about one of their countries most prized jewels.

The hat tips to the Galapagos don’t stop at the tail, you’ll notice Frigatebirds along the fuselage and the airline’s name in large billboard-type lettering complete with another Iguana, this one being red.

So in the case of AeroGal I’ll stand corrected, this livery is an excellent sample of branding not only for the airline but for their home country, a true win-win.

This Boeing 767 was manufactured in 1992 and delivered to United Airlines where it stayed in service for over a decade. After changing hands with a number of carriers including Avianca (a majority holder of AeroGal) it was sold to Jet Midwest.

The plane was in Missouri for just a few months before, according to the FAA, it was exported to Thailand.

AeroGal is an Ecuadorian airline that began operations in August of 1986 with just two Dornier DO-28-D2 12 passenger planes. They now have a fleet of 6 Airbus 319s, 3 Airbus A320s and one Boeing 767. The airline is owned by Avianca Holdings.

According to their social responsibility statement, they are committed to issues of preservation and conservation of the ecosystem of the Galapagos Islands as well as the promotion of Ecuadorian tourism.

Don’t forget the red iguana perched on the ‘e’ on the fuselage titles.
This scheme looked great on the ex-BN 727-227 that I flew on in 2007.
Too bad there’s no giant tortoise on it!