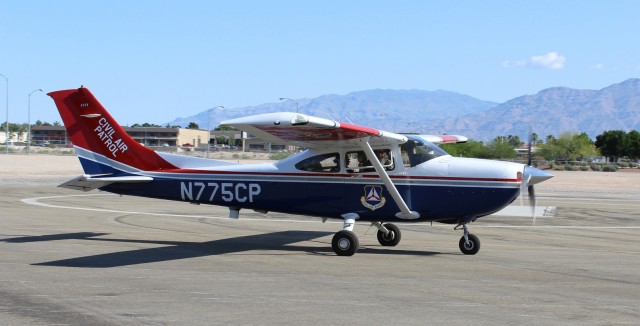 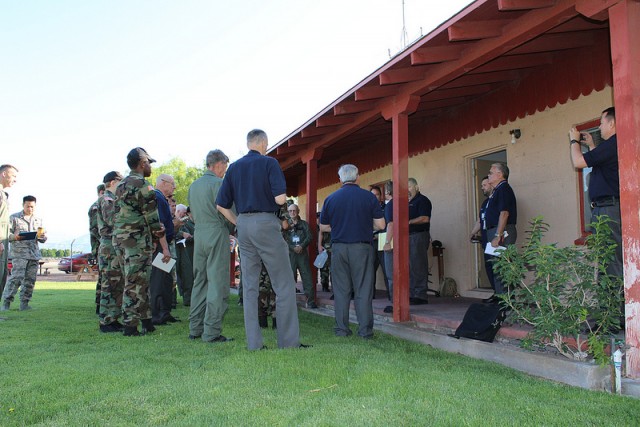 On the morning I was there, it started with a military-like briefing involving all of Nevada’s CAP units participating. Safety officers described the flying conditions and the hazards flight crews may encounter; Weather officers describe the beautiful 80 degree weather and light winds; and the incident commander took the lead and described the missions that they will be responding too. The three missions involve two missing aircraft and a reported explosion in Northern Nevada.

At the North Las Vegas airport flight crews utilize a specially outfitted Cessna 182 and 206. Both are equipped with G-1000s and Bendix King radios making it easier to communicate with ground units to find downed aircraft, missing hikers or whatever else crews are tasked with.

CAP operates the largest fleet of single-engine aircraft in the nation with a fleet of 550 airplanes. These include more than 110 aircraft with Garmin glass-cockpits, Gippsland Airvans with high-tech imaging systems, and digital emergency radio direction finder equipment. 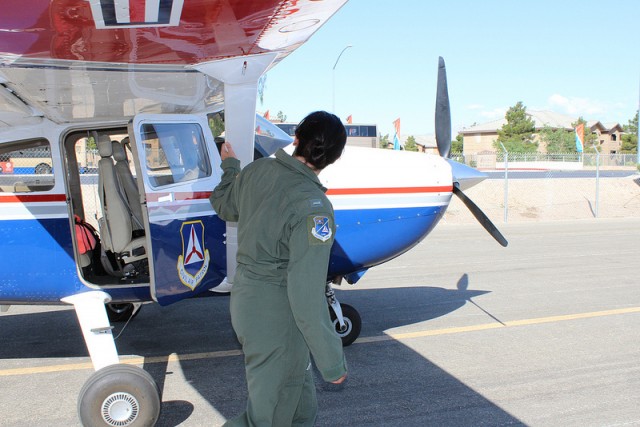 The flight crews are made up of a pilot and one or two observers. The observers assist the pilot with checklists and gauge checks while also trying to spot the target of their respective mission.

On the ground, young adults in the cadet program are dressed in their camouflage uniforms, just as the Air Force would and stand ready to respond to any emergency. Since this is a real life training scenario, only a few know what to expect, leaving the rest in the dark about where they’ll be sent.

’œA lot of people don’t know [the Civil Air Patrol] exists,’ 19-Year-Old Cadet Lt. Col. Bert Kirk said. He stated that many people think they are kids who wear Air Force uniforms, but it is much more than that.  Cadets receive much of the same emergency training that firefighters and police officers get. Kirk is graduating from Rancho High School and will attend the University of Nevada, Las Vegas. He is planning to one day become an Air Force pilot. 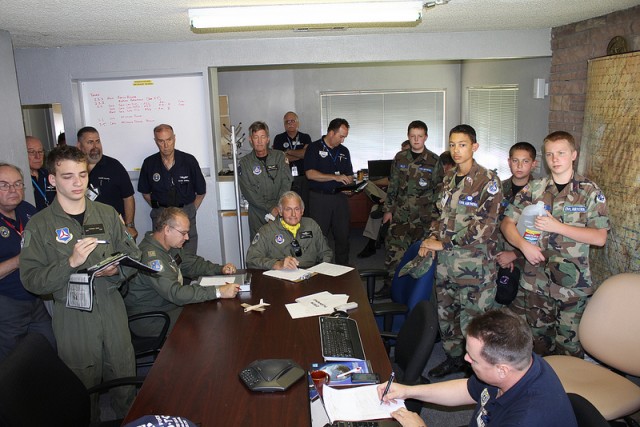 Preparing for the day. Photo by Dan Landson.

For adults, CAP allows them to give back to communities where they live. This mission’s Incident Commander, Major Carol Lynn, wanted to find some type of search and rescue operation involving dogs and her research led her to CAP.

The complex planning and organizing of the week-long mission is an example of the types of missions the Civil Air Patrol is dispatched to everyday across the country. Lynn explained, ’œFrom the moment a call comes in, the CAP has a goal of getting a plane in the air within an hour.” Lynn’s team leadership paid off. The Air Force awarded an ’œExcellence’ rating for their response to the multi-state training mission.

Some of the more prevalent CAP missions were the search for adventurer Steve Fossett, whose remains and crashed airplane were found in Northern California months after he never returned from a flight in 2008. The CAP also assisted in the Gulf Oil Spill by photographing the movement of oil on a daily basis.

Most recently the Nevada wing carried out a two missions in the northern part of the state. The first mission led to the successful rescue of three people who were involved in plane crash. The second mission helped search and rescue teams locate another missing plane. Unfortunately, no one survived that crash.

The CAP conducts nearly all of the Air Force’s search and rescue missions within the continental United States. Most of all 61,000 members are volunteers who care about their community and their country and each year they help to save an average of 80 to 100 lives.

Great program. I got my solo wings when I was 15 years old through CAP in WA State. What I learned during that week of flight training quite literally enabled me years later to get through Navy Flight School.

In addition, several sub-divisions of our very own USAF pay virtually off of the bills. Although there are others, USAF directly owns and indirectly maintains a significant portion of CAP aircraft. Those aircraft owners who allow their aircraft to be (regularly) used for CAP activities are **generously** reimbursed for related fuel, insurance, maintenance and other CAP-related costs, and to the point that is very often a fly or no-fly choice for some owners. Directly, indirectly or on a qualified reimbursement basis, CAP, as sponsored by USAF, provide a huge amount of first and second-level flight instruction in the U.S. Senior teen and very young adults CAN receive the majority of the ground schooling and, as I understand it, most of their PPL flight training via CAP and at little or no cost to the individual. That said, once a ‘junior’ CAP member – thing high school senior or a tad older, starts taking in-flight instruction, in most cases they also begin acquiring some very serious personal obligations. Many of those kids would love nothing better than to become ‘real,’ USAF Flight Officers. What the kids often do not realize is that they still have four+ years of college education ahead of them. If they do not complete that – or do not do ‘well enough,’ CAP headquarters and or the USAF and or the US Treasury Deportment will come looking for them and expect full reimbursement, at cost plus, for every tenth of an hour spend in flight training, and often without regard for the kid’s motivation, known potential limitations of his/her parent’s ability to pay. CAP and or USAF has a long history of washing its hands of such things, saying it a “Treasury Issue,” while recruiting the next wholly unqualified kid in line. I have to wonder if sixteen and seventeen your old kids who just joined a ‘club,’ have the moxy to understand to of the obligations that CAP and USAF tried to impose upon them.
Without a doubt, CAP does some great and wonderful, often high-level S&R activities. Those pilots and the aircraft that they fly, have little or no overlap with CAP’s Cadet Corps (which is not unlike many 17 and 18 YO kids in the Boy Scouts program and who have a huge streak of ‘wanna be.” This is not an entirely bad thing, but some of those kids (and their parents) have been seriously misled.
Perhaps another time, we should take a seriously close look at the adult population of CAP. Without doubt, the majority of CAP’s active adult membership belong and participate for all of the right reasons and none of the wrong ones. Sadly, the number of adults who participate for other than charitable purposes appears to be more than a bit too large. The screening of adult members often stops at prior military rank – and exactly where it should become more intense: For that former military flying officer who wants to fly for CAP, perhaps CAP and USAF ought to take a closer look at *exactly* why he or she is not still on active duty – or Honorably retired. With no suggestion that the adult flying officers are unfit, CAP ought to take a much closer look at their personal motivation for Flying Officer Status. In this day, there is a lot of extremely relevant stuff that never quite makes it onto paper. Are those the ‘leaders’ that we want guiding our maturing children – or flying USAF-owned airplanes? The only thing that I’m prepared to suggest is that we should take a thorough, second look at the adult membership and probably re-vet at least 95% of them. When the TSA finds is necessary to void my bag for a 10cc overage of mouthwash, they and others should also be taking an even closer look at civilians allowed to fly military-owned aircraft.
That’s just a rhetorical opener. Who really flies these airplanes (did I read 5,500 of them?) and why? What is their personal motivation for doing so? Is this inquiry intrusive? Of course it is! That said, when we entrust a government-owned airplane to a civilian, I think we have the right to ask, “Why do you you want to fly this airplane?” Other possible points, but this should warm up the discussion plate. Lastly, don;t even start: I do not dislike CAP; I have great respect for CAP and most of their operations. I also think CAP should be subject to a LOT more monitoring of purpose and function than is currently the case. What do you think. And yes, Mr. Landson, an excellent guest post! Blast, bless or benign, I stay tuned.d

Cook, sorry, but you do not know what you are talking about. CAP does not offer any flight instruction as a course of the regular Cadet Program and in no way requires any military service from the youth that participate. There are opportunities for some flight instruction for cadets that attend the summer Flight Academy, but the cost of the academy is paid by the cadet, not the government. Also, at one time CAP members were allowed to use their own aircraft and then be reimbursed but no longer. All aircraft used are “corporate owned”. All adult members are fingerprinted and undergo an FBI background check. You seem to think that all former military must have an “issue” if they are no longer serving. That is ridiculous. I would stack up the CAP personal and financial accountability of members agains any organization out there. As a congressionally chartered, non-profit organization that does recieve taxpayer money, CAP is required to be responsible. The CAP annual report to congress is available on-line as our financial statements. I am not sure where you get your information, but you are far off the mark.