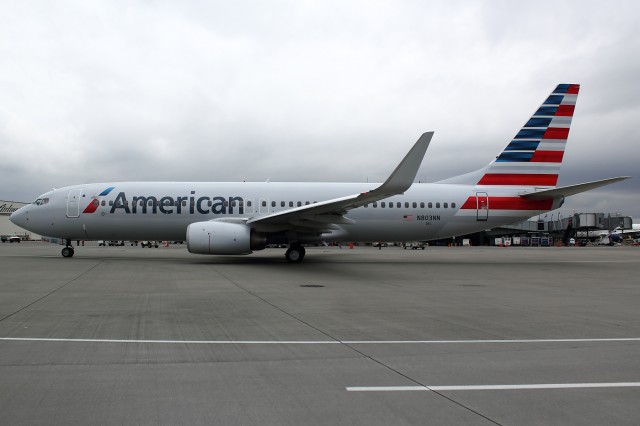 I recently had the chance to see up close and personal the New American Airlines scheme when it arrived to Seattle-Tacoma International Airport (SEA) for the first time, and have to say, pictures do not do it justice. Previously I was quoted on AirlineReporter.com saying that the new design was,’œFugly.” You could say I was not a huge fan.

Seeing it person really makes a huge difference. The logo stands out on the front of the plane and reaches back just before the emergency exit. Then we get to the tail, from a distance it is not the sharpest looking thing in the world but up close American Airlines seems to have hit a home run with it. Though it looks like as one person described, drawn via a crayon, it is artistic looking compared to what has become the dull Red and Blue AA that has graced the tail for far too many years.

I have seen quite a few people say that the design will not stand out among the gray sky. Obviously, SEA is known for its gray sky and during the 737’s visit, it was surely gray, but the tail stood out. I couldn’t imagine what it will look like on a sunny day. 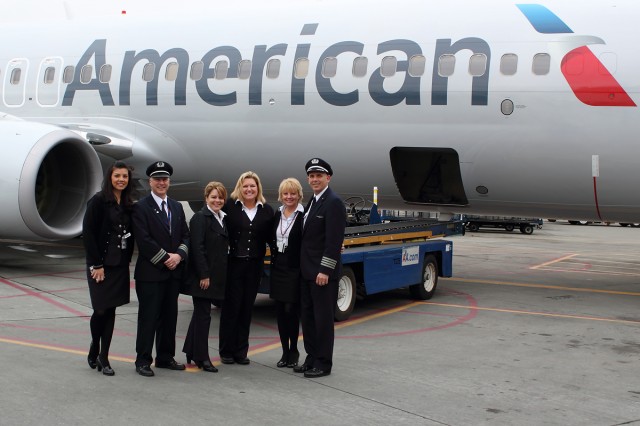 The American flight crew stopped to pose in front of the new American livery. Photo by Brandon Farris.

Everyone who was at SEA, from passengers flying through, to airport ground agents along with the TSA and FAA all seemed to make their way to the gate that it was parked at to take a sneak peak at the new scheme.

Many people working on the flight for American seemed to take a moment and bask in the new identity and even stopped for pictures. I also have to note that this was the happiest AA crew that I have ever seen and kinda wish more had their chipper personality (maybe this is truly the “new” American?).

Now with the merger coming on to the horizon, I for one, have to say that I cannot wait to see this new scheme on the A330 and think that it’ll be one of the best looking planes out there. Next thing we wanna see though is that tail on an MD-80.

If you have been able to see the new livery in person — has it changed your opinion?

“I recently had the chance to see up close and personal the New American Airlines scheme when it arrived to Seattle-Tacoma International Airport (SEA) for the first time, and have to say, pictures do not do it justice.”

And that’s the problem, you have to get closer to it too (maybe) change your opinion about it. Anytime something has to qualified like that, then usually it’s not good. And this livery is not good. As an employee of AA, I feel the livery should be inspirational and aspirational. Just like the livery it replaces. However, it fails at both. It just plays follow the leader with Delta, United and everyone else that has no imagination forward of the tail.

I can’t believe anyone has to defend this or like or dislike – it is what it is and, its a mistake. I’m a former designer that would shot presenting this idea to a client that had a 80 year heritage airline and brand! the Eagle looks like a vestigal appendix or tailbone – now useless but still hanging on. The flag a garish, complicated paint job that clashes with a boring American type and sash with ‘eagle’ combo. However, it I were merging with US Air – this might work as a mess and melange of the the two carriers combined. An American flag doesn’t say much about the quality and brand of airlines I’ll fly – the Eagle speaks to more. What a grand miss and mess. Now I’m still willing to look and ‘work on it!’ as a LIKE!!

I’ve loved it from the first time I saw it. The old AA block letters with that funky scissors eagle were too rigid and long outlived their useful life. Although I miss the shiny polished unpainted fuselage, the old livery was just… old. The new branding is modern and moves the company forward which is exactly what it needs. But, like many have said, it cant be just lipstick on a pig. Hopefully there will be real change going on inside the plane as well.

Completely concur. Also, your observation that the previous AA Eagle resembled “funky scissors” is both humorous and true.

As a flyer who believes Hawaiian Airlines to have the most beautiful and alluring livery design, I love the new American Airlines livery.

American Airline planes will certainly be easily, and distinctively, identifiable up-close and from afar; especially as more, and more, of the flying public becomes familiar with American’s attractive new livery.

When one views this airline on the ground or in the sky, there is no question – this is American Airlines.

You are so spot on about Hawaiian’s stunning livery. Its the best.
And also good points about the new American livery.
Although the company has a long heritage and significance in history. The past 12 years have been turbulent and this provides a clean break, clearly looking forward.
I remember so many times over the years watching other airlines come out with redesigned liveries that were fresh, modern and unique. I often wondered wonder why on earth AA stuck to the same tired scheme.
Finally the day has come.

I would like to see keep original AA logo and unpainted fuselage.

This paint job has one huge problem that AA will eventually come to realize – it is called COST. Delta orginally after its bankruptcy went with a very complicated tail which was very costly to paint and maintain. That was very short lived as they relized their mistake and then with the merger with Northwest, went back to the transition paint job between the very old 1970s Delta paint and the new costly tail, just adding a red Delta symbol to that “temporary” paint job which is now permanent. American’s paint job not only has a relatively complicated tail to paint and maintain, they for the first time in a very long time paint the whole body white. Now while this is a cost the other airlines accept, it is the first time American is going to increase the cost of operating the aircraft. Why does it cost more? Because that white paint is not weightless. It actually weights thousands of pounds reducing lift capacity and makes the engines work harder even with an empty aircraft. It seems silly to me to take on these costs for a white fusilage and a complicated tail, but we will see if American keeps it once the new CEO Parket takes control. He may dump it for all I know.

Except that Parkit currently paints the fuselages on his own airline.

Aircraft livery exist for many reasons.

For American Airlines, it’s a new beginning, a new branding, a new logo and symbol of their airline – and as MarcDG previously posted, one hopes that American Airlines is able to change and move their company positively forward, both inside and out.

Your point, supported by Boeing, is something thats never been brought up before so thank you for sharing. Perhaps along that reasoning is the fact that the planes have a greenish protective coating while in assembly, which is then washed off just before paint is applied.

As I said before, a paint job does not change a toxic culture of borrible customer service. As far as the livery is concerned, it looks like a new entrant into the airline business, what I mean is; it looks like new Low Cost Carrier just entered the rate race of the airline business. Where are the beautiful bold double A’s? I am guessing their intent is to rid themselves of the horrible image they’ve managed to build for themselves.
They are being thrown a life line by Parker’s US Airways, It’d be wise for AA not to blow it.

Well, Parker will be running AA, so I guess its up to him not to “blow it”

Thanks for sharing. I had seen that site before. I also have seen from internal memos at American the following (paraphrased to protect the innocent):

Polishing, even multiple times a year, is much cheaper than repainting even relatively small portions of an airframe. Corrosion control involves mostly inspections and these are done faster and cheaper on bare metal than on painted metal. A complete 777 polish job is done in less than one maintenance shift.

Bottomline: AA used to state that bare metal is better, other airlines will tell you painting is better [most paint their planes], and manufacturers will say it doesn’t matter [they sell to both of the above, and is substantiated by the article that is shared. Take your pick. I tend to believe what AA used to state internally before they decided recently to paint their planes.

Either viewpoint can be substantiated as unfortunately as we all know, statistics can be manipulated. Boeing supports both as they want to sell aircraft – exactly as that link states. That tail is going to spell trouble for their costs in painting the planes. Although it is simpiler than the old one Delta briefly used, there are a lot of colors and stripes which make it pretty – and harder to maintain to look nice. It will be interesting to see how long the tail lasts. The rest of the paint job – I don’t see any cost issues there.

Bring BACK the SHINE!!!!! Reminds me of Air Texas….30+ years ago. Had a big STAR & stripes? on it’s tail…..I NOW love my companies new livery with Continentals paint N Globe. Never saw that coming.

Saw the new scheme on N776AN on approach to Heathrow over Windsor yesterday and it looked much more striking than an earlier 767 in the old scheme. Stood out much more against the rapidly changing English sky (alternate grey clouds and showers and sunshine!) Like a previous comment, i often wondered why they had had the old AA on the tail for so long!
well done American, much more modern!