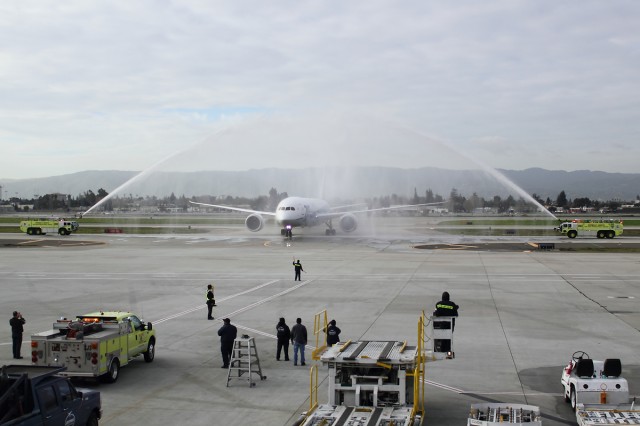 Although there has been recent bad news regarding the Boeing 787 Dreamliner, we are happy to share some good news: Japan-based All Nippon Airlines (ANA) expanded its route network with its first arrival into Silicon Valley’s own Mineta San Jose International Airport (SJC) on Friday January 11, 2013.

The flight, ANA 1076, landed nearly an hour early into SJC and pushed back on-time with no issues. When asked about the recent issues facing the 787, ANA Chairmen of the Board Yoji Ohashi stated, ’œWe can not give you an official comment, but we are confident about the safety of the Dreamliner.’

’œWe are confident that passenger demand will remain high between SJC and Japan, as well as other Asian cities, with Tokyo as the gateway into Asia. Reservations for the route are already showing great demand and we are excited that customers will enjoy ANA’s utmost service with Japanese hospitality on our innovative Dreamliner,’ shared ANA president and CEO Shinichiro Ito in a statement from Tokyo. 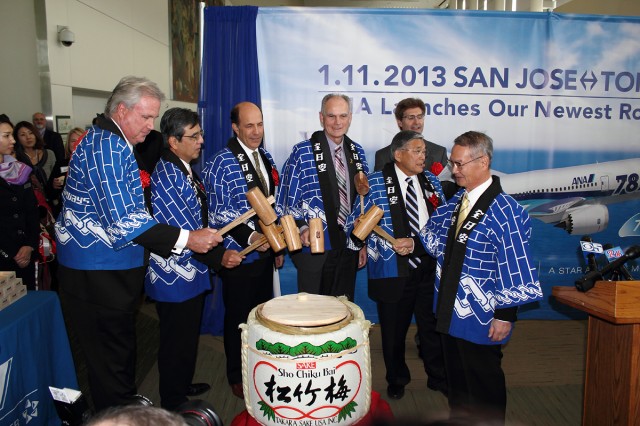 ’œWe are pleased to launch ANA’s new direct service between Tokyo and SJC today,’ Mayor Chuck Reed said. ’œWeather on business or visiting friends and family, Silicon Valley residents will find that ANA’s new flights offer a convenient connection to Japan and the Pacific Rim. I thank ANA for their investment in SJC.’

The new service even allowed Mayor Reed to take a shot at its partner airport SFO, ’œYou can fly out of one of the best on-time airports in the country over an airport with one of the worst on-time records.’

AirlineReporter.com managed to get a passenger’s account of the flight to Narita from SJC. Alan Tsuda was nice enough to send us a report on his experience, ’œIn economy, it was the most comfortable full plane experience I’ve ever had. Quite spacious, usually, I take an aisle seat, but this time had an interior seat. The center has four seats with a small gap in the middle, which gives the interior passengers just enough more room to make a difference. I did not notice the lighting to be dramatically different, but it was pleasant.” 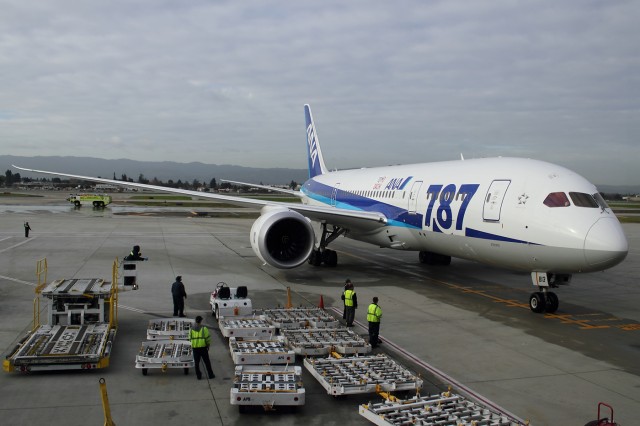 Tsuda continued, “The spaciousness of the cabin makes it feel much more open, less of a cave feeling. Definitely noticed that I needed less hydration, so I suppose there was more humidity in cabin. I can’t be sure, but I felt that the noise (I was behind the wings) was slightly less than in the 747 that I took for the next leg of my trip. Subjectively I heard less low end rumble. I would definitely recommend the plane and ANA from SJC to NRT.’

https://www.airlinereporter.com
Some Airport Changes Are Coming to St. Maarten
Is This Boeing 737-800 Prepped for American Airline’s New Livery?
9 Comments

I’m delighted to see/hear/learn that ANA if now flying from SJC.
I take minor issue with labeling the 787’s issues as bad news; These events all seem to be within the range of expected teething problems for a very new model/type airplane. Boeing and the operators are ON TOP of this and with close supervision from the FAA. We’ll note that the FAA has NOT grounded the 787 and is not likely to do so. “Bad News” is just not the right term. I would fly on a 787, operated by any of the current operators and without a second thought.

There’s a terrific report from the first SJC-NRT on ANA, with great pictures, on the BAT:

Proud to have the 787 at my nearest major airport, as well as this being the first 787 service in the Bay Area. Hope to see it there someday and maybe someday even fly on the 787 en route to the Philippines via Tokyo. Nice report!

And….. all the 787 ANA flights are cancelled due to an emergency landing again caused by a battery fire or failure. 5 or 6 incidents in 2 weeks is absolutely unacceptable. If I was the CEO of ANA, I would be very, very pissed!

as the saying goes LOOK BEFORE YOU LEAP

Not entirely true that this is the first 787 to serve the San Francisco area. UA ran revenue flights between SFO-IAH over a couple of weeks. This is, however, the first regularly scheduled 787 flight from the Bay Area.

As for Mayor Reed’s comment , “You can fly out of one of the best on-time airports in the country over an airport with one of the worst on-time records.”. If SJC had 1000 + flights per day and 41 million paxs annually, they too would have an issue with on-time arrivals/departures.

— And then stops them. Grounded. I sure hope they get the bugs resolved quickly.

@bigbenaugust – sadly depending on how long the grounding is for, SJC will be the one most likely effected the hardest. But the flight is not canceled, it will continue once ANA brings its 787’s back into service.