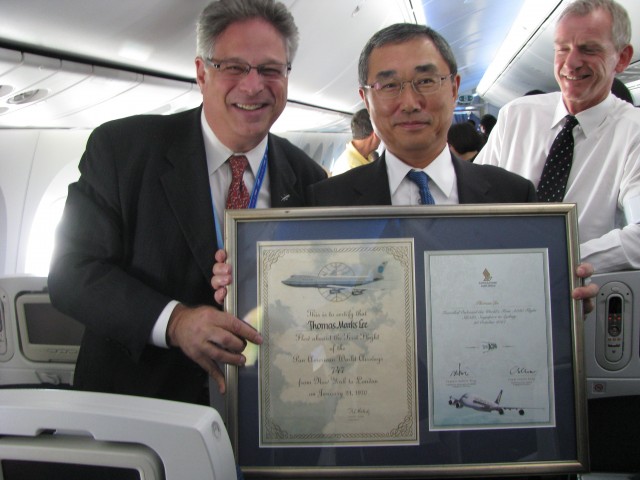 Thomas Lee with Mr. Shinichiro Ito, the CEO of All Nippon Airways, while flying the inaugural 787 flight. Photo from Thomas Lee.

AirlineReporter.com (AR): Who is Thomas Lee?
Thomas Lee (TL): I am a 60 year old businessman, originally from New York, who earned my Engineering degree from Tulane University and now reside in Orange County, California. I am married to Sally Glenn-Lee, who was President of the first class of flight attendants at Southwest Airlines and has worked her entire career in the airline industry, currently with jetBlue. I am father to Briana Lee, a 28 year old nurse and grandfather of Tatiana, an adorable 3 year old. I am Director of Marketing and Innovation in the Galleys and Equipment Segment of Zodiac Aerospace, a $4B entity with 26,000 employees globally. Every day, I work on developing the aircraft passenger cabin of the future and proudly have dozens of patents.

AR: What is the allure of going on the inaugural flight of an aircraft?
TL: It is terribly exciting to be amongst the very first passengers to board a brand new aircraft type and experience the magic of flight in the latest aircraft technologies. One can decide for oneself whether new innovations have improved air travel. The atmosphere on these flights is electrifying. Aviation enthusiasts from around the world, airline management and the media all converge to join in the festive nature of each new aircraft launch. It is simply exhilarating.

AR: What has been your favorite inaugural flight?
TL: My favorite would have to be the very first inaugural flight, that B747 in 1970. This was the first twin-aisle aircraft, so it was simply overwhelming boarding this behemoth when all past flight experiences had been on narrow body, single aisle planes. And it was no ordinary flight. After boarding the aircraft, every seat was filled and we taxied out for take-off. At nearly full take off speeds, there was a flame-out in engine #3 and the captain had to jam on the brakes aborting the take-off. The plane was rolled back to the gate.

Pan Am had fortunately received a second 747 just the day before from Boeing. It was parked in the hangar and was a completely green airplane with no preparation work done to get it ready for passenger service. To waste as much time as possible, Pan Am arranged for 5 extremely large Greyhound buses to pick us up at Kennedy Airport and take us to an Italian restaurant that they had completely taken over. We had a full sit-down dinner there and a long party waiting for that second aircraft to be prepped for flight.

By the time we got back to Kennedy Airport and boarded the second plane, so much time had elapsed that the first aircraft would have already landed in London. At least 30 passengers refused to board the aircraft, fearing something horrible would happen.

Another memorable part of that flight was that they didn’t have time in the rush to prepare the plane to transfer all the catering carts and equipment. So, the flight attendants laid out a buffet in the galley and we all lined up in the passenger aisles to make our way through the galley and pick up plates of food. What an amazing night.

By the way, that second plane was ’œClipper Victor’ which seven years later was involved in the worst aircraft accident in history. A KLM 747 at full take off speed, while trying to get airborne crashed into Pan Am’s Clipper Victor in Tenerife.

AR: All together, about how many miles have you flown?
TL: I would estimate that I have flown about 7.3 million miles in my life.

AR: When normally flying, what is your favorite aircraft type?
TL: I have been partial to the Boeing 777 aircraft from its inception. This was the first large commercial plane ever developed entirely on computers. The interior space feels great; the way it flies is extremely comfortable, etc. There has never been a fatal accident on a B777 which attests to its amazing design and engineering.

AR: What is your favorite airline?
TL: There are many great airlines in the world. Each creates its own brand based on that airlines ’œpersonality,’ which is driven by their culture, style of service, menus, etc. It would be impossible to pick one and say it is the best. 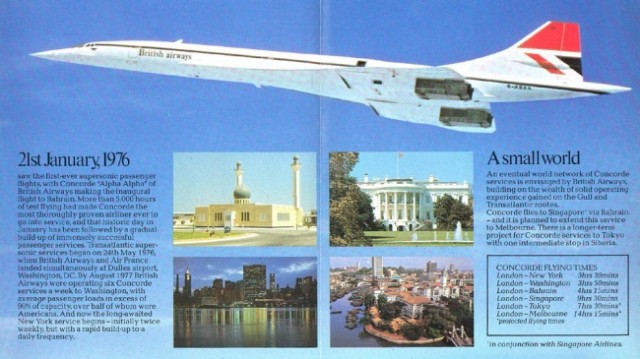 AR: What is the inaugural flight you missed and wish you made?
TL: The Concorde as this was the first supersonic passenger aircraft. I was privileged to fly the Concorde three times and found it fantastic to look out the window at 60,000 feet and see the blackness of space above and the curvature of the earth below.

So what is it…Victor Clipper or Clipper Victor? Somethings not right.

Just a swap in the image. It is Clipper Victor.