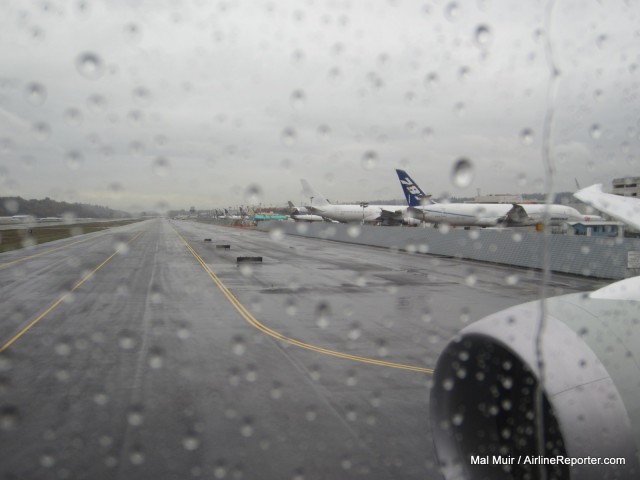 It was not surprising that it was raining in Seattle as Qatar’s first 787 left Boeing Field. Photo by Mal Muir / AirlineReporter.com.

It’s grey outside, rain clouds threaten and there is a chill in the air (substantial for this Aussie implant to the USA) to warrant a scarf.  I don my properly-themed Boeing scarf and head out into the morning air of this Seattle fall day.  The weather cannot dampen my mood, nothing (apart from an inherent lack of coffee) can do that right now. I am about to hitch a ride on a 787 Dreamliner.

Tuesday the 13th of November 2012 is the day that Qatar Airways made their first 787 delivery flight.  As we departed downtown for Boeing Field (BFI) we were all excited and restless. Our departure was delayed and this was making some people antsy, but our arrival time to Doha, Qatar had not changed. 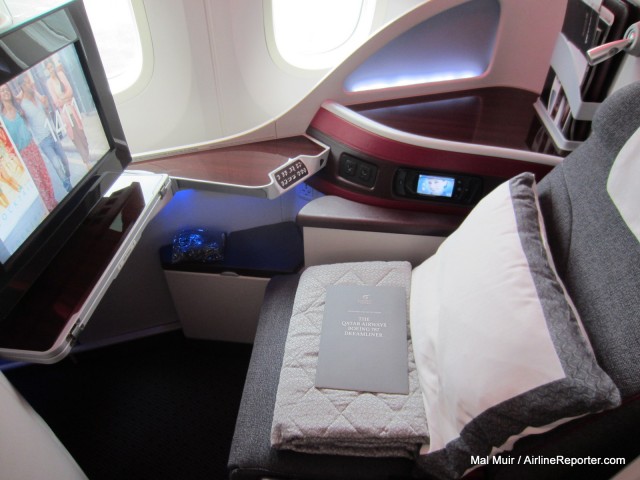 The flight ,QR3787, was to happen on-board A7-BCB, the first Qatar Airways 787. We were set to fly the approximately 7500 miles direct to Doha with only about 90 people on-board, including a mixture of Qatar Airways staff, Boeing staff, contractors (such as Thales, Recaro, OnAir and BE Aerospace) and invited guests & media (the category I fell under).

I was lucky enough to be assigned a Business Class seat (4K), but with only 22 premium seats up front, the remainder of the passengers had to sit in economy. Do not feel too bad for them, each got a full row to themselves and received Business Class level of service.

Although most non-737 delivery flights happen at Paine Field (in Everett), our flight was departing from Boeing Field, just south of downtown Seattle.  I assume this was done since LOT Polish Airlines was taking delivery of their first Dreamliner at Paine on the same day. 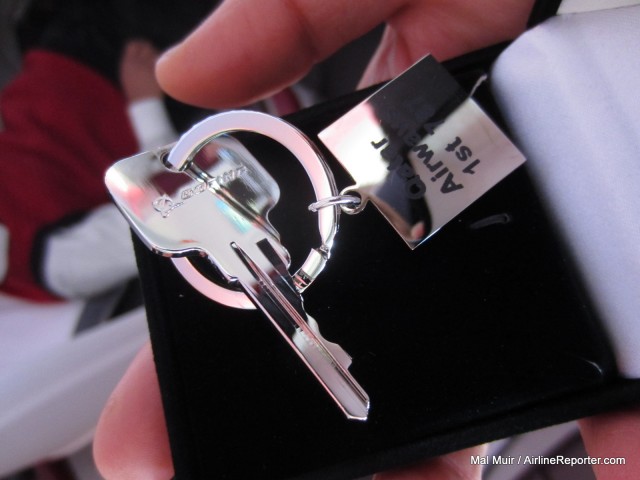 Before boarding, there was no big TSA-style security; although laptops and liquids could stay in, my belt and shoes could not. It was a quick and visually appealing drive along the Boeing Field ramp past rows of 737s before arriving at the 787.  As we approached the aircraft, the excitement got the better of me and I was stunned that I was about to set foot on-board my first 787 flight (although I had previously been on United’s 787). If my excitement wasn’t high enough already,  I was handed a souvenir key by Boeing staff at the bottom of the stairs, marking the delivery.

On-board was a mix of people taking photos, mingling with the staff and the crew and just starting to relax into what would be a fantastic journey.  I had a quick chat with the Captain in charge of the flight, and learned that the day would also mark the line check of the first Qatar Airways 787 pilot. Qatar and Boeing pilots would take turns at the controls of the plane and I was interested in knowing where the crew was planning to rest between shifts. 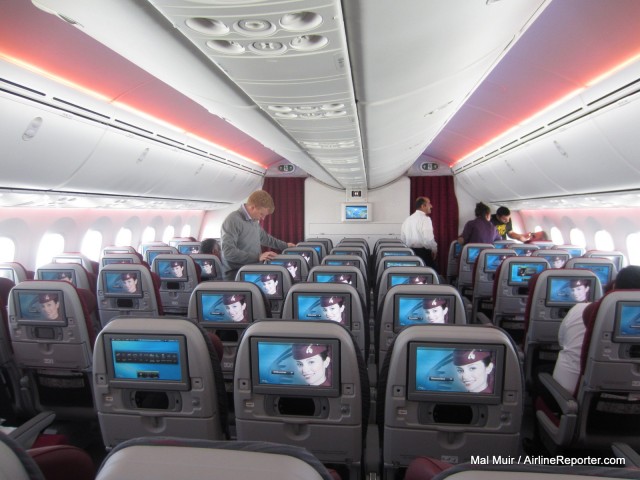 Even in a 9-abreast configuration, economy did not look too shabby. Although, I was happy I had a business class seat. Image: Mal Muri / AirlineReporter.com.

Qatar designed this variant of their 787s with mid haul flights in mind (flights of 5-7 hours) so there is no crew rest facilities on-board, which have been seen on other Dreamliners.  We were looking at a 12-14 hour flight ahead of us (ultra long haul), so how would they rest?  The Qatar Captain revealed that a portion of the Economy Cabin was set aside for the cabin crew and 2 business class seats had been set aside for the flight crew.

Soon enough, the door was closed, an announcement was made and we all had to take our seats. As we were about to push back from our parking bay, a United 787 pulled in right next to us as almost to wish us well on our journey.

We taxied to the end of 13R, the two GENx engines spooled up and we were on our way. The engines did not seem to have the force of the GE90, but they were much quieter and were able to easily get us off the ground.  Being airborne in the 787 for the first time was surreal. Seeing just how far that composite wing flexes once airborne was a little bit crazy, at one point it seemed it was higher than the aircraft itself. A true work of engineering art.

We climbed out towards the south before turning to track north and on our polar route towards the middle east. Soon the seat belt sign came off and we were free to roam the cabin. 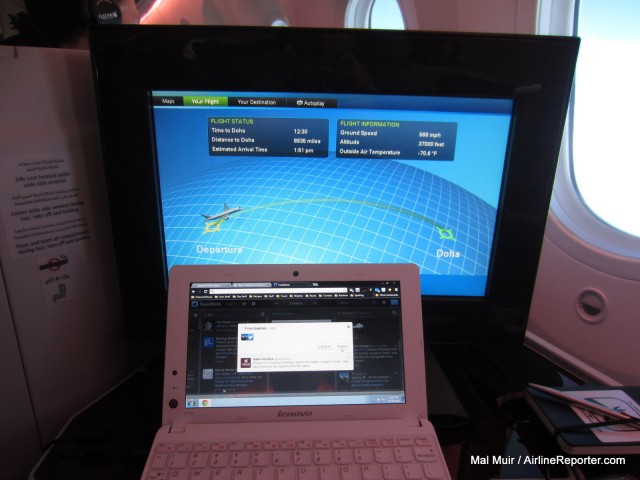 Qatar selected OnAir to provide on-board Wifi and GSM services on their new 787s.  Although a little slow to start (as I’m sure it was due to everyone hammering it at the same time to connect and be the first to say ’œI’m on-board’) the service was pretty consistent. One down fall is you couldn’t have more than one device connected to a single account at any time. This was probably more of an issue during a media event than it would be for a normally scheduled flight.

Without even realizing it, we were almost 90 minutes into the flight before the lunch service began, but to be honest, I had not even noticed.  This seemed to be the whole feeling on the flight; time moved quickly. 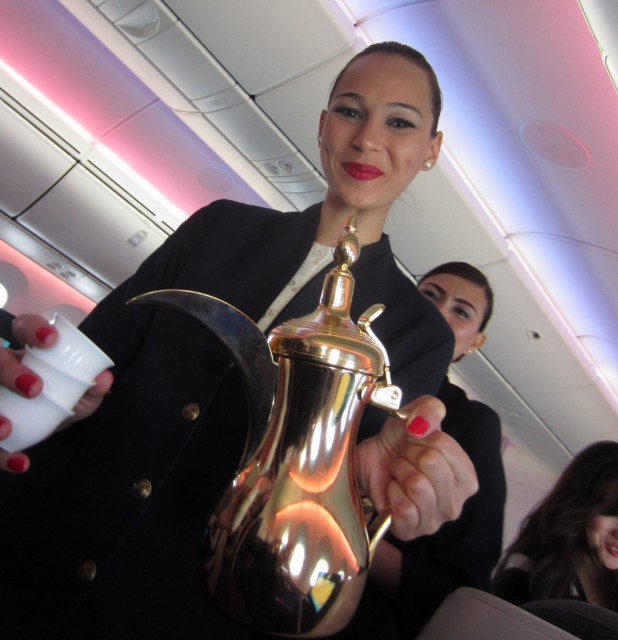 A successful airline is much more than just a seat and food. It is about the people. Image: Mal Muir / AirlineReporter.com.

The CEO of Qatar Airways, Akbar Al Baker, previously stated that, ’œBusiness Class is the new First Class.’ This was definitely true with amenities provided from Salvatore Ferragamo including slippers, an amenity kit (in a stylish pouch) and even pajamas.  This 5 star service (Qatar Airways continues to win many different awards) continued with the menu for lunch being a 5 course, individually plated affair of a mixture of traditional Arabic meals with a mixture of Western and Indian options.

The meal time was also the first chance I got to fully play with the new state of the art Thales IFE system.  Touted as cutting edge, this system had what was described as two screens at each seat.  The main screen in Business Class is a large 15’ LCD with the second screen being the remote itself. The system is android based so the remote is a touch panel and allows you to be able to navigate menus and edit playlists, all without interrupting the current selection that you have playing on the main screen.

It even had the ability to display a full moving map display on the remote while the main screen was playing a movie. That’s how I knew we were currently somewhere over Canada as I was watching The Dark Knight Rises while enjoying the 5 course meal’¦ that’s the way to fly right? 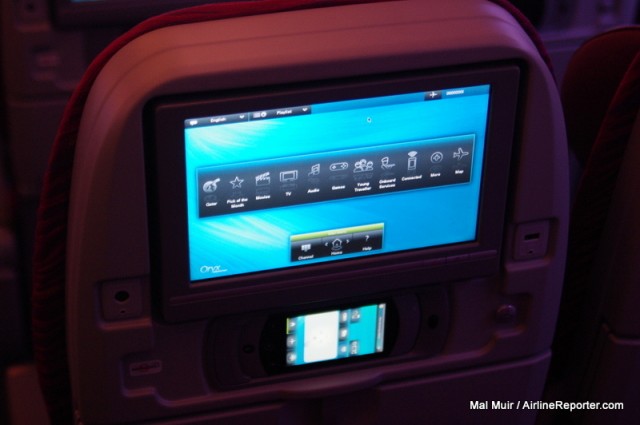 After the filling meal, most people started changing their seat into sleep mode and the crew blacked out all the cabin windows.  The cabin became very quiet now as it seemed to be a little bit more quieter compared to a 777 or 747, though not upper-deck on an A380 quiet. I was hoping to catch some sleep, but with all the distractions and excitement, I knew that might have been difficult.

Continue reading with PART 3 of this story…

Nice story and photos, Mal. Congrats on your trip as well.

Wow Mal! Its even better(well for me, sorry David), having an Aussie now write for this wonderful, insightful and very interesting website! What an amazing trip and I cant wait to read more! Cheers Mate!
Matt

I won’t take offense :). I actually have quite a few readers from Australia and that other country to the east of you. So it is nice to get a different perspective.

@Matthew Thanks Mate, good to see there is a fellow Aussie reading this blog! I thought it was just me 😉