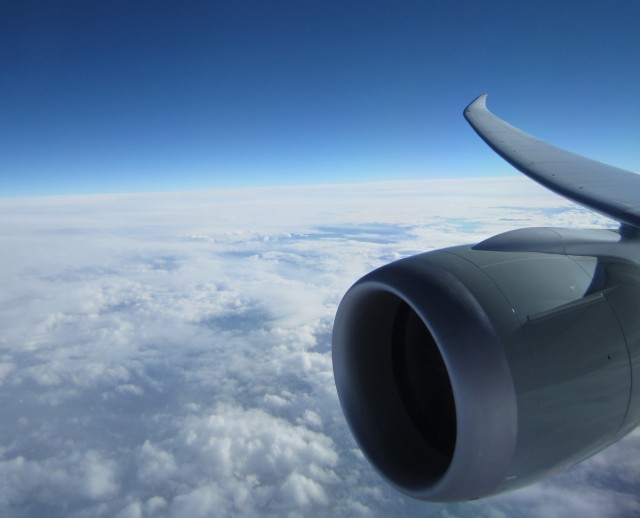 The wing is astounding on the Boeing 787 Dreamliner. Photo: Malcolm Muir / AirlineReporter.com.

This is the final installment of a multi-part (PART 1 & PART 2) series was written by AirlineReporter.com correspondent Mal Muir on the Qatar Airways Boeing 787 Dreamliner delivery flight (note: Qatar Airways covered Malcolm’s trip to Doha to cover this story).

With the flight now well and truly underway, most of the passengers on board were sleeping, but I remained not able to sleep. This is not because of the 787 Dreamliner; I have a history of not being able to sleep on aircraft. This meant that I had plenty of time to explore the plane, get in some work, have a chance to relax, and still fit in a few movies.

Having the on board Wi-Fi meant that I was able handle all of those emails I had been avoiding. For those on a business trip, Wi-Fi allows you to stay connected to the office and remain productive (maybe that is not always a good thing).  It also works out if you are a Twitter fanatic, so  you do not feel disconnected from the Twitterverse. 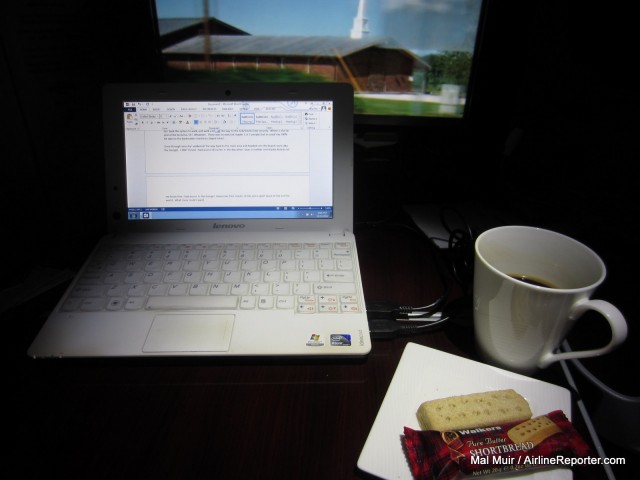 What is better than being on a Boeing 787 Dreamliner? Being able to tell all your friends via the internet while flying at 30,000 feet. Photo: Malcolm Muir / AirlineReporter.com.

The extra-large windows were a godsend for those in the back during the flight. As we passed over Iceland they managed to get 2.5 hours of uninterrupted viewing of the Northern Lights.  Unfortunately those of us up the front totally missed out since our windows were blacked out — I guess there are some benefits to flying economy.

When there was no outside light-show,  I was able to check out the economy section during flight and tested out the Recaro seats.  The Seats in the Economy Cabin were comfortable enough and would be fine for the medium length flights this Aircraft was fitted out for.  With a leather cover on the neck rest, they felt luxurious while not being to hard or uncomfortable, as some leather cushions can be.  I was also able to see the Social Media Command center set up as Qatar Airways was live tweeting their way across the globe. 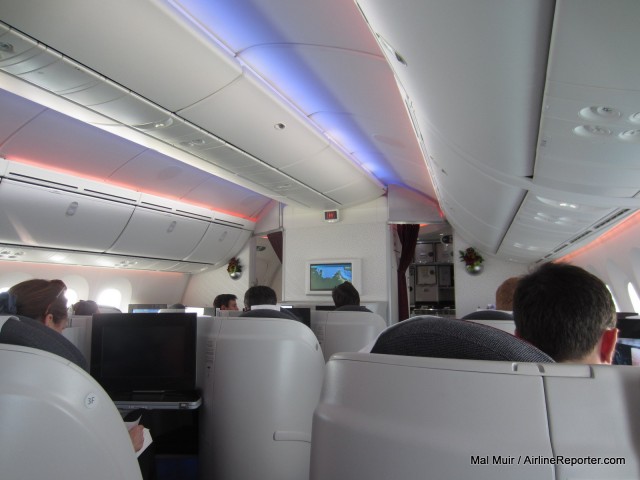 The business cabin is prepared to start our way into Doha after a long journey. Photo: Mal Muri / AirlineReporter.com.

Unfortunately I wasn’t able to get any face time with the CEO, Akbar Al Baker, who was on board our flight. He was able to take advantage of the comfy seats and slept most of his way to Doha. I have it say it was surreal seeing  the CEO of the airline in the Business Class PJ’s.

As we crossed over Eastern Europe, heading towards Turkey and the Middle East, passengers started to wake up and the cabin crew started serving breakfast with freshly made espresso (not that I hadn’t stopped eating — I had a midnight snack as well). 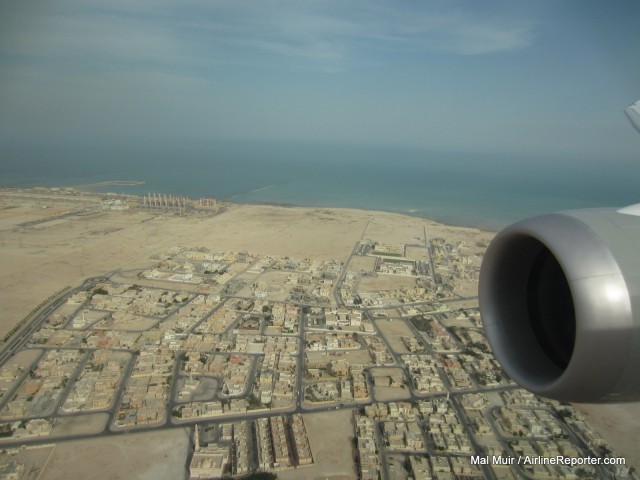 Flying over Doha — about to land. Photo: Mal Muir / AirlineReporter.com.

As we approached Doha, we prepared for our arrival. The flight was long, but many of us did not want the flight to end. Even though I got no sleep on the 14 hour flight, I felt oddly ready to go. It could have been the adrenaline and excitement, but could also have to do with the Dreamliner itself. The 787 has a new climate control system on board where the cabin is pressurized and humidified at a lower altitude, which allows you to feel more refreshed. I wasn’t fully able to appreciate the difference until my Boeing 777 flight home a few days later (I will be sharing a 787 vs 777 story later).

We started our descent into Doha and as the airport came into view, it was truly a sight to behold.  The blue waters of the Gulf, the yellow of the desert and just the small buildings and everything dotting the landscape.  It was unlike anything I had ever seen before — and I have seen quite a bit. 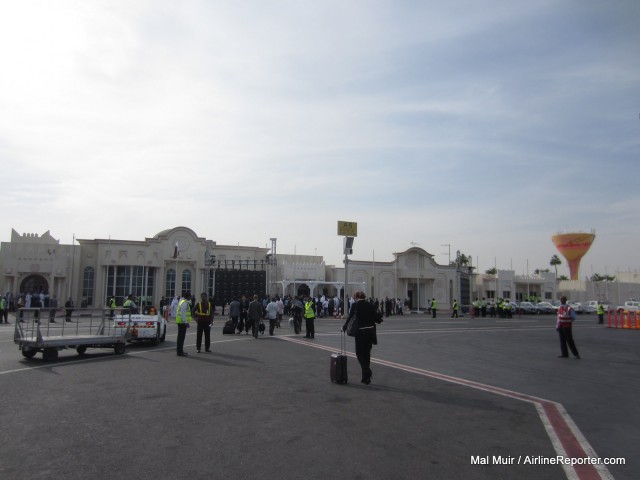 After we touched down at Doha International Airport we taxied towards the ministerial lounge (currently used for heads of state when they depart and the Amir of Qatar). The taxi ways and other areas of the airport were just full of Qatar Airways and other airport staff, all wanting to welcome the Dreamliner.

Even though we did not get a traditional water cannon salute on arrival, this was still a big deal with over 2 busloads of media waiting for us on arrival with big TV screens to show the aircraft landing.  As we disembarked and headed into the lounge area another press conference was underway by the CEO of the airline and the local representative for Boeing.

It was a long, yet fun journey to get to Doha. Photo: Mal Muir / AirlineReporter.com.

Once the press conference was over, the local media were given access to the aircraft while those of us on the flight, were bussed over to the arrivals terminal so that we could clear immigration, customs and get over to our hotel for the evening to get some sleep (at least for those of us who can not sleep well on planes).

The 787 flight was a once in a lifetime experience. It showcased that you can merge cutting edge technologies both in the on board experience and in the hardware of the aircraft itself to bring a truly magnificent piece of aircraft into the sky. I had a few days to explore Doha before my flight home and I look forward to share the rest of my adventures with Qatar Airways in the upcoming weeks. 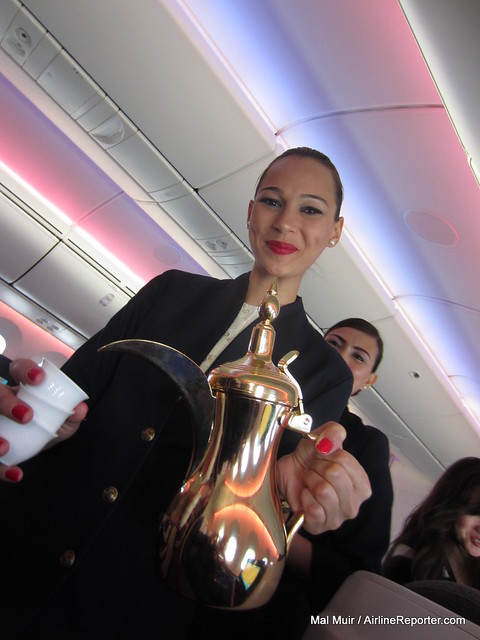 The average age of the QR 777 fleet wouldn’t be that old as they only started taking delivery 5 years ago. I have seen new 777’s rolling out of Everett still for these guys as well.