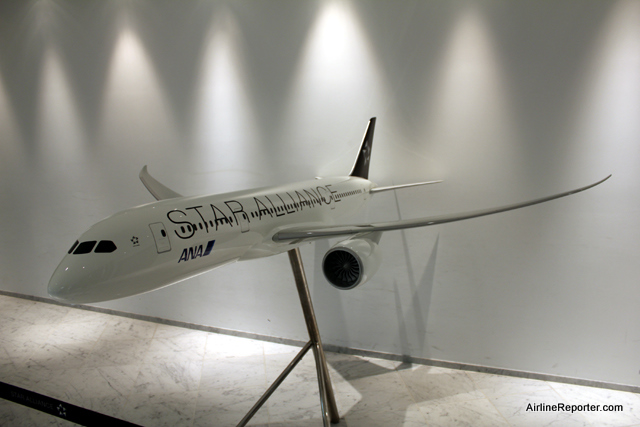 ANA has told AirlineReporter.com that they, “are not planning to use the Star Alliance livery for the 787s forÂ now.” That means we might have to wait a bit longer to see this on a bigger version.

As a (currently) infrequent flyer, I simply don’t get the whole aliance thing, and I definitly don’t understand why an airline would forgo their own livery for an alliance livery.

Frank,
Alliances allow a much more seamless experience for travelers. If I want to fly to TLS, United doesn’t have a way to get me there just flying on UA, so they can fly me to FRA and then LH can take me to TLS. The shared benefits across alliance members is also nice. When I flew US Air last week, I was among the first to board, got to checkin in the preferred line, and some other perks, because I was Star Gold, even though it was my first time ever flying US Airways. Oh, and I got EQMs and awards miles for the flights I took on US Air.
Can’t really comment on the reason for alliance liveries, but I think they generally are pretty cool.

Personally I think this scheme is modern, fresh, and complimentary to the aircraft. I’m actually one of those people who do pay attention to airline livery. Anybody have a connection at American Airlines? Now that they have big order in the offing, maybe they might consider a little image refresh.

Paris Air Show? Why did you not attend that event?

It would be a major coup for Star Alliance to have their scheme on the new 787 early. I bet they’ve been trying to sweet talk ANA into painting one. Think of the publicity they could get.