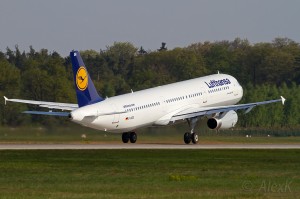 Last week, Lufthansa Airlines started flying an Airbus A321 (D-AIDG) on scheduled service from Hamburg to Frankfurt using a 50/50 mix of regular and biofuel on one of its engines and standard jet fuel in the other.

“The main focus of this test is to examine the effects of biofuel on the lifecycle of the engines and other operational issues,” Martin Riecken, Director Corporate Communications, The Americas explained to AirlineReporter.com. “Two of the main roadblocks are availability of biofuel on a larger scale and the price point. Right now, biofuel is about 60-70 percent more expensive than regular jetfuel.”

Christoph Franz, Chairman and CEO of the Lufthansa Group, said via a press release: ’œLufthansa is the first airline worldwide to use biofuel in scheduled daily flight operations. We are thus continuing to steadily implement our proven and successful strategy for sustainability.’

Hi I read your site everday and really enjoy it. But it’s not true, the engines do need to be modified, the bio will actually eat many types of the (rubber) seals in fuel system. And a 50/50 mix is to rich, and could gel or freeze. Boeing has been running 15% fuel to 85% jet-a

Thanks for reading. From Lufthansa’s press release they stated, “…since biokerosene has similar properties to those of conventional kerosene, it can be used for all aircraft types without any need for modifications to the aircraft or its engines.”

I am not sure with this type of fuel and the combination of the Airbus aircraft, that maybe it can be used without any modifications?