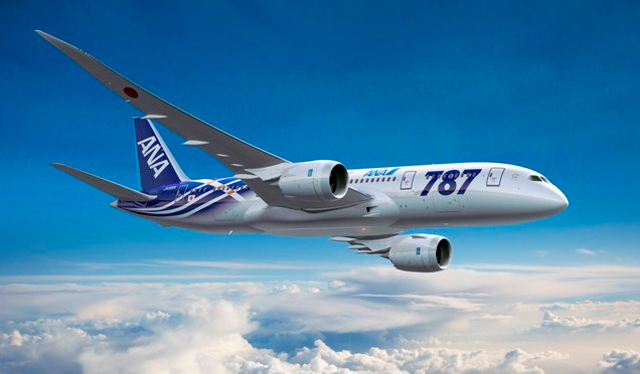 The livery is the celebrate that ANA will be the first airline in the world to fly the 787 Dreamliner. The blue lines at the rear of the fuselage are designed to highlight how the three core elements of the airlineâ€™s service brand – innovation, uniqueness and the inspiration of modern Japan â€“ operate across the ANA network. Only two Dreamliners will be painted in the special livery, the rest will be in standard ANA livery.

Many have assumed that ANA would create a special livery since two of their 787 Dreamliners parked at Paine Field have kept a blank livery. The above computer drawing is from Boeing, but ANA also released some images of what the livery will look like.

ANA also unveiled their new cabin layout that will premier on the 787 Dreamliner. Business Class seats will have full lay flat beds, 17″ monitors and staggered seating, allowing aisle access from every seat. For both long and short haul layouts in the 787 Dreamliner, there will be two classes: Business and Economy.

Economy class will feature seats that have fixed backs, where a passenger can recline, but it will not impede into the person’s space behind you. Every seat will have in seat entertainment and universal power and USB ports.

ANA has ordered 55 787 Dreamliners and the first should be delivered sometime in August or September.

Randy Tinseth, vice president, marketing for Boeing Commercial Airplanes, also has some additional renderings on the ANA Boeing 787 Dreamliner livery and the interior configuration posted to his blog.

I like it, except for the red boxes at the intersection … I think that makes it look a bit strange when the rest of the A/C is blue or white tones. IMO, it kind of looks cluttered with the repetition of the ANA logo on the fuselage. I think they should have moved the Dreamliner title under ‘787’ and delete the ANA logo and whatever the other logo is from the fuselage. Just my 2cents, though.

You have to imagine the number of people who have to agree on a special livery and all the meaning that goes behind it. Then add cultural differences between Japan and the US and I am happy it turned out so slick. Of course, we will have to see when it will be painted and you better believe I will be keeping an eye out at Paine Field for it to come out of the paint booth.

I relly like this special livery. It’s so blue! …and i love blue! 😉

This livery is complete overkill. Why not just put ‘787’ on the tail and enlarge the ANA logo on the fuselage.

The concept looks rushed and not very well thought out. Upon further study, it’s a rip from the new Airbus livery. https://www.airlinereporter.com/wp-content/uploads/2011/05/ACJbig.jpg

I think a basic Boeing-ANA hybrid livery would have been the way to go similar to what China Airlines has on their 747.

Looks nice and there’s no mistaking what model Boeing it is. Remember people, its just paint and can be redone when someone has another idea.

Wow Look very nice of 787 Dream Liner Any one have video of this news?