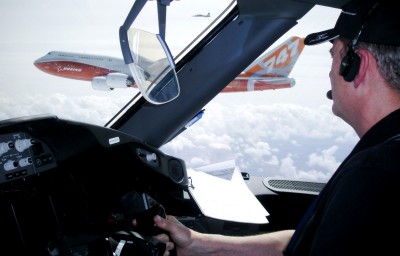 Randy Tinseth, vice president of marketing for Boeing Commercial Airplanes, recently posted this photo on his blog to help promote which Boeing aircraft will be showing up at the Paris Air Show later this month. Tinseth announced that the 747-8 Intercontinental, the 747-8 Freighter, the first 787 flight-test airplane ZA001, an Air Berlin 737-700 with the new Boeing Sky Interior, and a Qatar Airways Boeing 777-200LR will be present at the air show.

I hope the 747-8s are well received at the show. I’d really like to see these planes do well. Hopefully the entire Boeing lineup will garner great interest, and hopefully sales.