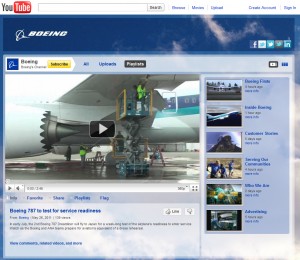 Social media has become a must-have for most large companies today. Some will approach it with a thought out approach and others do not really know why they are on social media, but just feel they are supposed to be on it. I have enjoyed following Boeing’s slow approach to social media and applaud them for recently adding a YouTube channel.

When I first started this blog about three years ago, the idea of Boeing being on social media was a very foreign concept. Slowly, but surely they have moved from being a company with a closed-door culture to being one that is much more open and shares what is going on with customers and fans of their product.

Boeing first started with operating three Twitter (what is Twitter?) accounts: @Boeing, @BoeingAirplanes and @BoeingDefense. The Twitter accounts cover much more than just repeating news that is already out in the public domain. They have had contests, shared unique photos and personally connected with some of Boeing’s biggest fans.

So why is Boeing on Twitter and YouTube, but not Facebook? Well, the Boeing Store has a Facebook account, but to date Boeing proper still does not. Is this a bad move? Possibly not. Boeing has been taking the “easy-does-it” approach to social media, making sure they master each one before moving onto the next.

When talking to Boeing, it is clear they are looking at how to expand their presence on social media globally, versus just American-based platforms.  “We are a global company, ” Todd Blecher, Director of Boeing Communications explained to Airline Reporter. “We need to find ways of becoming a global social media participant.” For example Twitter is not all that popular in China, so Boeing has decided to create a Weibo account to connect with local people and companies.

Adding a YouTube channel is smart, since Boeing is already producing the content. For a long time, Boeing has produced videos to share with employees and it has only been more recently that they have shared these videos via their website. Posting them on YouTube allows more people to view the videos and more importantly, it allows people to comment and interact with Boeing.

YouTube is not the only new thing for Boeing’s videos. On the recent American Airline’s Sky Interior delivery flight, there were only about 20 people on board and Boeing asked a few of the customer-fans who were invited by American Airlines to walk up and down the aircraft at 30,000 feet and give their impression of what they think. No script, no direction, just take a look at the aircraft and give your raw opinion (note: the video has not yet been posted). This is the first time that I have seen Boeing do something like this and it  really is a new level of connecting with fans.

Will Boeing continue to grow in other social media formats? I would assume so, but I have been impressed how they continue to better the social media channels they have now to best interact with people outside their company and I look forward to watch them grow.