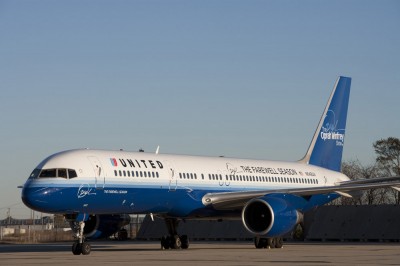 Man, United Airlines and their new livery has made a lot of blogs on here recently. Oprah has been making pretty good airline news as well. She gave her entire audience a trip down to Australia with Qantas and now she has her name on a United Airlines Boeing 757.

When I first received the press release all I could do was laugh, but okay I guess it makes sense. United is based out of Chicago and so is Oprah. But doesn’t Oprah always say “travel accommodations provided by… American Airlines?” I dunno, I haven’t watched it in years. Anyhow, United wants to help celebrate Oprah’s final season by creating a special livery.

Not only does the exterior have Oprah stuff, but the interior does too. On the inaugural flight, passengers had a special video message from Oprah and one lucky passenger won enough United Mileage Plus miles for a trip around the world. Everyone else got a special fleece blanket.

If you weren’t on the first flight, don’t worry. United is having a contest and giving away a million miles per month through May 2011, which is when the special Oprah livery will be taken off the aircraft.

Videos and Image from United Airlines

https://www.airlinereporter.com
Kiddie Wings Are Back via Delta Air Lines
IT’S ALIVE! Video of the New Boeing 747-8 Intercontinental Powering Up
7 Comments

Thatâ€™s one way to spend a lot quickly

Looks better than the new garbage. I really think they are not going to be painting any of the United planes in the new livery, they are coming up with something new.

My guess is they chose an old livery aircraft since they will have to re-paint it anyhow to get rid of the Oprah stuff, so why not pick a plane that will require a total re-paint here soon anyhow?