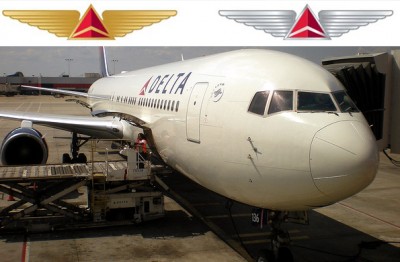 Delta's new kiddie wings. Which one will you choose? Click for larger.

If you follow the blog, you know I hate it when people say, “In the good old days of flying,” because most of the changes are from passenger demand, not airlines acting evil. Well, I am going to be some-what of a hypocrite and reminisce about the good ‘ol days when I was a kid. Back then I would get wings all the time from from airlines. Then as I got older, I would still ask for them, but many airlines stopped offering them.

Well guess what kids (and avgeeks)? Delta Air Lines is bringing back the kiddie wings! There are two variety that are available: silver that will come from the flight attendants and gold which would come from a pilot.

Delta started handing out the wings back in 1958 on their Royal Service DC-7s. Since times were a bit different back then, boys would be given “junior pilot” wings and girls would be given out “junior stewardess” wings. Today anyone can have either wings.

Morgan Durrant with Delta communications explained, “Kiddie wings are one of the most asked about items by our customers to crew members and we know kids and kids-at-heart will enjoy this iconic memento.” Heck yes we will. Now who will get theirs first?

Check out Delta’s blog for two photos and more information.

Yes! I still have mine from the early 90’s, when I was a kid! Go Delta! The only other carrier (that I know of) that does this is Allegiant, but they break pretty easy…

I second Jonathan’s “Yes!” I took my daughter on her first flight and had hoped that the airline had wings for her, but they didn’t! I was so bummed! I also love Delta Airlines, so this is a double score!