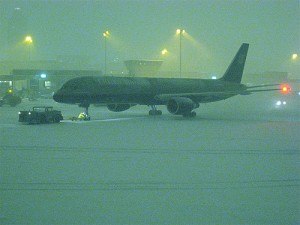 In a recent post, Brett Snyder with CrankyFlier greatly details the annoyances arising from the Department of Transportation (DOT) passing a passenger bill of rights. The DOT’s action comes after multiple  incidents of passengers being stuck on the tarmac for more than three hours.

Yes, being stuck on the tarmac is annoying. I have been there multiple times; the worst was for 5 hours on Reno Air about 12 years ago – with no food, no water, and a stinking bathroom. They even took us off the plane and told us to leave our carry-ons on the plane. We were in the terminal for about 20 minutes and then they tried to board us on another plane, until passengers reminded Reno Air that our carry-ons were still on the first plane. Once we boarded on the correct aircraft, there were two lawyers trying to pass around a sign up sheet for a class action lawsuit.

Please. That is the risk of flying. You know how long it would have taken for me to get from Reno, NV to Seattle, WA 100 years ago? Of all the thousands of flights every day, how often do we hear about these huge delays? A few times per year, maximum.

That being said, do I want to experience something like that again? Of course not. There are actions people can take other than pushing the government to regulate the airlines, though. When booking, choose an airline that has a good record of not stranding people. Help publicize incidents that make you feel mistreated (i.e. email me). Write to the airline about your dis-satisfaction. I feel the airlines have made improvements and I wish we could give them a bit more time to fix this issue than add government regulation.

I think regulation can be helpful in certain circumstances, although in the past, full regulation of the airline industry has led to higher prices and less choices.

You knew it was going to come, so here it comes.

While I agree with you the new rules really stink…

but you know what stinks worse?

Being stuck on the tarmac for 6 to 9 hours on a plane with an over-flowing toilet.

Do you know if anyone was fired for what happened to that CO flight at RST?

You are right, that would stink (literally and figuratively) and I wouldn’t want anyone to go through that. I would love to see an airline self regulate. “We guarantee you won’t be sitting on the ground for more than 2hrs, if so your flight is free, more than 3 you next three flights…etc” That would be an awesome marketing stunt!

This Christmas and New year winter a big blow to Airline industry. Cancellations and compensation would loss season to most European and American lines