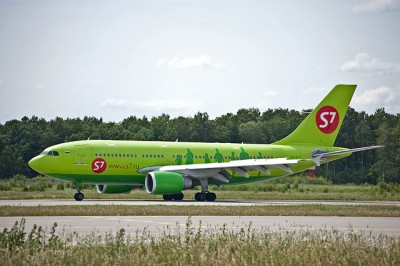 https://www.airlinereporter.com
American Airlines to Introduce On Board Happy Hour
Want Some Airline Humor? Check Out This Blog
8 Comments

The whole package is hideous. I’m grateful for you for showing us the ghastly interior of these airplanes.
If I had ever had the misfortune of just happening upon this visual nightmare prior to a long flight with S7 I’m afraid I’d run screaming from the plane and be arrested.

I’m tired of the navy blue and grey mania that is currently going on in the biz but S7 (stupid name too) gets the Alka Seltzer award for going over the top with the crayolas.

Yea, I am surprised by the colorful interior. I would have expected the neon-green theme to carry on to the inside.

I’ve had the pleasure of flying them last year from DME to PIE last year, fantastic service and the best part that you left out, smoking hot FAs :).

Just found your blog from Google news, can’t believe I didn’t come across it earlier, I love your Livery of the Week section, keep up the good work, you can bet that I’ll be visiting often.

Thanks Sam. If you also like airline livery just wait for the next Ultimate Livery Challenge (check out #3:https://www.airlinereporter.com/2010/10/answers-ultimate-livery-challenge-3/)

I guess this is in response to the old Soviet liveries of drab, drabber, and drabbest. It’s kind of like when my 9 year old son was taught to use Powerpoint to give a presentation to his class–he used every sound, moving picture and other obnoxious goodies until he realized they detracted from his presentation.

Haha, very good point. That is how my very first website looked too.

I think I’d take this over a flight on Untied any day.

I can’t help but think how much the A310 loooks like the B737 but in wide body. The interior would give me a headache and annoy the heck out of me if I flew on that long haul.