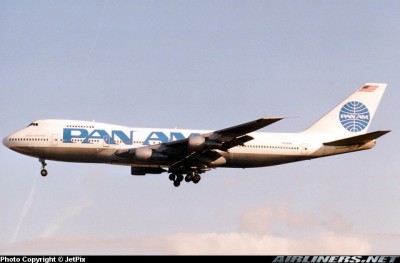 N724PA is, according to airfleets.net, currently stored Sana’a, Yemen as of last December, and most recently was registered as XT-DMK with Kallat El Saker Air of Libya. Google Maps satellite photos confirm a 747 at that airfield.

How did I miss that one? Most recent one I could find was 2005. Nice work. Yea, guessing she won’t fly again.

If you zoom in to the door in this poster, you will notice it reads “Jet Clipper Fairwind” and that it is also a 707.

Michael L – the link is broken–can you repair?

(data based solely on photo dates)

N724PA had a cameo in the 1993 film Hesrt and Souls with Robert Downey Jr. and Elizabeth Shue.

I know this is a longer after the original posts, but as an ex-Donaldson Airlines 707 driver, I can attest to the fact that N724PA (Boeing 707-321 powered by P&W JT4s) was used by Donaldson for crew training in Miami in March 1972 still under the guidance of a PanAm training Captain. I flew N724PA for 10 hours of circuits at Dade Collier Airfield and Miami International under the kind supervision of PanAm’s Chief Training Captain, Max Husted. What an aeroplane it was then, but the old smokey JT4 was already outdated by the JT3D-3D of the later model 707-320B and C. Happy days, sad about the 747-212B which later became N724PA but lies moribund and deserted in Sanaa.