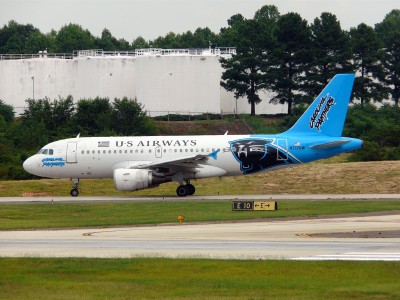 US Airways Airbus A319 (N717UW) in Panthers Livery

Go Panthers! Or at least go US Airways Airbus A319 Panthers. US Airways also flies Pittsburgh Steelers and Philadelphia Eagles liveries representing the cities with US Airways hubs. The football season just started, so a great way to celebrate. Although I enjoy watching football-themed liveries more than the game itself.

UPDATE: How could I forget the US Airways A319 dressed as aÂ Cardinal?! Thanks @TaylorMcManus for pointing that out!

I really like the Panther livery with the color, but it just looks odd that the panther is not on the tail, instead there is small writing.

Thanks Drew V for sending over this photo!

This is cool! I wish SW would paint planes in the team colors of the sports teams of which we are the “official airline.”

Dang it! I am showing my lack of football-knowledge 🙂 I have updated it — thanks!