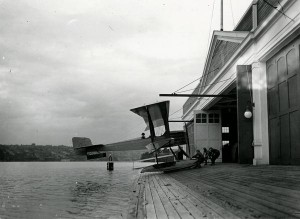 The first Boeing plane at their first assembly building, on Seattle's Lake Union. Picture from Boeing.

94 years ago today, the Pacific Aero Products Co was founded by William E Boeing in Seattle, WA and it has been an amazing ride since! Some key moments in their history:

1917: The company was renamed to the Boeing Airplane Company.

1933: Due to new regulations, Boeing was split into three companies: United Airlines, United Aircraft Corporation and the Boeing Airplane Company. This is the year that William Boeing also left Boeing.

1960: Boeing purchased Vertol Aircraft Company which got them into the business of helicopters.

1969: The first wide-bodied airliner, the Boeing 747, has its first flight and changes airline transportation forever.

1981: The first wide-bodied, twinjet airliner, the Boeing 767 has its first flight.

2001: Boeing moved its corporate headquarters from Seattle to Chicago.

2009: The much anticipated Boeing 787 Dreamliner has its first flight.

To read more about Boeing’s history, be sure to check out their huge history section on their website.

https://www.airlinereporter.com
Russian Prime Minister and Aeroflot CEO Argue on Aircraft Types to Purchase
Boeing 787 Dreamliner Deliveries Could Be Pushed to 2011