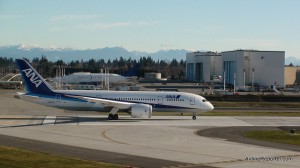 Photo of Boeing 787 Dreamliner ZA002 with ANA livery taken at Paine Field during its first flight.

Boeing announced today that they hope to still deliver the first Boeing 787 Dreamliner to All Nippon Airways by the end of the year, but the delivery could be pushed into early 2011. Boeing points to issues with instrumentation configuration and problems with the horizontal stabilizer as reason for the possible delay.

“We have seen some test instrumentation configuration changes that have taken a bit longer than we had planned,” Scott Fancher, vice president and general manager of the Boeing 787 program  said in a call with reporters. “That coupled with some of the inspection work that we’ve seen recently has led to a little bit of schedule pressure.”

It is unfortunate that this announcement will have a lot of people complaining about the Boeing 787 being delayed again. We must all remember, this is the next generation of aircraft and it is extremely complex. Boeing used companies all over the globe to build this plane and it is important to make sure the aircraft is 100% ready before being delivered to airlines. If that takes a little bit longer, I am alright with that. I rather the 787 Dreamliner be delayed a bit more than it pre-maturely gets delivered before it is ready.

Years from now, no one will remember how delayed the plane was…they will only remember how it ushered in a new era of air transport.

Delayed again? I guess we should have seen this all coming. I have waited this long, I guess I can wait a bit longer.

Really, I personally think this is a good thing. It really doesn’t matter that people are frustrated about the delays. Would you rather be safe on the 787 or would you prefer to get it earlier? Pretty simple answer for me. I agree with you 100 percent David, that they need to ensure it’s perfectly ready to go.

Furthermore, you don’t want to have a disappointed customer (the airlines) who may report problems with the Dreamliner. This is a lot of money we’re talking about.