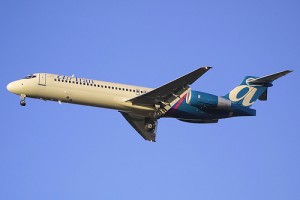 One of about 85 Boeing 717's that AirTran currently flies.

The Boeing 717 is very similar in size to the Boeing 737-600, but Boeing felt it could successfully market both aircraft. The 737-600 is more suited for long hauls, and the 717 for short ones. The name “717” had been used to promote the Boeing 720, but that was short-lived and the name was never fully resurrected.

The aircraft was marketed to airlines with aging DC-9’s that needed replacements. Customers such as Northwest Airlines and Qantas Airlines started to see how efficient and cost effective the planes were, but they did not produce enough sales, since most airlines were moving to aircraft commonality.

Also, the 100 seat market became competitive with Bombardier and Embraer making fierce competition. In January 2005, Boeing announced it would cease production of the jetliner and the last Boeing 717 rolled off the assembly line in April 2006. It was delivered to AirTran on May 23, 2006, which was fitting, since AirTran was also its launch customer.

Now the former Boeing 717 manufacturing site, located in Long Beach, CA is being converted into a $375million movie studio across its 77 acres.

Flying on a Boeing 717 almost feels like traveling in time. Being able to fly on an aircraft that looks very similar to the DC-9, but built almost 40 years later, can be an exciting experience.