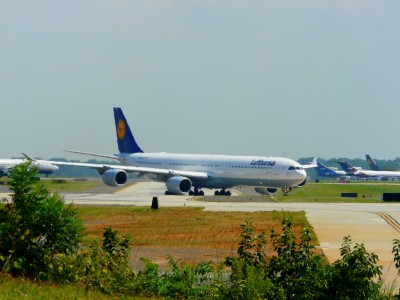 There are a lot of good places to look at photos of airliners. I can spend hours going through and looking at them. Some of my favorites are those from readers that send in ones they have taken and I really want to be able to share them. If you take photos of airlines and want to share, feel free to email them on over and I might post a few as well.

This one is taken at Charlotte Douglas International Airport (CLT) by Drew. You can see a Lufthansa Airbus A340 getting ready to take off, as well as a US Airways Boeing 737 on the left. What’s really cool about this one is you can see two Boeing 727-100’s in the background by the UPS Airbus A310, that are still flying,

Those two Boeing 727-100’s are owned by Jack Roush with NASCAR. They were converted to have 90 seats and used to shuttle NASCAR crew from one race to another. It looks like Roush bought both planes from MGM and they spend quite a bit of time at CLT.

Life is full of irony. Less than 24 hours after you posted this, Jack Rouch was involved in a “hard landing” with one of his jets (up in Oshkosh, WI), which was pretty well destroyed. No serious injuries for either he or his passenger.

This is the third aircraft crash that Jack Rouch has been involved in, and he has walked away from all three. He must live a charmed life. He also owns a P-51 Mustang, one of the great warbirds of all time.

Yea talk about odd timing for sure. Maybe Mr. Rouch should stick to flying in his B727’s 🙂