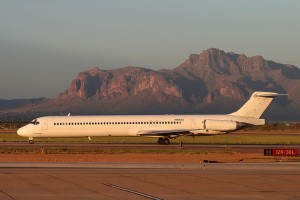 Although it is more humane then I expected, it still hard to swallow the cost per inmate. Also, I thought that immigrants that where transported were simply left at a US border town and then driven to a nearby Mexican Border town. I mean, they don’t have to deal with CUSTOMS!!! That would be so nice!

Transporting prisoners this way is actually quite a bit more cost effective. Think about the Harris-Moore situation. Sending two officers from Seattle to Miami to escort the prisoner would have cost a lot more.

It also isn’t very viable to fly a criminal on normal air transportation, because again you need at least two officers to escort them and who wants to fly with someone with handcuffs on?

I’ve been on the plane in that picture!! Seat 2F — not as a prisoner, but as a passenger from Seattle to Oakland back in 2005. Something tells me that the service isn’t the same as when it was part of the Alaska Airlines fleet. 🙂

Wait a second, you remember the exact plane and seat you flew on 5 years ago?!

I keep all my flights and N-numbers in an online database. I can look it up and tell you that a year ago tomorrow, I flew on N937CA and N800AY. Also much thanks to bts.gov.

You don’t keep a flight log? I keep my flights and N-numbers, (and G-, C-, VH-, D, and PH- numbers as well). There are two good online databases for that. Both generate cool maps.
http://my.flightmemory.com/RedTape
http://openflights.org/user/RedTape

Thanks, David. What a great story, you really answered all my questions!! So our Feds have quite a fleet of planes. And you are right, this is probably the most cost effective way to accomplish these transfers.

I saw a 737 recently at LAS that I wondered if it was one of these.
Solid white, no markings except an N number … N280DP, I think. It was pretty far away.
I searched the FAA N-Number database and didn’t find it, BUT it might not be listed.
Anyone have an idea?

Actually another blogger Flying With Fish just talked about this recently. Take a look:
http://boardingarea.com/blogs/flyingwithfish/2010/11/08/reader-mail-what%E2%80%99s-the-deal-with-the-red-striped-planes-in-vegas/

My son emailed me that the only way they can legally transport prisoners shackled,, under FAA regulations, is to classify them as “produce”. To your knowledge is this correct? If so it is a travesty.

your son is partially correct he’s referring to commercial airlines (ankles) must be free but are required to be handcuffed in front.
conair flights do not follow the same rules because there under a different certicate.

Did you “get” to fly as a passenger? Or as crew?

And a bag of water?

I have personally flew con air however it was the most horrifying exp I have ever had in my life it started out me living in south carolina wrote a bad check in South Dakota they extradited me for this 3700 dollar check for a car that I wrote I have never flown on a plane in my life I had no intention of ever flying period. I was pale white when I got off the plane. I got stuck in Oklahoma city transfer center overnight and heard planes all night long I guess thats the big airport there. The us marshalls never tell you the time the nurse on flight gave me a xanax to calm my nerves it still did nothing for me the one us marshall lady was so sweet she let me know when the plane was decending my making hand movements at me wich they are not supposed to do but she knew I was not some major risk criminal trying to plot anything she saw how scared I was and her heart really went out to me. They did feed us from Atlanta GA to Oklahoma city a bagged lunch it was blonga sandwiches chips and a bottle of water and a gronola bar. The lady sitting next to me was sweet and held my hand we must have stopped at a dozzen airports looked like a few of them were military bases bus loads like grey hound type busses would be waiting at the different airports for inmates getting on and getting off hillicopters would fly around with guns securing the area. The plane its self was kinda small they did let me go to the bathroom escorted but stand outside the door. Women sit infront of the plane men sit in the back I remeber walking past the men going to the bathroom and they all stared at me and smiled and licked their lips LOL because they aint had a woman in God knows how long.. and they made comments they saw me crying they kept saying I was gonna be ok I was the only one that seemed to be so freaked out but the us marshalls never told the guys to shut up we were allowed to talk on the plane it was actually alot of talking some guys sang people talked and laughed you are handcuffed and shackled with a pad lock I think it was 3 of them.By the time I got to my destination I think I was on the plane for like guessing 6 hours going all over the place I remeber seeing a cop car from IL to pick up some inmates they call your name at your destination on a sheet of paper like a roster and then they call your name again after those people get off so they know that the people who are supposed to get off at the right place do. Kinda like a roll call It was the most craziest exp I have ever done. Matter of fact the us marshalls let me litterally kiss the ground when I arrived in south dakota and they said I have now earned my Con Air wings hahhaha what a learning experience that was needless to say I got there and the charges were dropped and I went on to college to be a great person and wonderful member of society and changed my life gave it to God and my life is beautiful today I learned a good lesson…never fly again… period.

Actually the numbers I believe are artificially inflated. I have learned on airline forums that a lot more prisoners then you think are transported on normal flights but they hide the handcuffs from view.

Many times prisoners who are low risk go on a public greyhound bus which they are warned if they don’t make it to their destination it’s considered an escape charge so most make sure they do.

Prisoners going on a bus by themselves? Really?