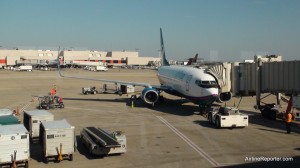 What better way to test out the things I learned than flying home via AirTran?

After my second day sitting in on classes, I left the AirTran training center and headed straight to Atlanta International Airport (ATL) for my AirTran flight to Milwaukee (MKE), then back home to Seattle (SEA).

Yesterday I looked at how some airlines provide very little space for passengers, but on this trip, I was lucky enough to test out AirTran’s business class (which has a seat pitch of 37″ — ah yeah!). In Business Class, the seats are bigger, you have more room, free drinks and premium snacks. Being up front also gave me the opportunity to watch what the flight attendants were doing and see if they were doing everything I just learned about earlier that week.

On the flight home, I had a totally different perspective than I had on my previous flights.  Like most frequent fliers, I feel like I know how everything works and I don’t need to pay attention.  This time, I couldn’t help but notice how the flight attendants did the safety announcements and prepped for the flight.

Once all the passengers boarded, I could see the flight attendants close the front door and arm the slides. When I heard the call, “cross check, all call,” this time I finally knew what it meant. Each flight attendant double checks to make sure both doors in the front and back have the slides armed and then call back, “cross check complete.” This is also done after reaching the gate to make sure the slides are dis-armed.

Once we hit that 10,000 foot mark, it was time to get on to the internet. AirTran and  GoGo In-flight were offering WiFi for 20% off, so how could I refuse? Cost me less than $10 and let me have access to the internet on both legs of my flight. 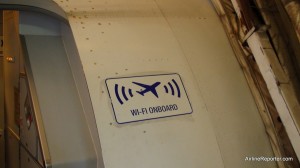 Every AirTran flight has WiFi, which is awesome!

The flight from ATL and MKE went very fast. I caught up on some blogging (what better way to be inspired than blogging at altitude). The leg was uneventful and I enjoyed my free adult beverage and premium snacks. I ended up not having a talkative neighbor and that was ok with me.

When leaving ATL we were told that those of us continuing on to SEA would stay on the same aircraft. Fine by me, I could just surf the internet while waiting. Once we landed, I sat on the plane while others de-boarded around me. One of the flight attendants was standing in front of me thanking the passengers and I started talking to her about how many flights she had left. She told me this was her last flight for her and the plane. I thought she might have just been messing around with me. Turns out, she wasn’t. 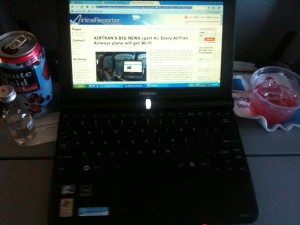 With the extra room, my netbook easily bit on the tray and in Business Class you get free drinks!

While in flight AirTran changed plans and now people flying to Seattle would have to change planes. Between that decision being made and us landing at MKE, no one had informed the passengers. Not a big deal, this just meant I got to watch a totally different AirTran crew at work.

In my hurry to get to my next plane, I accidentally left my carry-on bag in the overhead bin.  While waiting in the jetway an AirTran pilot who was dead-heading (not flying but commuting from one place to another) asked if I needed help and went to get my bag (since he had the spiffy uniform on, people got out of his way). That was very nice of him, since it was not expected.

There were probably about ten of us who had to change planes who were on our way to Seattle. Most of the others were upset that we weren’t told and found this to be a huge inconvenience. One guy even mentioned that AirTran was definitely going to hear from him about this incident. Really? I mean this stuff happens. The airline business is very complex and planes have to be moved around all the time. We all got our same seats, and left right on time and got to stretch our legs.  Not a big deal to me.

I spent two days training with AirTran flight attendants, I flew two flights with two different flight crews from ATL to SEA…how did they do, you ask? Well it depends. Did they do every little thing they were originally trained to do? No, but that seems okay. How many of us do everything exactly the same way we are trained at our job? If I was just a normal passenger, not knowing all the specifics, I would be very impressed.

For example, in Business Class, trash is supposed to be taken away on a tray (vs the economy class uses bags) and bags were used on one of the flights. Do you think anyone came close to noticing that? No. Did passengers get less for their money because their trash was picked up in a bag? I surely hope not.

One of the things I enjoy most about flying on AirTran is that I know that on every plane, every flight will have internet and XFM radio. That is something that’s important to me. AirTran believes consistency is important on every flight; not just with the amenities available, but the type of service that passengers receive. On a flight that takes me 10 hours to get from one side of the country to another, I sure am willing to pay more knowing I will have Wi-Fi: something you can’t always get with others airlines.