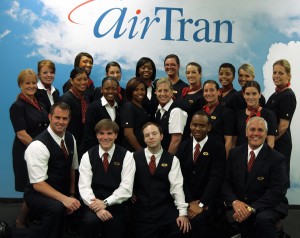 Yay! The graduation photo of the newbie class I sat in on!

On this final post I just wanted to talk about some thoughts I had about the experience that didn’t fit into one of the other blogs.

I was originally set up to sit in on two classes for the first day, but the trainers did a great job of moving me around to a  bunch of different sessions. The cool part was most students didn’t know who I was until the second day, which meant they weren’t behaving just for me. 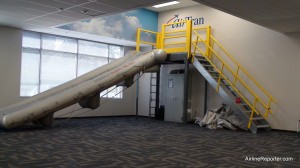 Unfortunately I wasn't able to slide down their practice slide during my visit!

The classes and personnel there were all very professional, but also fun. There were some very serious topics discussed, but everyone was able to have a good time and laugh. I personally think building a positive relationship with your co-workers and the company you work for is very vital in the training process.  By the end of the second day I really felt part of the AirTran flight attendant team.

During my life, I have had to sit through way too many boring PowerPoint presentations, but luckily the ones at the training were far from boring. I flew a red-eye from Seattle to Atlanta, got three hours of sleep and went right to the training facility, but I didn’t yawn once since it was interactive (I was yawning the second day, not from lack of interest, but lack of sleep catching up with me). 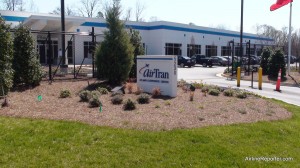 As I showed you, on earlier blogs, the training is very hands on. You aren’t just sitting in the classroom, but out in the mock setups where flight attendants learn how to open/close doors, use evacuation slides, practice safety procedures, try out their in-flight service and much more. 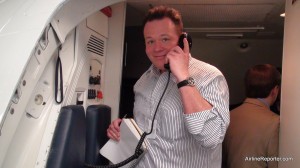 That's me. Telling the passengers to sit down and shuddup because we are leaving!

The overall training for new flight attendants lasts about four weeks and is quite intense. About five of the new students that I met were flight attendants from other airlines and wanted to change employers since they heard good things about AirTran. One of the trainees, Alan (Hi Alan!), said this was the best training he had since PanAm. That is a huge compliment since PanAm was known for their amazing training.

Last Friday, April 16th,  all the newbie flight attendants I met graduated and will start completing test flights to hone  their skills before being released into the wild. CONGRATULATIONS TO ALL OF YOU! Now they will ride on some flights to be tested and then end up on the bottom of the seniority list for which flights they have. 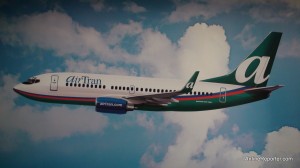 A nice AirTran Boeing 737-700 drawing in the trainer's break room.

Seniority seems to be a pretty big deal in the airline business. The higher up you are, the more benefits you get. Flight attendants will be flying 20 days of the month and off for ten. Those at the bottom of the food chain (ie newbie hires) get last dibs on what days and flights they will fly on. It was interesting that to determine seniority for those in the class, BINGO balls were used.

I went into the training, not quite sure what I was going to get out of it.  I think there are a lot of misconceptions of what flight attendants do and the glamor of traveling the world and just serving drinks. I hope  this blog series has let you see how complex and important the flight attendant’s job really is. Almost every flight attendant I spoke with says it is the best job in the world and they couldn’t imagine doing anything else. To me, that is pretty cool.

A special thanks to AirTran and all the wonderful people that made this blog series possible!

I have updated my Flickr account with some additional photos taken with my iPhone and the flight attendant’s graduation picture.

Thank you for the insight of becoming a flight attendant. My daughter is set to start class in either Feb or March. We are all very excited for her & believe this is just what she needs at this stage in her life. She’s 24 1/2 & has been a server for an Italian retuarant for 7 years, I told her now she needs to take those skills to the sky. Again, thank you for the wonderful blog.

how to become a flight attendant
February 1, 2011

Thanks for the wonderful post. Pat, I’m excited for your daughter. Working in the service industry has definitely prepared her to deal with clients. Just important to keep in mind that Flight Attendants are not simply waiters in the sky. Alot more to it that than, but I’m sure your daughter will be fine:)