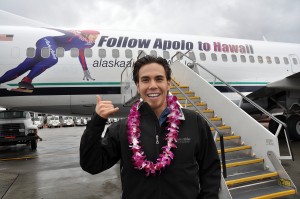 “What better way to celebrate the most decorated U.S. winter athlete in history than to give fans the chance to say ’˜congratulations’ from Maui,” said Greg Latimer, Alaska’s managing director of brand and product marketing.

Would be a great trip

Primal Sky “Rola La Ola” is the theme song in the surf DVD “A Fistful of Barrels.”

i have never been to HAWAII IM 64 JUST LOST MY HUSBAND AFTER 40 YEARSMY FIRST HUBAND DROWEND LOST MY BROTHER, SISTER,SON ,MOTHER ,FARTHER,I LOST MY HOME , IT WOULD BE NICE ONCE IN MY LIFETIME TO HAVE SOMTHING WONDERFULL HAPPEN I WOULD LOVE TO GO TO HAWII, IT WOULD BE A DREAM COME TRUE ….THANK YOU SO MUCH FOR OFFREIG A GRET DEAL …IN HIS LOVE CINDY JOHNSON.