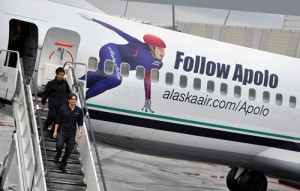 Apolo Ohno getting off the plane with his face on the side.

The Winter Olympics in Vancouver, B.C. are right around the corner. Alaska Airlines (based in Seattle, WA) is celebrating the Olympics with a special themed Boeing 737-800Â displaying a picture of Apolo Ohno on the side. Ohno isÂ one of the most decorated speed skaters in historyÂ and also a winner on “Dancing with The Stars.” Ohno is a Seattle native and a local celebrity.

Brad Tilden, Alaskaâ€™s president, stated, “The â€˜Follow Apoloâ€™ jet will fly across our route system to build excitement for this great American athlete.â€Â

When seeing the plane for the first time, Ohno said, â€œItâ€™s an honor to be featured alongside Alaskaâ€™s trademark Eskimo and have the support of my hometown airline for the most important race of my life.â€ It has to be odd to see a bigger-than-life photo of you on the side of a plane. There is also a website where fans can follow Ohno’s quest to be the most decorated Winter Olympics athlete in history.Â

This aircraft adds to Alaska/Horizon’s great collection of themed liveries.Â Â Check out more photos of the event.

https://www.airlinereporter.com
Air Austral Plans to Cram 840 Passengers in an Airbus A380
Passenger Kicked off Flight Could Owe $66,000
4 Comments