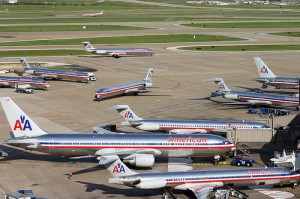 The latest in RFID tech, paired with mobile devices like this, are great tools when it comes to baggage tracking. My last flight, on US Airways, my bag was gate-checked (there was no room in the overheads in a full A321). The flight attendant did not have any yellow US Airways gate-check tags, so a napkin was used – the bag was lost for a day. It’s when the technology is not used that airlines lose luggage. Sorry to hear your bag was lost. 🙁

Haha, a napkin? That doesn’t sound very professional at all. Seeing how my bag gets beat up when checked I don’t think a napkin would have stood up to that!

This technology wouldn’t have helped with my one and only lost-bag story. But it was a far-from-normal circumstance. We were told by Air New Zealand staff in the departure gate in Queenstown NZ that the plane (an A320) had experienced an electrical problem. They couldn’t remove the bags from the plane, and couldn’t load ours on board either. Bizarre. Upon arriving in Sydney, of course everyone on the flight filed missing luggage claims. When I asked, the customs staff in Sydney said a planeful of lost luggage claims happens maybe once every three years for them. (BTW, that was 3 years ago.) Qantas handles those claims for the Sydney Airport, and was good at keeping me updated about its progress when I called the support line. My bag got there the next afternoon, waiting in my hotel room since I had told the staff that Qantas was going to deliver it. I heard Air NZ had expected to take the luggage by truck from Queenstown to Christchurch before flying to Sydney. (So for that route, odds were my bag flew on a Boeing.) But keeping me informed and delivering it to my hotel made it right as far as I’m concerned.

In that case, any new tracking technology wouldn’t have helped. Because it wasn’t a problem of not knowing where the bag was. However, for more normal circumstances, it sounds like it should help a lot. We already know similar tracking technology revolutionized package delivery.

Wow, that is a crazy bag story Ian! Although with the right technology (the plane working) your bag wouldn’t have been lost 🙂

Technology is certainly helpful in tracking bags, but it will not, all by itself, eliminate the problem. 2 things have to happen up front to lessen the possibility. 1) The correct layout and procedures have to be in place up front, and 2) most importantly there has to be a system that tracks performance in that area so workers understand that there is a high level of acceptance by management coupled with constant follow up and feedback. People that get performance feedback and are held accountable can do a remarkable job. Having spent 9 years at UPS and 7 years at Fedex Ground, I can attest the quality job that can be done correctly at a high rate of speed. I know airlines must have some unique problems in handling bags, but ultimately it boils down to what is deemed to be an acceptable level of error by the company. Poor expectations and lack of attention will cause lost bags.

I would love to improve performance for an airline in that arena. I bet it would be a vacation compared to unloading, sorting, and unloading 60,000 packages per hour, day in and day out.

Well believe it or not there is a relatively straight forward and inexpensive solution to this Multi-million baggage lost problem.It is technology based , complements the RFID initiatives currently under trial BUT it is customer centric NOT airline centric.
Here is the real problem I cannot find a single airline or luggage manufacturer who will give me the opportunity because of “not developed or invented here mentality”.
I happen to be a 40 year world wide travel vetran and yes I’ve lost bags over those 40 years.
So I designed a solution which has travelled the globe with me for the last three years (I think they call it field trials in the marketing jargon) BUT can’t get traction from the industry and certainly not the luggage guys. I guess they only want to replace the lost bags?
Any ideas how to move this forward?

The last 5 out of 6 times a family member or I have flown American Airlines, our luggage has been lost. In one overseas trip, it was lost for 5 days until my son went to the airport and found it locked in a back room along with the luggage of his 4 companions,and then they lost it again on the trip home! Unbelievable.. I will never fly American Airlines again.

Wow Mary, that is really annoying for sure. I know that most airlines have some horror story like that and it is frustrating. The benefit is there are a lot of airlines out there to choose from and we can only hope they will get better at not losing bags!

Continental Airlines recently lost a bag of mine filled with irreplaceable possessions. This bag was a carry-on â€“ not a checked, a carry-on — bag and was moved without my knowledge or permission from the overhead bin. No one has seen the bag since.

This took place on my way to Rhode Island to attend the graduation ceremonies for members of the Initiative to Educate Afghan Women. The First Lady, Mrs. Bush, was scheduled to be there and so, due to the nature of the events, I had packed some good clothes and jewelry and decided to take everything in one carry-on. A flight attendant helped me place my suitcase in the overhead bin a few rows away from mine
as the space above my seat was taken.

After the plane was taxiing on the runway, I was informed that the Continental staff had moved my bag — supposedly to the lower storage area of the plane. In order to find whose bag it was, the Continental staff had gone into my suitcase and from my purse they got my return ticket and my name! Yet they did not have enough sense to at least give me my purse or to see if I needed anything (such as my medication) or wanted
anything (such as my jewelry) from the bag. Although they knew from my ticket that I had a connecting flight in New Jersey, they still didn’t gate check my bag, which would have allowed me to retrieve it upon exiting the plane at Newark to make my connection to Providence. Instead, they told me that they had checked it all the way through to Providence and handed me a handwritten number. Unsurprisingly, the bag vanished, along with my jewelry.

This is the most bizarre action I’ve ever known an airline to take with respect to a passenger’s carry-on luggage, and may well be the most egregious case of airline carelessness you have heard.

Still, it doesn’t stop here. Now Continental is claiming no responsibility and have retained Fulbright and Jaworski to fight me. They asked for receipts of all items over $100 which I told them I did not have, so — per their request and suggestion — I supplied them with credit card statements and personal letters from store managers who have records of my purchases. I thought that Continental had agreed to honor this information, but absolutely nothing came of it.

They took entirely unnecessary, unapproved, unilateral action over which I had no control and which directly resulted in the loss of my property. There was nothing I could have done to prevent this, and now they choose to pay exorbitant legal fees rather than
compensate me for the loss they caused.

American Airlines wants to do what? Yeah and I want to be 4 inches taller. 🙂 I don’t think that will ever become a reality with the current system in place. There would have to be some major changes to the way that lugguage is handled all over the world as everything is interconnected, one must not forget that little aspect of things.

American Airlines right up there with DELTA…lost luggage and do not care. I have had two instances with them for lost luggage and both times they have been unprofessional to the point of rude. I don’t know any other business that could provide service like this and still be in business. I would be embarassed to work for a company with these low standards.

It does not work! This article made me laugh. I am traveling from DFW with 2 friends to Italy to celebrate our 60th birthdays. We left Dallas 5/14 for a 2 weeks trip that we have been planning for a year. Today is 5/22 and we still are without our luggage. We have lost many hours of our dream trip to a country that we have wanted to see for a lifetime;on the telephone with American and shopping for clothes that we do not want. Our call with a manager, Skye Weatherly, in Dallas was very upsetting as she was very rude to all 3 of us. (I have 20 years of customer service experience and she was really bad) Currently we have travled to 3 cities wearing the same pair of shoes and buying cheap clothes that we will never wear again. My last call on Saturday 5/21 to check on our bags; that were going to be delivered to our hotel on 5/19, I was told that since our bags have been lost for more than 5 days, I will need to talk with Central Baggage. I was transfered there to only get a recording telling me that their hours are Monday to Friay only. At that point I lost it. My birthday is in 4 days, do you think I will have my luggage? America Airlines has lost my business not so much for loosing my luggage, but for the very poor customer service.