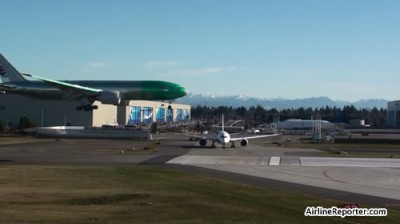 I took three videos earlier today while watching the Boeing 787 Dreamliner ZA002 taking off that you might find interesting:

#2 BOEING 787 SPOOLS UP: Testing the engines out, the Boeing 787 Dreamliner starts its engines allowing one to hear the jets in action (make sure you have the sound up). Notice how this is quite a bit louder than actual take off and the horizontal stabilizers and wing-tips shaking.

#3 BOEING 787 ZA002 TAKING OFF: What a beautiful day to watch the Dreamliner lift off. From the Future of Flight’s Strato Deck, one can see Mt Baker to the north and Mt Rainier to the south (sorry it is a little jumpy — first time with new tri-pod).

Other great finds:
* Video from Future of Flight of the takeoff
* KIRO 7 has video from their helicopter (I need to get one of those helicopters to video this stuff)
* Update by Guy Norris over at Aviation Week on ZA002’s progress